Everything We Didn't See at the Royal Wedding

What happened after the new duke and duchess stepped away from the cameras? 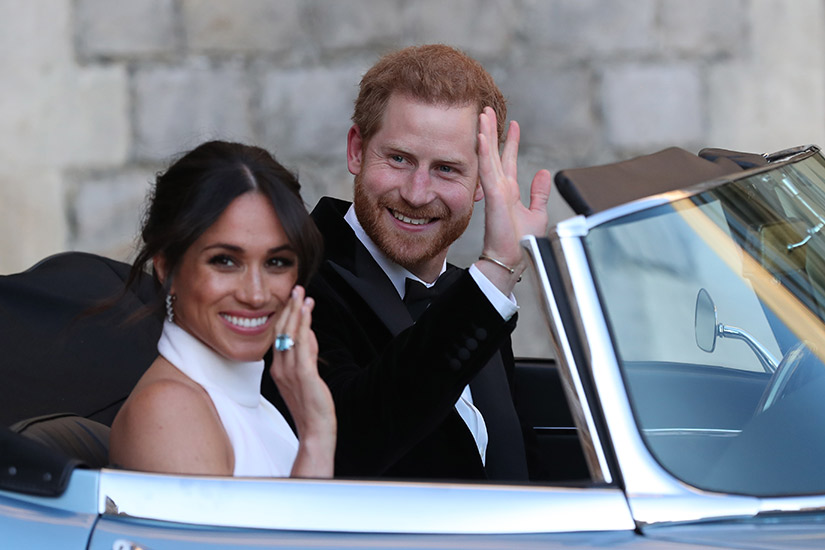 Saturday was a gorgeous day for a royal wedding and it was well worth waking up early to obsessively track every moment at St. George’s Chapel at Windsor Castle. But Prince Harry and Meghan Markle, the newly-minted Duke and Duchess of Sussex, had to step away from the spotlight eventually. Here’s everything that went down after the cameras turned off.

Meghan wowed everyone in her gown (designed by British designer Clare Waight Keller for Givenchy) including her groom. After the ceremony, Waight Keller revealed to The Guardian that Harry went straight over to her and said, “Oh my God, thank you. She looks absolutely stunning.”

THE SKETCH: Her Royal Highness the Duchess of Sussex wore a #Givenchy Haute Couture gown custom designed by @ClareWaightKeller as a timeless piece to emphasize the iconic codes of the House throughout its history as well as to convey modernity through sleek lines and sharp cuts. #RoyalWedding #MeghanMarkle

Harry asked the legendary musician to perform at the couple’s first post-wedding fête. The singer, who was close friends with the late Princess Diana, of course obliged and sang “The Circle of Life,” according to People. John also later played four hits at the evening reception.

There were free slippers

Always considerate, the newlyweds made sure slippers were handed out to guests after the nuptials so that they could kick off their heels and get comfy. Pretty Little Liars star Troian Bellisario (who attended with husband and Meghan’s on-screen love interest Patrick J. Adams) showed off her pair with some of the Suits cast on Insta.

And Harry gave an emotional speech

Also at the lunchtime reception, Prince Harry grabbed a mic to give a speech of his own. According to ET, he gave a touching tribute to his mother and sweetly thanked Meghan’s mom, Doria Ragland, for allowing him to marry her daughter. There were also cheers in the crowd of 600 every time Harry referred to Meghan as his wife.

Meghan carried a piece of Princess Di with her

The royal couple made one last public appearance while leaving Windsor Castle to head over Frogmore House for their private evening reception. Meghan stepped out in her second dress, a gorgeous Stella McCartney gown with a halter-style neckline and a stunning ring on her finger that immediately captured everyone’s attention. That ring was a lovely tribute to the late Princess Diana—the emerald-cut aquamarine ring came straight from her personal collection.

I am so proud and honoured to have been chosen by the Duchess of Sussex to make her evening gown and represent British design. It has truly been one of the most humbling moments of my career. Congratulations Harry and Meghan! x Stella

Harry and Meghan saved their first dance as newlyweds for their private evening reception (only 200 people were invited to the celebration hosted by Prince Charles at Frogmore House). The song they chose? The Telegraph reports that the duo hit the dance floor to Whitney Houston’s classic “I Wanna Dance With Somebody (Who Loves Me).”

The party was basically all fun and games

Per Page Six, late night host James Corden served as MC for the night, there was a royal dance-off between Harry, Wills and Charles, Idris Elba took a turn behind the DJ table, “dirty” burgers and cotton candy were served at midnight and George Clooney danced with both Meghan and Kate Middleton. There were even a few rounds of beer pong and tbh, we feel bad for whoever went up against Serena Williams—they didn’t stand a chance.

There were on-theme cocktails

Guests had a chance to indulge in specialty cocktails, custom-made with the bride and groom in mind, according to the Daily Mail. Made up of rum and ginger, the drinks had an adorable name to boot: “When Harry Met Meghan” (awww).

There were also literal fireworks

Meghan and Harry’s crackling chemistry transferred over to the sky with a late-night fireworks show. What better way to celebrate their love?

FIREWORKS OVER FROGMORE! I spotted this beautiful display over Harry and Meghan’s evening reception on my way back to the hotel last night. Just before they got together two years ago, I interviewed Harry in Orlando and he told me how excited he was to see the Disney fireworks every night and it reminded him of going there as a child with his mum Princess Diana. I bet this was his special request for their wedding party! ❤️??

Meghan had bracelets specially made for her BFFs

As People reports, six of Meghan’s closest BFFs, including Jessica Mulroney and her new sister-in-law Kate Middleton, left the wedding with bespoke bracelets commissioned by the bride herself. Aptly called the “Kensington,” the yellow gold disk bracelet was designed by California-based brand Zofia Day and are now available online for $450 (U.S.).

The wedding flowers had a second life

Following royal tradition, Meghan’s bouquet was sent to Westminster Abbey to rest on the Grave of the Unknown Warrior. The moving tradition was first started by Queen Elizabeth’s mother, who left her own bouquet at the grave in memory of her brother Fergus, who died during the First World War.

As for the rest of the flowers used to adorn St. George’s Chapel, Meghan and Harry donated them to London’s St. Joseph’s Hospice, to all the patients, the facility shared on social media.