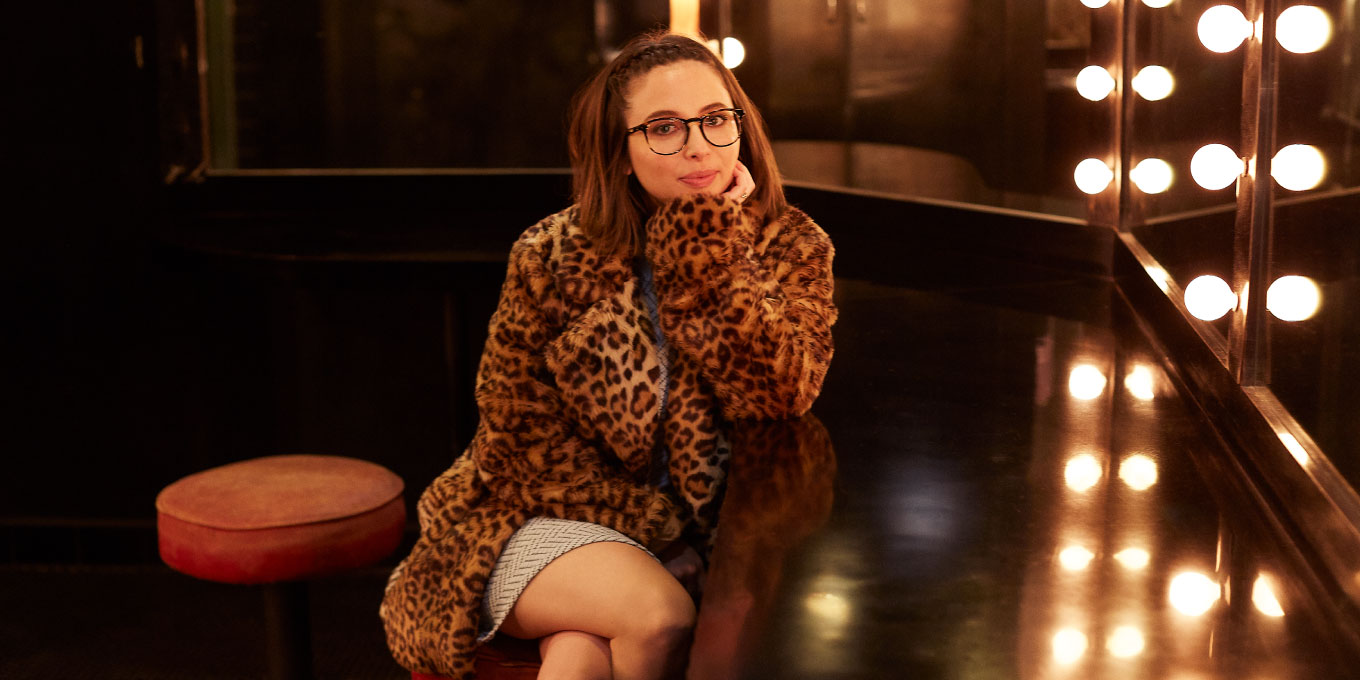 “We all have such similar goals,” actor-comedian Esther Povitsky says of her Dollface co-stars. It makes sense, considering her colleagues – Kat Dennings, Shay Mitchell and Brenda Song – in the comedy (which is streaming on Crave) are all L.A. best actresses starring in a show about female friendships. Bonding is to be expected, but what Povitsky and her on-screen BFFs connected over may be…slightly unconventional.

“One day Shay showed up to work with a giant hydro jug that looked like two gallons could fit in it,” the Chicago native tells us when we reach her by phone. “Then the rest of us ordered one and we would all motivate each other to drink more water. We have a little sisterhood.”

When Povitsky isn’t starring as the scene-stealing Izzy in the laugh-out-loud, Margot Robbie-produced satire (Dollface was just renewed for season two), she can be seen during stints on hit series like Crazy Ex-Girlfriend and Brooklyn Nine-Nine. She’s also a comedian, and can soon be caught performing in Vancouver at Just For Laugh NorthWest, which is on from February 13 to 25.

Was it always the plan to act and do comedy? Or did one kind of just happen?

Can you tell me about that decision? I know you’ve said when you moved to L.A., you didn’t have a backup plan.

It was so stressful. And I’m generally an anxious and stressed-out person, so it’s kind of a miracle I even did that. And part of me is like, “What does it say about me that I was able to drop everything and change the course of my life? Am I going to do that again?” [Laughs] Thank god it’s worked out. But I do think it was a good lesson – you can take weird risks that are scary, and even if they don’t work out, life will still find a way.

Your style of comedy is more personal than, say, political. Was it hard getting used to being revealing about yourself on stage?

I’ve always been pretty open, to be honest. I’m not shy, I’m not embarrassed. I’m not going to walk into a party and chat everybody up and tell them my story, but when I have a microphone and there are four Australian tourists who are willing to listen to me at an open mic, I’m down. I’m on stage to share. You’d be surprised by how easy it is to talk to a room full of strangers as opposed to people you know. It’s like night and day.

Why do you think that is?

I have no clue. Like, I can still barely do my act if my friends or family are there. I have a special coming out this year, and I have limited time to prepare for how that’s going to ruin my life [when my family sees it]. I know it’s like, “stranger danger,” but also strangers [are] a safe place [for me].

Let’s talk about Dollface. How did that role come about?

I created and starred in this show called Alone Together, which got cancelled after two seasons. The day that it got cancelled, I opened my email and there was a script for this show called Dollface. Right away, I was intrigued because it’s such a feminine title. Working in comedy can be grind; there are so many guys and it’s kind of a boyish lifestyle. I’m, like, desperate for girl time. Then I read the script and I couldn’t believe how much this character felt like me. I’m usually like, “I don’t know what to do with this.” I felt like I had a chance. I worked really hard on my audition, and it was awesome, and when I finally got the role I couldn’t believe it. I felt like this is [why] I started in comedy – to get a role on a show like this.

Why did you connect with your character, Izzy, so much? I read your dad described her as “another loser desperate to be accepted.”

She’s really insecure and desperate to fit in. And she’s really excited by the female friendships that surround her, but she’s still silly and dorky and gets herself into embarrassing situations but is fine with it.

How would you describe your style? Is it different when you’re performing?

I’ll give credit to my boyfriend, who I think coined this, but my style is “celebrity at the airport.” I love comfy, but just a little bit elevated. It’s like you just got off a six-hour flight from New York to LAX and you’re a little disheveled, but you still have one piece that looks like you spent some money on.

What are some of your favourite brands or pieces?

This is the easiest question to answer, thank you so much. Aritzia sweatpants. I need to buy, like, 100 more, they’re so good. And Madhappy makes a really nice, thicker T-shirt in a boxy cut.

And I know, thanks to your podcast Glowing Up, that you love beauty. What are some of your favourite products?

I feel like every product Kosas makes is actually something I need in my purse at all times. Its Baseline LipFuel is just like a standard lip balm, but it has a really nice flavour to it. I also love their lipstick in Rosewater and the 10-Second Eyeshadow in Globe is so good. I’m all about fast, grab-and-go products.

Nicole Byer Wants Beyoncé to Be a Guest Judge on Nailed It!