Emily VanCamp is a small-town Canadian girl who just happens to be taking over Hollywood. 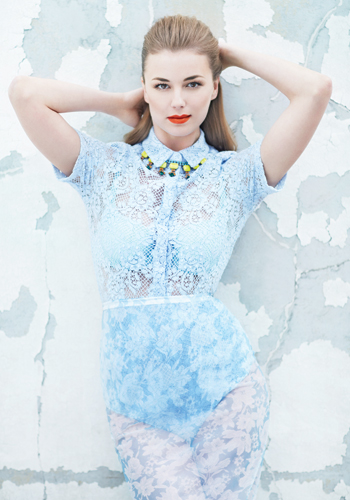 Let’s get one thing straight: Sure, Emily VanCamp is nice, but she’s not the girl next door. I don’t know who lives in your neighbourhood, but girls in mine don’t amble about like urban giraffes, all legs and eyelashes. When we meet at a quiet café in downtown
Los Angeles, the angular knockout chats eagerly with the baker. Apparently this place has the best baguettes in the city. I only notice that he is blushing the colour of a strawberry tart. The 27-year-old Port Perry, Ont., native should be used to the attention.

VanCamp moved to Montreal at age 11 to study ballet and never went home. She fell into acting, was cast as a teen in Everwood and then scored a role on Brothers & Sisters. “You kind of seize the opportunity as it comes to you,” she says with an easy shrug. Now, it seems like the opportunities just keep coming. She dishes out addictive weeknight drama on Revenge and, this month, is taking over the big screen as Agent 13 (the babe who catches Chris Evans’ eye) in the blockbuster Captain America: The Winter Soldier. “I was flipping out,” she says with a laugh. Honestly, I’m just surprised it didn’t happen sooner.

You play such intense characters, but you’re so easygoing. How do you manage?
“I’ve always been very good at letting my characters go at the end of the day. For almost three years now, I’ve been playing with these heightened emotions—someone who’s so much more tortured than I could ever be, with so much more anger than I could ever have. At a certain point, it does start to weigh on you physically and mentally, and suddenly you’re not coping with things as well. I think it’s emotional exhaustion. It’s definitely something I’m trying to catch and change as much as possible when I really feel that it’s getting me down. I started meditating this year, which was hugely helpful. You have to let this all out.”

And you’re dating your Revenge co-star Joshua Bowman, so your personal life must be very intertwined with work.
“Josh and I keep it all very separate. I barely talk about him in interviews, to be honest. It’s just really funny in the moments when we’re playing these absolutely absurd things. I call him ‘wife-beater Daniel.’ It’s hard for my family to watch—it’s also hard for them to see me in that light. But we’re actors. None of that lives in any of us. Thank God!”

How does your family feel about you being in this business?
“They’ve always been so supportive, but we have four girls in my family so they couldn’t up and leave with me. I respect that they encouraged me to
go after my dreams but didn’t necessarily facilitate it. I think you need to learn to take care of yourself. Let’s be honest: People can get kind of weird in this business, so I’m lucky to have my family. They’re no bullshit.”

Your dad is the only boy in that house?
“It’s insane. We did have a cat named Nibbles who was a boy. Nibbles was like the epitome of rags-to-riches. He started out as a feral cat and got into a big fight with a raccoon; he was allowed in the house for a minute, and then he totally weaseled his way into becoming the king of the house. He knew exactly when my little sister would get off the school bus, and he would sit there and wait for her like a dog.”

Was it hard starting your career so young?
“I think I knew I would never go home when I left, which is sort of weird for a child. I loved my hometown, but there was always a part of me that wanted to do these crazy things. I was probably a lot more courageous then than I am now. I was always a bit of an odd child.”

Is it annoying to be described as the girl next door?
“A little bit! I’m nothing like the girl next door. When you think of her, you think of a strong moral compass and a wholesome upbringing, but my life has been anything but conventional or normal. It’s a really odd way to be described by people who don’t really know you. I kind of preferred, as I entered into the Revenge and Captain America realm, the badass thing that people were talking about. Maybe that’s a little more like me.”

Are you adventurous?
“Absolutely. I think I’ve been a massive risk taker. I love adventure, travel and being surprised.”

What has surprised you recently?
“How excited I am to have children! It never seemed tangible, but my sister just had a baby—beautiful little Ivy—and my sister Alison is having a baby boy. Suddenly, it’s like that part of my life is real. I find myself dreaming about it all the time. [Laughs] In your late 20s, you start to realize you can’t call yourself a baby anymore.”

Was there a moment when you realized “Oh, my God, I’ve grown up”?

“All the time! I feel like there’s always a bit of a fight against time. I’m trying to remember to be present and be grateful in the moment.”

“I think that children actually do that for you: There’s a better understanding of life, of time and a better perspective on life in general. [Laughs] I’m just talking about having kids the whole time—this is so awkward!”

What do you do when you have time to yourself?
“What time? [Laughs] For me, the most recharging thing to do is just to be around friends. I’ve managed to find an incredible support system, which is not easy. It took a long time to filter out the good and the bad eggs in this town….”

There are a lot of douchebags.
“Exactly. And a lot of opportunism and people who aren’t who they say they are. That’s an incredibly frustrating thing to discover when you’ve invested in a relationship. I love to just hang out, cook for all my friends, play poker….”

Are you good?
“I’m all right. I wouldn’t say I’ll be joining any tournaments anytime soon.”

Do you have a good poker face?
“I would like to think so—I mean, I’m an actor! Aside from that, I can be a lazy Taurus, to be honest. I love when I tell my mom that I haven’t been working out because she always says ‘But you need to sleep!’ And I’m like, ‘Thanks for allowing me to be lazy, Mom.’ L.A. is annoying sometimes—you constantly feel like you have to be outside. Once in a while, I just like to close the shades, pretend it’s raining, watch a movie and be lazy.”

Are the paparazzi in L.A. annoying?
“It’s the weirdest and most annoying thing. I don’t think actors who are working should ever complain—there are shitty parts, but you deal with it. I grew up in the countryside, though, so I like to go to the grocery store in my sweatpants or maybe even take it to the level of going to the store in my onesie. But I can’t do that anymore. [Laughs] Or, for instance, I stole my sister’s really comfortable sweatpants and took my garbage out in them and was caught by the paparazzi, so I had to give them back!”

Do you have a temper?
“I’m not going to be caught beating someone up, but ever since I was a kid, I’ve had a really strong sense of justice. So, in this case, I feel like my privacy is being taken away from me. It makes me mad, and I think they know it. Maybe someday I’ll lose my temper enough that they’ll be scared of me!”

How do you deal with the pressure to look good?
“I can definitely feel the pressure looming, but I really do try to avoid it because I think there’s a little bit of an addiction that comes with it. I don’t want to spiral down that path. It’s kind of like getting a tattoo—people want more.”

Do you have a tattoo?
“I don’t! Maybe that’s a pattern—I just avoid even entering into the spiral effect. I hope I’ve stayed true to who I want to be as a human being.”

Who do you want to be?
“I have always wanted to live with a strong sense of integrity and try to live this crazy life as fully as possible. [Laughs] I’m getting deep! But I want to be trustworthy, a loyal friend and a giving family member. Everything is so disposable nowadays, including relationships with people, and I really don’t believe in that.”

Now seems like a really good moment for you.
“It feels like that to me too. It’s just a really inspired time. I feel this fuel. It was amazing for me to consistently work for 10 years without ever really being on the radar. That’s very rare in this business, where everyone’s seeking attention. There was a part of me that wasn’t ready for it and was scared. Then, at a certain point, life just said ‘Buckle up, it’s time, go get it. Here’s your reward for taking a risk, here’s your reward for trucking along all these years and working hard on the sidelines.’ It has been so much fun.”