Go ahead and ask this actress about sex: it'll take more than that to make Lizzy Caplan blush. 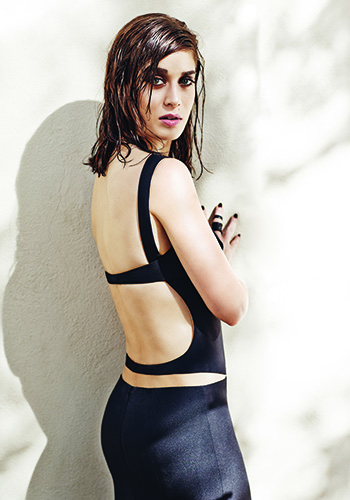 Lizzy Caplan slept through the Emmy nominations. She was sick at the time, burned out after a long filming schedule, and didn’t think her work as Virginia Johnson in the smart TV hit Masters of Sex stood a chance in the hyper-competitive best-actress category. She should have set her alarm.

“It’s just so far outside of the realm of what I thought possible for me,” she says with a grin. We’re sitting in the ochre Los Angeles sunshine. Caplan is eating a giant nectarine and thinking about her career, which has taken off like a firecracker since she signed on to play the famous sex researcher.

“I thought that I’d be a journeywoman actress, and I was pretty content with that. I was making a decent living as an actress, and that felt like enough to me. But, looking back, I was playing kind of the same type of girl over and over again.”

She stops and looks at the nectarine, as though its pit were a crystal ball. “Of course, when I first started, I had much bigger goals. But after doing it for 15 years, I felt the industry was telling me to stick to a certain thing. Only now do I realize that it would not have been a very fulfilling life.”

Cult-favourite characters shaped the L.A.-born actress’ career. Her first role was on Freaks and Geeks at 17 years old, alongside James Franco and Seth Rogen, whom she’s sharing the screen with again this December in the offbeat comedy The Interview. Then later came lovable goth Janis in Mean Girls, which, 10 years later, is still a viable reason to wear pink on Wednesdays. She has scored TV roles on underground fave Party Down and pop hits New Girl and True Blood. But Masters of Sex, which just wrapped its second season, has been indisputably significant.

Despite Caplan’s early success and a decade of “fun and a lot of painful growth,” she was terrified of turning 30. “It felt like if my 20s were—you know those Reebok Pumps? If my 20s were pumping it,” she says, pantomiming a swelling high-top, “then my 30s were like the release button. It was amazing. I’m 32 now, and everything they tell you is true: You just kind of chill out; you become more yourself. It has been a very welcome shift.”

Caplan speaks in such deliberate sentences that it’s hard to think she was once anything but confident. She laughs at the suggestion. “For the majority of my life, I have h been a very, very anxious person. Now I’m just not willing to be anxious about half the shit I used to be.”

There’s not much room for doubt when signing on for a revealing series like Masters of Sex, which lays bare both the actors (in the very literal sense) and the cultural hang-ups we have about sex. Caplan plays secretary turned sex researcher Virginia Johnson, who, alongside Dr. William Masters (played by Michael Sheen) in the 1950s, redefined the way we think about human sexuality.

An avid participant in sex studies, her character spends many sheet-gripping scenes wearing nothing but a heart-rate monitor. (“Only when re-entering the real world do I realize that being naked in front of lots of people is a strange way to spend your day,” she says with a laugh. “I think that, in that vacuum, they probably could convince me to do quite a lot of crazy shit.”)

Caplan is clever and candid about her sexuality in a way that would make those who have shuffled awk­wardly to the bathroom wrapped in a sheet feel rather pitiful.

“I move through the world differently from a lot of my friends,” she starts to explain, before pausing. “I identified with how Virginia could separate sex from love—that was something that made her an odd duck. It’s a lot less harsh these days, but that’s still something that exists…. We have such a long way to go before you don’t see a ‘promiscuous’ girl. I mean, people don’t even use the word promiscuous when describing men, ever.”

She stops and grins. “I don’t think it’s my personal crusade to be this proud promiscuous person, but it’s a conversation that I’ve gotten into quite often since I started the show, and I find it fascinating.”

Kicked back in boyfriend jeans and a tank, Caplan isn’t totally convinced that we’ve moved past the gender stigmas of the buttoned-up 1950s. “It’s a really conscious choice to be, say, the woman who goes out and works while the husband stays at home,” she explains, hands punctuating her thoughts like a conductor. “It’s 2014, and if your husband makes less money than you, people ask you if that’s ‘weird’ for you. It’s pretty mind-blowing.”

For someone who is so open about her body, Caplan is ironically private about her love life. (She was in a relationship with Matthew Perry for several years and admits it can be “shitty dating actors.”) But she has been thinking about exes now that she sees billboards of herself, reclined in bed, dotted around L.A. “I had this moment of ‘Wow, it must really suck for exes to see that.’ But what can you do? Don’t date an actress if you don’t want to see her in bed on a billboard.” She shakes her head. The surrealism of the situation is not lost on her.

ELLE RELATIONSHIP: What happens when you marry a bad boy

Caplan seems to apply sharp reflection to most things, including the concept of marriage. “I don’t want it to be an assumption that I will be the one to stay home and raise the kids,” she says. “Now, I could have kids and want to do that, I have no idea—but from where I sit now, that does not sound all that appealing to me. I really want kids, and I want to be fully involved in their lives, but I don’t want to sacrifice my own goals to be a mother.”

Maybe it has something to do with being raised in California, she suggests, growing up as a tomboy who forced boys to let her play football and pushed them to tackle her. “I actually romanticize the idea of a stay-at-home dad. Partly because I think that’s a very sexy thing, but also because if there are two working actors and both of them get a job and they have a baby, the woman is going to stay with the baby,” she says with a sigh. “I see it all the time. It just seems very unfair.”

While Caplan has made a name for herself playing cynical characters whom she always secretly associated with, she actually seems like quite a romantic at times—though I’m sure she would cringe at the description. She’s wistful when speaking of her close-knit circle of friends. (She is godmother to Busy Philipps’ daughter, and “99 percent” of her actor friends are in comedy.)

“Somehow we’ve built this life raft in a sea of weirdos and very unreliable people,” she says softly. “My relationship with these people is the best thing I’ve built.” Though at the suggestion she tell her friends about the life-raft analogy, because it’s a beautiful thing to say and hear, she pulls a face and deadpans, “Fuck those people.” Caplan, it seems, likes to set up a tender moment just to tear it down.

She speaks about Rogen, her co-star in the upcoming North Korea-based comedy The Interview (yes, it’s a comedy about assassinating a North Korean dictator), with gentle affection before catching herself. “We’re the same age, which is strange because he’s doing so much more cool shit,” she says impassively. “I hate that we’re 32 and he’s directing massive movies.”

But Caplan hasn’t been hurting for projects. She’s still living out of suitcases in the 1956 mid-century-modern house she just bought in L.A. because she hasn’t had time to unpack. “I never understood why you would want to buy a house or a car—the idea of a quick escape appealed to me,” she says, brushing invisible lint off her jeans.

“But now I’m putting down roots, and that’s nourishing me in ways that are surprising. In the past, I would have downplayed it because the idea of beginning to get what I’ve worked for would overwhelm me and I’d have to pooh-pooh it. But now I can safely say that I’m enjoying it in the moment.”

She takes a second to look out over the view. Hollywood’s hills roll out beneath a cloudless sapphire sky. It’s too bright to look without squinting. “Now I really am super-wide-eyed and grateful,” she says, referring to the fact that she used to feel jaded, like some of her characters. “It’s just weird…. It’s nicer being like this, though.”