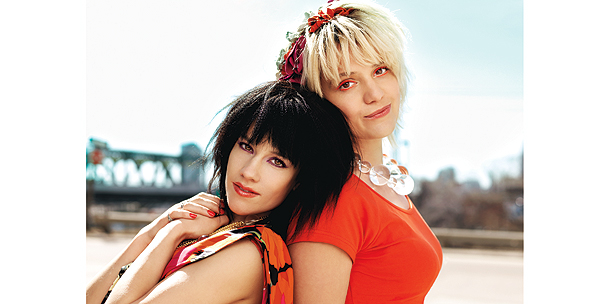 Fan Death is made for girl crushes. The Vancouver-based dark-disco duo’s music is unique and sexy, and its members are beautiful, chic and multi-talented to boot. Both Dandilion Wind Opaine and Marta Jaciubek-McKeever discovered their artistic leanings early. Opaine’s father—a sculptor—began teaching his daughter to draw, sculpt and paint when she was two, while Jaciubek-McKeever spent her early childhood at a music conservatory in her native Poland. When they’re not making music as Fan Death, Jaciubek-McKeever plays with a Polish folk group called e.s.l., and Opaine, a proud art-school dropout, has her own band, called Dandi Wind. The pair met about six years ago after Jaciubek-McKeever attended a Dandi Wind show and developed her own girl crush. “I basically became Dandi’s stalker!” she says, laughing. “I didn’t have any qualms about phoning her up and bugging her until we became pals.” A friendship developed, and, soon enough, they were collaborating on music projects. Their debut album,
Womb of Dreams, is set for release this summer. The music is one part sad robo-disco and one part ominous futuristic synth-pop. “I cringe every time someone says that our stuff is superpop—this is as pop as we’d go!” insists Jaciubek-McKeever.

Learn more about the girls’ style on the next page …

The girls’ style—they share a penchant for catsuits, sequins, elaborate vintage ensembles and space-age silver lamé—is as captivating as their music. “Dressing up and looking a certain part is really fun, and it’s important to have an image that suits the music. It also give me confidence onstage,” explains Opaine. “Dressing up helps me too,” adds Jaciubek-McKeever. “I’m not one to hide.” Rounding out their artistic cred are their popular limited-edition tees, featuring Opaine’s erotic black-and-white photography, and the 200,000-plus YouTube hits for their self-made, dreamy, Sofia Coppola-like music videos. Despite their many talents, the bandmates’ down-to-earth nature keeps them grounded. “Because I’ve been in music for so long, I don’t consider myself ‘an artist,’” says Jaciubek- McKeever. “My Polish grandma instilled a strange sense of duty in me regarding my craft as a musician. It has always felt more like something I was obligated to do because I was lucky enough to have very good musical training and talent, I suppose.”

One-on-one with Kristin Booth
Wardrobe malfunctions: How to fix a fashion mishap