Jazz singer Alex Pangman discusses her latest album and getting her life back. 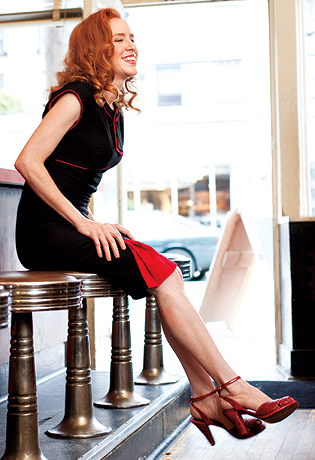 It’s hard not to have a soft spot for Alex Pangman. A delicate redhead with a fiery voice, Canada’s sweetheart of swing has lived more pain than you’d find in any Ella Fitzgerald song. When cystic fibrosis left her bedridden, gasping for ragged breaths, she thought that her jazz career was over. She thought her life was nearly over—before a double-lung transplant in 2008 gave it all back.

“Most girls worry about fine lines when they get to their 30s, but I’m just happy to be here,” says Pangman. That simple affirmation is what brought about her latest album, 33 (Justin Time Records/EMI). It’s a masterful collection of soulful songs that were popular in 1933—and a tribute to reaching her 33rd birthday, which is when she recorded it. “The music from the ’30s buoyed the nation through a pretty bleak decade, and I’ve been through some rough times too,” she says. “I’ve always found that music is cathartic.”

When I meet Pangman for a drink in a lively pub, it’s raining. Not long ago, she wouldn’t have been able to walk the mere two blocks from her downtown Toronto home in that damp air. “My husband and I have been the old couple—him holding my arm and shuffling me up the street with an oxygen tank,” she says. Things have changed. She spent the day shopping with her husband in funky Kensington Market and scarfing tacos before meeting up with me.

While Pangman still doesn’t have full lung function, she has gotten her life—and her voice—back. “It’s like going from riding a tricycle to driving a Ferrari,” she whoops. “It’s remarkable that I’m using borrowed lungs to make music. I’m so excited to have a record that you can put on your stereo and really crank up.”

While not everything from the past is worth hanging on to (she has cooled on vintage dresses after a few ripped onstage when she took a deep breath between beats), Pangman thinks that there will always be a place for soulful music. “I know I’m not really the zeitgeist of right now,” she says. “I don’t subscribe to trends; I just do what lights me up and hope it does the same for others.”

Pangman is now strong enough to hit the road and rock festivals, like this month’s Festival International de Jazz de Montréal. “Being onstage there is the closest I have been to feeling like a rock star. Singing this music is the only thing I know how to do with any sincerity.”