The Toronto-raised actor opens up about his competitive nature, what drew him to acting and his future ambitions. 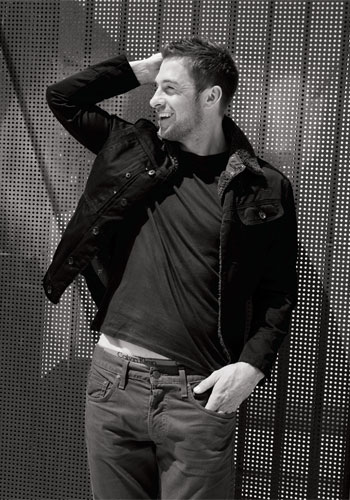 Scott Speedman has been acting for nearly 20 years. Not bad for someone who is only 37. But while a policeman, say, would be sliding into retirement after two decades of service, maybe even practising his golf swing in anticipation, Speedman feels like he’s just getting started.

There has been an arc in the Toronto-raised actor’s career. He started out early in a now-chuckle-worthy episode of Goosebumps with Ryan Gosling. Then he reached oh-my-God-he’s-so-dreamy fame as the hunk in J.J. Abrams’ Felicity. After a stint in the Underworld franchise alongside Kate Beckinsale, he sort of slipped off the big-name roster for a few years. (He was busy dating Heather Graham, among other things.)

This year, though, after a handful of really well-received independent films (like Barney’s Version and Edwin Boyd), Speedman snapped back into public focus with the tearjerker The Vow. Now he’s headlining Global’s Last Resort -a white-knuckle drama set on a submarine from the creative team that dreamed up The Shield.

Ever get claustrophobic while filming?
"Well, it’s not a real sub-one side is a bunch of crew guys eating tacos. [Laughs] It’s pretty intense in different ways. The story is obviously intense itself, but trying to do that kind of show in eight days is also a challenge…. We did a lot of action this week: a lot of running around, a lot of emoting, a lot of brooding."

You play a lot of brooding characters.
[Laughs] "I’m pretty moody myself so the characters probably aren’t; I just bring that to them."

You sound so proud of that.
"I just know who I am. I’m not crabby; my mood is affected by the quality of what’s happening on-set."

That’s fair.
"I get a little uptight if things aren’t going the way I think they should be going. Those are the things I’m pretty intense about."

Does Scott Speedman still identify himself as a Canadian? Find out on the next page…

You’re very invested in this show then, obviously?

"This may sound annoying, but whatever it is, I usually try to make it as good as possible. This show definitely demands a certain amount of work ethic. It’s not something you’re able to just coast through-which often happens in the TV world and is something I’m trying to stay away from."

That’s not annoying. It doesn’t sound pretentious, if that’s what you’re worried about.
"It’s just that when I read actors talking about stuff like that, it’s always a little eye-rolling."

Do you still identify yourself as Canadian?
"I do on some level, but I don’t know if I identify myself as anything, really."

When we spoke last year at TIFF, it seemed that you weren’t into the Hollywood scene.
"Really?"

Well, I’m basing that partly on the fact that I talk to a lot of people in your line of work, so I’ve developed a sense for who’s into fame for fame’s sake.
"I’m into it all in a certain way. But I’ve been blessed, and cursed, with reasonably good taste, which, in a way, keeps my career from progressing-and may have held me back a little bit. I just generally gravitate toward stuff that interests me. But that’s also practical, because I’m terrible at stuff that is manipulative and purely commercial. I have a tough time turning my brain off, to be honest."

It seemed like you were at a crossroads. You said you were in a really competitive age group…. You sounded a little frustrated, honestly.
"When I was younger, I had a chance to make my mark in bigger movies and get myself into a position where I could be a little more picky, but then I went down a different road.

You’re right that it was an interesting time for me, though. I was kind of getting my career together and getting more focused on what kind of career I wanted to have. I spent a lot of time flailing around, not really sure what I wanted to do, in my 20s and early 30s. Then in 2008, I got a movie that turned things around for me: Adoration by Atom Egoyan.

Working with an actual filmmaker got me inspired and on the right track. From then on, things changed for me in a good way."

Discover what kind of career Speedman wants on the next page…

So what kind of career do you want?

"I think it’s as simple as saying yes and wanting to work. I spent a lot of years not jumping in, not getting involved."

In that spirit, what do you do for fun?
"I live in this weird, crazy, amazing house up in the mountains above Honolulu that has these huge grounds and a tennis court built in 1910, so I put a basketball net up there. I just put on my headphones and play basketball for a while, or I’ll go trail running. It’s stress release."

Sounds like you like spending time alone.
"When you’re around 60 to 70 people for 15 hours a day…. I just need to be alone on weekends and decompress."

You were saying that you’re impressed by some of your co-stars, like Andre Braugher.
"I look at the way they attack their lives and have so much going on outside the driven nature of this business-their family lives seem very full and real. That’s something I look up to."

Is a family something you want?
"I’ve got to work on a couple of things in terms of balance before I can bring a child into this life. I wouldn’t feel complete if I didn’t have a family, though."

I saw pics of you biking, smoking pot….
"Those were my younger days. Let’s put it that way. I like riding my bike with my headphones on, and the combination of those three things is not the safest thing in the world."

You shouldn’t wear headphones while riding a bike!
"Well, it’s kind of fun…I don’t do a lot of stupid things, but that’s definitely one of the things I do."

And you used to be a competitive swimmer. Do you ever miss it?
"I miss competing. But when I quit swimming, this immediately took its place."

Acting feels competitive to you?
"It’s not that it’s overtly competitive like swimming, where whoever hits the wall first is the winner, but to do this the way I think is right, you have to really work-it’s the same with athletics. So if this is an art form at all, there is an athletic part that is required."