The Canadian songstress is on top -- again! 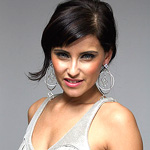 The international success of her third album, Loose, must be sweet vindication for Nelly Furtado, a hard-topigeonhole singer who has flitted between trip-hop, R&B, folk, hip hop, Latin and pop in her colourful career. Furtado has collaborated with artists as diverse as The Roots, Michael Bublé, Caetano Veloso, Chris Martin and Justin Timberlake. She also tends to resist doing whatever is expected of her: for instance, after her poppy debut, Whoa, Nelly!, picked up four Junos and a Grammy, she followed it with Folklore, a less-accessible album of acoustic rock and folk inspired by her Portuguese ancestry.

A change in artistic direction
For Loose, the 28-year-old Victoria, B.C., native decided to go in yet another direction, transforming herself into a sultry, hip-shaking R&B vamp. Furtado went to Miami to collaborate with beat magician Timbaland and spent her days playing on the beach with her daughter, Nevis, and her nights creating sexy R&B-hip-hop songs like the smash hit “Promiscuous.” Still, according to Furtado, the two activities weren’t really as different as night and day — in fact, she credits motherhood with inspiring her to let loose, be spontaneous and shake her thing.

In any case, the response to the new Nelly was immediate and massive. Not just “Promiscuous” but other singles like “Maneater,” “Say It Right” and “All Good Things (Come to an End)” shot up the international charts, making Loose her most successful album yet. Nominations for Grammy, Billboard, Brit, MuchMusic Video and Juno awards followed. Somehow Furtado also found time to kick-start an acting career, guest starring on CSI: NY and One Life to Live . In the meantime, on April 1 she’ll take a break from touring to host the Junos from Saskatoon.

NELLY LETS LOOSE !
ELLE caught up with Nelly Furtado and quizzed her about bad habits, inspirations and fave fashion and jewellery designers.

Bad habits?
“Wandering! I disconnect from the world.”

What do you hate most?
“Hypocrisy.”

What’s the best part of being a mom?
“You learn to enjoy the smallest details in life.”

Fave childhood memory?
“The first time I set foot onstage I was four years old. Ever since then, I’ve loved the reaction I get when I sing.”

Best moment in life?
“When I understood that it’s okay to make mistakes.”

What makes you feel sad?
“Any sadness in others.”

What are you afraid of?
“Big waves, tsunamis and sharks.”

Dolce & Gabbana or Armani?
“That’s so hard! I’ve worn them both, and both of them make me look great!”

Your biggest wish?
“To have more kids and spend more time in the forest. I’d like to act in movies and record records until I’m 80-and get more involved in humanitarian causes.”