No stranger to reality TV, Kelly Osbourne makes a different turn and takes on hosting duties for the UK hit Project Catwalk 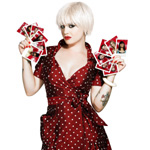 Kelly Osbourne is wrapped in a blanket, wearing sweats and a button down shirt — her hair reminiscent of a sixties bob, red lips and thick eyeliner. The feisty fashionista curls up in a chair and dishes to ELLE Canada about her latest TV endeavor, hosting
Project Catwalk (the UK version of
Project Runway) geared to find the next hot UK fashion designer, and her idea of beauty and style.

"Every show has to have a winner, but for me this is just a great opportunity for 12 young designers to get their name out there and show what they can really do. And with every challenge sadly someone does have to leave until there are the three finalists and they get to do a 20-piece collection. The winner wins a contract to be a designer for a company in London. It’s such a great opportunity for all those designers that were on the show because they have all gone on to great things."

"Elizabeth Hurley was the previous host and I was really nervous because I’m not a model and I’m not a part of the fashion world until I did this show. And I thought, ‘Why would they want me to host it when they could get Kate Moss or another British model?’ It ended really working out and it was really fun, and I loved it. I think they wanted to soften the show up a little bit, target a younger audience. I don’t worry about people not liking me because I see it as I’m not the whole show. I’m a small part, the designers are what the show’s about. "

On bitchiness and cattiness

"There’s so much bitchiness and I love it! The main differences between
Project Runway and
Project Catwalk is most of the time the contestants are drunk and so bitchy. A lot would get jealous, they were always bickering. That’s why I watch it because I see the stuff I missed!"

"The longer the show went on the people who were left I became closest with. I probably had about four favourites. It would be light and fun at the beginning of the day, but then you have to send someone home. Sometimes I’d wind them up and say ‘I know who’s leaving!’ I hated doing the last part. You’re stomping on someone’s dreams and it’s me who’s telling them they have to go home."

"The judges always disagree with each other. Even though I wasn’t a judge, I’d still put my two cents in. The producers would have to come in and work things out, but I believe they always made the right decision. They weren’t too harsh because they’re just giving them a small idea of what it’s really like out there. It’s every man for themselves and they need to realize that."

Check out
Project Catwalk and Kelly Osbourne Monday nights at 10pm ET/PT on the
Slice Network (formerly the Life Network).


Sit front row at all the major Spring fashion shows with our NEW live runway videos. Check out the trends here!

On wearing their designs

"I definitely would! Giles has made me some stuff. I would love to have all of them design for me really. My mom actually took one of the things Giles made for me! He made a jacket and a dress and a skirt, really cool stuff."

On her own line

"I would love to do my own line one day. I can’t say what the style would be because fashion trends change, it’s very fickle. My friend and I have already said we want to start a line and we have a name — The Elimination of Sins Through Style, because we find a lot of people do stuff that we know we shouldn’t and the next day we wake up and think ‘I can’t believe I did that.’ We want to base the first season on uniforms because I uniforms are the coolest things, I loved my school uniform, army uniforms, police uniforms."

On her own perfume

"I can never say never, but you know most of the celebrity perfumes smell like s–t. They are disgusting, and it’s as if they just strap their name on some tacky bottle with toilette water in it. It’s dreadful. A man who worked for the fragrance department at Harrod’s said it takes approximately three to find an appropriate scent, rather than doing what other people do and use a bunch of chemicals. I would want it to really be made of rose petals, real things rather than chemicals. I don’t understand why people do that — it’s just for money. I’m sorry but have you ever smelt a celebrity perfume that has smelt nice?"

"Don’t do it. There is no longevity in being a model. I have a lot of friends that are models and they are the most insecure people I have ever met in my life, because they always get ‘your nose is too big,’ ‘you’re not right for this.’ They get told ‘your big toe on your left foot is longer than the one on your right, you can’t wear these shoes,’ ridiculous things. People look for this ultimate perfection and you will never find it."

"A lot of the time when I am really tired and don’t feel like taking my makeup off and I’m lazy, I use the face and eye cream by Dermalogica, and I rub it on my face and get a towel and wipe it off. It’s the quickest way to get all your makeup off and I love it. I would love to do my own makeup line, but my taste in makeup is quite different and I have such pale skin. I need foundation light enough for me, so I could make one for myself and have a selfish makeup line!"

Find out which celebrities need a fashion makeover!

Check out
Project Catwalk and Kelly Osbourne Monday nights at 10pm ET/PT on the
Slice Network (formerly the Life Network).


Sit front row at all the major Spring fashion shows with our NEW live runway videos. Check out the trends here!