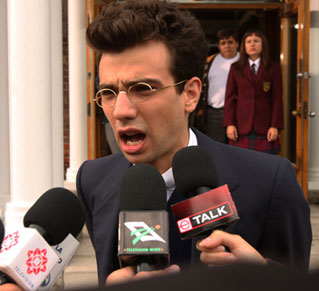 If there is one thing that’s true about Canadian movie fans, we love Jay Baruchel, one of our brightest lights in Hollywood. The 28-year-old actor and screenwriter divides his time between small independent Canadian projects and big budget films like Tropic Thunder, She’s Out of My League, Night at the Museum: Battle of the Smithsonian, Million Dollar Baby and the upcoming The Sorcerer’s Apprentice with Nic Cage.

Baruchel’s passionate about each role he plays; his natural contagious enthusiasm and bubbly positivity shines through the camera lens. He’s likeable, smart, and funny in person, which pretty much describes Leon Bronstein, the high schooler he plays in The Trotsky. Bronstein is a Leon Trotsky nut who believes he is the reincarnation of the Soviet Marxist figure. He rebels against the high school status quo and launches a revolution, with far reaching and hilarious results.

Baruchel says he remembers his own heady teenage years when he became politically aware. “You’re starting to formulate your opinions and you become incredibly impassioned; you’re nothing if not passionate. Then throw puberty into the mix and everything becomes a life or death matter. Really, you can only feel something that strong that first time.” The Trotsky’s hit a nerve with young audiences, says Baruchel. The pinch-me moment came when he observed the teen set watching the film. “It’s pure fun. I really don’t think there has been such a solid, teen high school movie since Heathers that expertly captures the right tone: being neither pandering, nor too cool for school.”

Baruchel pays homage to another young-at-heart fella named Mickey Mouse in his next film, The Sorcerer’s Apprentice with Nic Cage. He brings a mop to life, as Mickey famously did in Fantasia, threw in a few ‘idiot’ pratfalls, but never forgot the hisoric signifance of that cinematic moment. “If someone was going to do a montage of the greatest sequences in film, you’d see the obelisk from 2001 and this scene from The Sorcerer’s Apprentice. I said to myself I can’t blow this.”

That youthful enthusiasm’s about to make Baruchel a big star. He’s currently writing two comedies: Good and Johnny Klutz about a guy who doesn’t feel pain, and a horror film called Pig. He’ll star with his good buddy and fellow Canadian Seth Rogan in Jay and Seth vs the Apocalypse, which he’s executive producing. Talk about striking while the iron is hot!