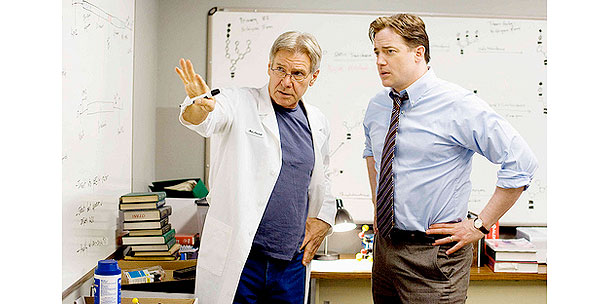 Mention Harrison Ford and we sigh, smile, and get that dreamy, glazed look. He’s that popular, and has been for four decades. Ford has an impressive legacy of films including two of the best-loved franchises in Hollywood history: Star Wars and the Indiana Jones series. But even though he has grown older in a business that champions young blood, he continues to get better. With age comes wisdom and in Ford’s case, this ideology has manifested itself into his most recent project, Extraordinary Measures. Ford executive produced the film based on Geeta Anand’s “The Cure: How a Father Raised $100 Million And Bucked the Medical Establishment In a Quest to Save His Children”, plus countless Wall Street Journal articles, about a man’s race to save his children’s lives by developing a new drug.

Ford stars as the reclusive biotech scientist Dr. Robert Stonehill who gets paired up with, albeit reluctantly, a biotech entrepreneur John Crowley – played by Brendan Fraser. Crowley has two children who suffer from Pompe; a tragic illness with no cure that kills its victims by age nine. “Nobody knows about Pompe”, says Ford during a recent media stop in Toronto. “It affects 400 thousand people in the developed world, so it’s a rare, genetic disease and requires both parents to be carriers. I didn’t know anything about it, but it was the story of a disease, of adversity and man’s ability to rise above that captured me.”

Despite the heavy subject matter, Ford says Extraordinary Measures is meant to be entertaining. “It was not the purpose to suddenly become an advocate for medical research. The ambition was to tell a story of a persistent and effective man who took on great challenges and accomplished great things, and his alliance with an unlikely partner in this adventure. Which would net me a good part to play!”

A good part indeed. Already receiving rave pre-screen reviews, Ford has once again made himself relevant in a very tumultuous Tinseltown. Clearly, retirement isn’t coming anytime soon. “I love to work, I like being useful. I enjoy all of the problem-solving aspects of filmmaking elements. It’s all fun for me, it’s my craft skill. Without it, I sit at home with a box of tools that are getting dull without being used. It’s what I do.”