That lace! Those furs! The "massive vanity." Keira Knightley opens up about the challenges of playing the vain and beautiful Anna Karenina. 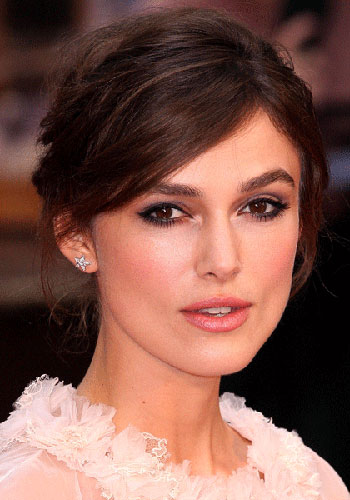 Keira Knightley plays the titular role in Joe Wright’s adaptation of Leo Tolstoy’s classic novel, Anna Karenina, the gorgeous, unstable, aristocratic heroine whose affair leads to her own tragic downfall and marks the beginning of the end of an era in Russian history.

It’s a highly stylized film, rich with stunning period detail, from the theatrical sets to Knightley’s costumes. Knightley tells ELLE Canada that costuming was a crucial part of her characterisation of Anna. In every detail of the wardrobe, there is meaning.

The contrast between the delicate black lace veil over Anna’s face in the beginning when she’s young and hopeful, and at the end, when she’s devastated, is stunning.
Yes, the lace was good one! Jacqueline Durran, a brilliant and lovely woman did it. She invites the actors in to talk for ages and come up with themes. And there was this constant thing with Anna. Her vanity is massive. She is a bird in a cage. We wanted that constant feel of being trapped.

She constantly wore furs and so was always surrounded by death. The only time that we brought colour into the jewellery was this one ruby, so you have the blood and then the lines of the dresses were based on the lines of lingerie so you’re bringing sex and death into it. And the face covered with lace is the cage.

Joe Wright did exciting things with sound too. I’m thinking of the alarming, accelerating beating of the feather fan she uses so furiously.
Yeah, that’s amazing. Again the wings, the idea of the bird in the cage so it was equally that kind of caught bird in the cage. That horrendous thing when they fly into a room and fly against a window we talked about that and that manic thing which it was.

How long did you work on that dizzying ballroom dance scene in full costume?
It wasn’t quick! I want to say it took about two or three days, but it was quite intense with 14 hour shooting days. Everybody got sick, everybody. Aaron, by that last day, was literally running off to puke. He was sick, sick, sick and because we were shooting in winter in England it was cold and we were in a studio and there was no air, and it just went round and round.

But the dances were amazing. We worked with choreographer Sidi Larbi Cherkaoui. Joe saw his work in London and he was inspired by it and what you could do with movement. He created the waltz that would tell the story.

PHOTOS: Winter fashion: How to get the Anna Karenina look

More with Keira Knightley on the next page…

Was it tough doing a role that has been done so many times before?
She’s not somebody that you go "Oh, that’s me" or "I’m in love with her". She’s this strange curiosity and because of that she’s always slightly over there, so it was less frightening than other roles.

In my opinion, it could be completely wrong, but there is am ambiguity about how Tolstoy feels about her. I really thought he hated her, really hated her.

How do you deal with finishing something that was so intense to shoot?
It was quite a relief. We did her death last and that took a week for the bitch to die. It was that awful thing, "My God, it’s a long march to the train station!"

Because the shooting was so stylized, you’re doing several shots for a scene and 14 different takes, and the level of emotion has to be held up for 12 or 14 hours.

It’s not like you can go out afterwards! You go home and you’re in your bed and, Aaarggh! It’s intense, but amazing because of that. We finished three days before Christmas last year and I just lay down for two weeks, like, That’s it, done.

So what’s next?
I got to the end of that and I thought "My God, I need to do something different" So I go to New York and make a movie [Can a Song Save Your Life? with Mark Ruffalo and Hailee Steinfeld] about friendship and making an album and nobody dies and it’s all positive.

Next I’m doing a thriller [Jack Ryan, directed by Kenneth Branagh], and I’m running around in a very Hollywood-y way but I just thought, pure entertainment for a little minute or two is absolutely fine, and then I’ll go back to the other because it’s wonderful. But just a little bit of entertainment for a while. That’s been this year!

Do you ever take rests?
Good question. Actually I didn’t work much for the first half of the year so it’s just the second half that’s going to be intense. With enough coffee it will be fine.