Carrie Anne-Moss has a thing for the strong, silent type in her new "zomedy" thriller, Fido. 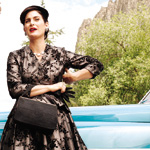 There’s no gentle way to put this, so here goes: in Fido, Carrie-Anne Moss spends most of her scenes crushing on a dead guy. The eponymous zombie (played by British comedian Billy Connolly) is a towering, blue-hued fellow who’s sweet in a low-key, shuffling kind of way — the very strong, very silent type. He may be decomposing, but Fido stirs up something in Moss’ deeply undersexed Helen Robinson; his devotion to her lonely preteen son, Timmy (K’Sun Ray), only sweetens the deal.

So, yes, Fido is a strange little film: a Canadian-produced “zomedy” set in a vivid retro-sitcom realm where the recently deceased (resurrected and turned cannibalistic by radiation à la Night of the Living Dead) have been wrangled into working as servants to the living. “For me,” says Moss over the phone from her home in Los Angeles, “the appeal wasn’t in the zombie stuff; it was in the story, the writing and the characters. There are underlying messages about control and domination. As for the zombie elements…I was kind of like ‘What?’ I’m not a big horror-movie fan.”

A strange film
Fido isn’t quite a horror film, of course. As Moss implies, it’s a social satire that features the occasional disembowelling. The blend of gore and giggles works primarily because the performers — particularly Moss — are game: Helen’s transformation from an uptight June Cleaver clone to a sexy free spirit — which slyly references the soapy housewife-unbound romances of the ’50s — is the 39-year-old actress’ funniest and most tender turn to date. “I saw Helen having an awakening in her spirit,” says Moss of trying to create a threedimensional character within the film’s carefully stylized cartoon world. “My character is stuck in a way of living, and she liberates herself by softening her heart.”

Vulnerability isn’t exactly Moss’ stock in trade: the Vancouver native had her breakthrough in perhaps the decade’s definitive tough-chick part, karate-kicking her way to stardom as Trinity in The Matrix trilogy. “I don’t believe in being typecast,” says Moss when asked if she has ever felt trapped by that iconic role. “If I believed it, it probably would have happened to me. You attract what you make.” Besides, she has nothing but affection for her leather-clad, parkour-pioneering alter ego. “It has been a long time since I played her, and so much has happened in my life since then, but I feel that experience deep in my heart,” she says. “It was the role and movie of a lifetime. I’m very grateful for it — it’s part of my history.” While we may be familiar with her film work, Moss’ personal history is less well known. Aside from a few choice, well-travelled morsels — she harboured dreams of stardom as a child, was named after a hit 1967 song by The Hollies, began modelling at the age of 20 and appeared on several middling television series — Moss has always managed to maintain a certain mystique. Of course, coming out of nowhere (or, at least, from the cast of Models Inc.) to star in a trendsetting sci-fi blockbuster does wonders for one’s allure. Like her good friend Maria Bello, Moss has made a conscious effort to keep her public and private personas separate, leading some to describe her as guarded.

Holding personal life close
Certainly, the decision she made with her husband, actor Steven
Roy, to not publicly disclose the name of their second child (their first son, Owen, is three-and-a-half) suggests a strong desire to hold her personal life close to the vest. Yet Moss rejects the idea that she is creating any sort of mystery.

“Where it gets clear for me about the privacy issue is with my kids because they didn’t choose this kind of life,” she says firmly. “I’m an incredibly open person, though — I’ll tell anyone anything. My husband jokes that I’ll invite people over for dinner and he won’t know who they are or where I met them. But in my work world, I’ve never really been tempted to tell too much of my story.” That said, she seems perfectly happy to discuss her globe-trotting modelling days and the difficult transition into acting that followed.

Fido will be released on March 16.

Check out ELLE Canada’s interview with songstress Norah Jones! A late bloomer
“I decided to move to L.A.,” recalls Moss, “and I remember literally putting my suitcase under my bed and thinking that this is where the suitcase is going to live for a long time, because I had to commit. I quit modelling — I needed the money, but I knew that I couldn’t do both. Modelling asks you to be conscious of your outer self, but with acting you have to let that go. I knew that I couldn’t wear both hats. I struggled financially, I did a lot of television and then I was lucky: I got The Matrix.”

She’s actually quite proud of her late-bloomer status, citing it as a factor in her relaxed outlook. “It’s a dangerous thing to get into it too young,” opines Moss. “I was 30 when I did The Matrix. When you turn 30, your life and your world view change. I remember feeling relieved — it was like I was seeing things in a deeper way.” At the same time, she insists that she has always been grounded. “I remember when I was modelling in Japan, the agency would tell us that some guy wanted to take all the girls out to dinner and I would be the one girl who didn’t go — I didn’t want to go out with a stranger.”

A non-fashionista
One thing that Moss hasn’t retained from her modelling days is a fashionista attitude. “I’m kind of stuck in a slacker, relaxed- wardrobe stage,” she says, laughing. “I wear the same thing every day. I’m always dropping my son off at school or doing pilates, so it feels like I’m always in sweats or yoga pants, which isn’t very flattering or stylish. I’m on the verge of breaking through, though. I have two children, and my second is just over a year old. That first year after a child, I kind of just hunker down at home — I surrender to that side of me. I don’t try to get my body back or be in the world; I go the opposite way. But now that he’s a little older, I’m becoming more interested in fashion again.”

Where Moss has found the time to even flip through a fashion mag is anybody’s guess: Fido is her third film of 2006 (along with fest-circuit fave Snow Cake and the noirish Mini’s First Time) and she just wrapped up Disturbia, a psychological thriller slated for release this spring. It’s a heavy workload but lightened considerably by the presence of family: Fido was shot in Kelowna, B.C., and Moss’ parents, aunts and cousins made it out to the set. “I’m the only one who moved out of Canada,” she says. “You don’t normally get to have time with your family when you work, so it was lovely.” Moss does try her best, though: she brings her kids with her when she’s working, explaining that their presence enhances her performance. “Parenting takes a lot of creativity, and I embrace it fully,” she says. “It goes on for your whole life, of course, but the first three years are the really juicy part — I throw myself into it. I’m lucky that I have a job I love,” she says, sighing, “but when I do it, all my energy goes there. It becomes complicated to do both at the same time, but I think I’m learning.”

Fido will be released on March 16.

Share celebrity gossip with other ELLE Canada readers in our forums!