Academic, star, actress and mother, Natalie Portman, sits down with ELLE Canada to discuss how she does it all. 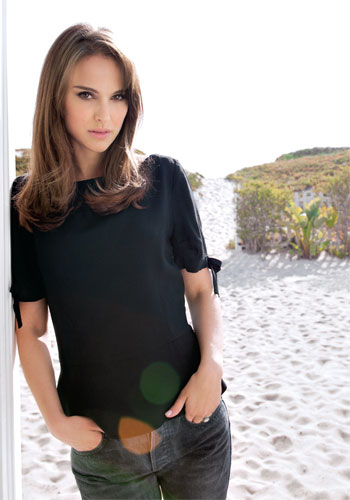 We’re sitting in a darkened auditorium in the House of Dior, which is just off the tree-lined Avenue Montaigne in west Paris. The day is sunny, but the room is windowless and movie-theatre dark. We’re all waiting for Natalie Portman.

After a long delay and an even longer introduction, our first view of Portman is typical of her red-carpet appearances: She strides onto the stage in a full-skirted black gown, all gamine beauty, tiny waist, impossible lace heels and hair pinned up in retro soft curls. She sits stiffly upright on the gently lit stage furnished to look like a ’50s hotel suite, radiating starriness and Hepburn-esque beauty.

She’s here to talk about her work with Free the Children, a charity engaged in empowering children in developed and developing countries. Portman is particularly interested in girls’ education.

"It’s an amazing way to tackle the origin of so many problems in the world," she says, rhyming off statistics on girls’ education like a weathered politician.

Then cut to the following day, in Portman’s suite at the Hôtel Plaza Athénée, where we meet after a wait owing to a "baby emergency." Amid the chatter and bustle, I look up and suddenly the actress is sitting in front of me, having made a considerably-less-assuming entrance than the previous day.

Today she is wearing a simple black blouse and jeans and sipping Diet Coke. She’s still undeniably beautiful, radiating good health, but now she seems approachable and open. "I’m from the Midwest," she says by way of explanation. "We talk to people in the street."

The past few years have brought huge change to Portman’s life. Since her 1994 breakout role in Luc Besson’s Léon: The Professional at the tender age of 13, she has enjoyed a varied and solid career-including some of her major blockbuster successes, like her turn as Queen Amidala in the Star Wars franchise.

But Portman’s role in 2010’s Black Swan as the destructively driven and unstable prima ballerina generated immediate Oscar buzz and flung her together with Benjamin Millepied, the French choreographer who took her through her gruelling paces for the part. The pair announced their engagement shortly before Millepied squired her to the Academy Awards in February 2011, where a heavily pregnant Portman accepted the Best Actress statue.

They married last summer in a high-style vegan extravaganza. So I wonder if finding herself an Oscar winner, a wife and a mother to Aleph in the space of a couple of years has changed her priorities. "I’ve got more patience, definitely," she says. "Just by looking at everyone and realizing that someone’s their mother."

Even journalists? She laughs. "When you’re famous, you put walls up because people want too much from you-strangers get too close," she says. She shrinks into the sofa and puts her arms up as a mock barrier. For a moment she looks uncomfortable and unhappy, but then she brightens again.

Having a baby, she explains, means she’s chatting with people who stop her-in a café, in a store-to ask about her little one, "and it’s nice." Portman has been quoted as saying that now that she’s a mother, she wants to dress "more like a lady."

Today she is tailored and classic, but she’ll admit she still likes "happy clothing," much to her stylist’s chagrin.  "She’s like, ‘Stop dressing like a child!’" she says, laughing.

Off the red carpet, Portman is usually found in skinny jeans and Converse, with her hair pulled into a low-maintenance knot. The bun, she tells me, is because she and her sister are both "blessed" with bushy "Christmas tree" hair.

There’s more laughter as she grimaces and supports an imaginary triangle of hair with her arms. Honestly, it’s pretty difficult to picture. Today her hair is straight and impossibly shiny. She sits with her back ramrod straight, a hangover from the training for Black Swan.

"Though I kind of wore myself out with ballet," she admits. So far, "mommying" has been helping to keep her in shape. (She doesn’t have a live-in nanny; when pressed, she says she thinks "it would be scary to wake up and there is a woman in your room.")

But as an actress, Portman benefits from having a flexible schedule. "I’ve been really lucky in that I can nap when he naps," she says. But, she adds, "like everyone else, I’m scared about what happens when I go back to work."

But go back to work she shall. After taking time out in 2011, Portman is filming back-to-back Terrence Malick projects this year with Cate Blanchett and Christian Bale.

Typical of Malick films, plot details are scarce, and Portman isn’t going to be the one to let anything out of the bag, save to gush that she is his "biggest fan." "Seriously," she says. "
Days of Heaven is maybe my all-time favourite movie."

She’s also reprising her role as Jane Foster in the next instalment of Thor. But have family commitments changed her approach to choosing projects? She shakes her head. "I’m part of a family," she says. "You just plan things all together with everyone’s schedule."

Portman’s friendliness and openness invite camaraderie. And since we’re almost done, I ask her what era she’d like to visit. Her answer is disarming and instantaneous. "Twenties Berlin," she says thoughtfully. Why? For "the literary salons and the nightclubs."

But who would she be? "I’d be like…a dog," she says, and her laugh rings out. It’s this mix of wholesomeness, self-effacing humour and intellect (she has a Harvard degree in neuroscience and the evolution of the mind, though I refrained from asking whether it’s mounted next to her Oscar on the sideboard) that makes Portman an object of interest in a sometimes fatiguing parade of fashionable clones.

In fact, the following day, a photo of her pops up on a news site. She’d been spotted by the French paparazzi as she exited the Plaza Athénée via the service door and jumped into a waiting car. And everything was just as it should be: sneakers and skinny jeans, Christmas-tree hair scraped into a bun, baby in carrier.

Makeup: "Everything has to be easier, faster and healthy-since everything I wear Aleph ends up eating. I wash my face, moisturize and put on some Dior Nude foundation."

Fast glamour: "I put on a dress, which I never do in everyday life, and heels, which I also never do every day, lipstick and Miss Dior perfume and feel glamorous," she says. "But, actually, it’s enough to just not be covered in baby food."