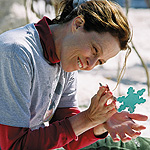 For a self-professed late bloomer, Sigourney Weaver is certainly on a tear these days. In Snow Cake, the 57-year-old actress — who has played everyone from Ripley in the iconic Alien films to Dian Fossey in Gorillas in the Mist to socialite Babe Paley in Infamous — takes on the role of Linda Freeman, an autistic woman who becomes emotionally attached to the man (Alan Rickman) who was involved in her daughter’s accidental death. “This film isn’t slick at all,” says Weaver, looking quite chic in a navy silk-taffeta skirt and pink shirt, her face — untouched by plastic surgery — warm and radiant during our interview at the Toronto International Film Festival. “It’s a very genuine film.”

To prepare for the role of the high-functioning autistic Linda, Weaver spent a year researching autism and even lived with an autistic woman for several days in order to observe her behaviour. “Living with her, I realized that although some of her fears were irrational — such as touching garbage or having a stranger in her kitchen — they were very real to her, and I was able to bring that to the role.”

A liberating role to play
Although her character is unable to do many things, such as take out the garbage, Weaver found her frankness to be liberating. “You know, my mother was English, so I was always very aware of proper comportment, but Linda just says or does what she feels. One of the first things I noticed when I visited the institutions was that autistic people don’t bullshit. If they’re happy or upset, you know it.” Weaver confesses that in her own life, it’s tricky to be so frank. “I’m very shy, and I really hate it when people look at me. It’s the nature of my business that strangers feel a kinship and want to come up to me, but I don’t know them! Sometimes people approach me and ask, ‘I know you probably hate this, but can I take your picture?’ If I answer no, I hear ‘You’re a bitch.’ That is the downside of my profession.”

And, just in case you’re wondering, in the Weaver household it’s the multiple Golden Globe Award-winning actress who’s on garbage duty. “If I didn’t take it out, my husband and daughter would just leave it. Linda’s house is impeccable; I wish that that part of autism was contagious because, you know, my house is chaos — like a tornado hit it.”