Actor/writer/director/activist Sarah Polley shares her thoughts on working in the 'biz. 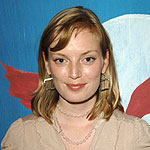 Predicting which titles will be hits at a major film festival is tough business (last year, Elizabethtown limped into Toronto with more hype than Brokeback Mountain — go figure). But this fall, the buzz should be fairly earsplitting for Away From Her, an adaptation of a short story by Alice Munro that marks the feature directorial debut of Sarah Polley.

Interviewed in her native Toronto a week before the film’s completion, the 27-year-old actress downplays the celebrity-director angle. Polley may be familiar to millions from her childhood work as Sara Stanley on Road to Avonlea, but visibility doesn’t necessarily translate to bankability — especially on the other side of the camera. “If anyone thought it was going to be easy for me to get money for a film,” she sighs, “it sure didn’t feel that way. It didn’t feel like I was being given any leg up.”

Hard knocks for celebrity directors too!
“I spent three or four years trying to get another film green-lit,” she explains. “It didn’t work. And then this one did, which is fantastic. But it’s tough. I’m glad that it was hard for me, because I think that it makes you a better filmmaker to have to fight for what you’re doing. I’m glad I got that experience, but it’s a hard thing, and I think it’s harder now than it was 10 years ago. I hope it doesn’t get harder, but I think it will.”

Not that Polley is about to retreat. She says that making Away From Her was a milestone in her young career that she describes as the “most thrilling, nightmarish, fantastic experience” she’s ever had. “Even though I’ve always really enjoyed acting, it was never something I set out to do for myself. As much as I loved it — I think it’s the luckiest, most privileged job in the world — this has a different meaning for me.”

Make your smile camera-ready with the latest in whitening treatments!

Photo courtesy of wireimage.com Polley’s acting career
Even if she were to never appear in another film, Polley’s onscreen legacy would be solid. There aren’t many actresses who can claim to have both worked with award-winning filmmakers from around the globe and starred in a box-office topping action flick about killer zombies (2004’s Toronto-shot Dawn of the Dead.)

Her decision to do the latter had less to do with breaking through in Hollywood than blowing off some steam. “It just looked like a lot of fun,” she says. “Acting for me has always involved a certain amount of pain and agony . . . those are always the kinds of films I’ve ended up in. So [for Dawn of the Dead] I loved the idea of running around and being a kid for the summer. I also got to see what it looks like when you descend into the belly of the beast. It was pretty f—ing interesting.”