From Playboy bunny to a spot on the summer hit film, The Wedding Crasher's, this blonde beauty is hot! 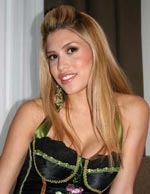 Las Vegas-born actress and model Rachel Sterling is quick on the rise to fame. The 26-year old blond bombshell has hit the entertainment circuit in full force. First there was her role in the hit comedy The Wedding Crashers alongside Vince Vaughn and Owen Wilson, then she takes on the character of Stacy on the popular T.V. show Las Vegas and just recently, she’s added “Playboy bunny” to her list of accolades with her cover on their May 2006 issue.

For Sterling – who started in the business as a lingerie model – all is in a day’s work.

While in Toronto hosting Playboy’s summer swimwear fashion show, we sit down with the star in her suite at the chic boutique Pantages Hotel to discuss her collection of Playboy‘s, how it was to work with Vince Vaughn and why Nicole Richie has the best wardrobe around.

ELLECANADA.COM: Was your recent spread as a “Playboy” centerfold the first time you posed nude?

Rachel Sterling: Yes, it was my first time. But my page is not considered to be a ‘centerfold.’ Centerfolds are always the girl-next-door type. I was a celebrity pictorial.

EC: This is because first and foremost you’re an actress, right?

RS: Right. I’d just finished filming The Wedding Crashers and started working on a new show called Reno 911 when my management company was approached by Playboy to see if there was anyone whom they thought was pretty and might like to be featured in the magazine. Guess model Diora Baird, who is also represented by my management company, was on the cover of Playboy in August 2005. So, when they asked me if I would do it, I said yes.

EC: Did you feel inhibited at all? Was this something you always wanted to do?

RS: Well, when they asked me, right away I was into the idea. Playboy has been around for 53 years, so I know they’re legitimate and reputable. I also happen to have a collection of my own (she smiles) I’m a big fan!

EC: Was your family supportive about you posing for Playboy?

RS: My mom loves it! She was gushing when she saw it, telling me how beautiful I look.

Photo courtesy of Elayne Laken EC: Let’s rewind to before the Playboy shoot. What was it like to work on The Wedding Crashers?

RS: It was very fun and educational for me. It was my first experience not only being part of a movie, but also being involved in the actual vehicle of trying to sell a movie. I never knew how much work went into it until I attended all the press conferences and there were representatives from every major magazine asking questions. It was a great opportunity to learn about the industry and a whirlwind experience!

EC: Do you have any other hidden talents?

RS: I sing, and I also dance. I was classically trained in jazz dancing when I was younger but I was really bad at it! I wore these really thick glasses and I couldn’t see what my instructors were doing. I didn’t know if I was doing the steps right but I thought I was! (giggle).

EC: So you weren’t always a knockout then?

RS: Well, my glasses were huge and made me feel awkward as a kid. But when I think about it now, I’m ok with it. It’s like I saved it (my beauty) for later in life.

EC: Where do you see your career headed in the future?

RS: Right now I’m being cast in a lot of dramatic roles, which is great because I get to diversify my range in acting. Eventually I’d like to direct movies. I’d also like to make my own clothes. I love to sew.

EC: Not just a pretty face!

RS: (Laughs) Yes, I’m also working on a dance-related project called “Sugar Blush Beauties”. It’s a rock n’ roll dance group where we perform to music like The Doors and Ozzy Osbourne and everything in between.

EC: So is dancing how you keep in shape?

RS: Yes! A lot of dancing! I also used to be a Pussycat Doll – not the pop group, but the original Pussycat Dolls dancers.

Photo courtesy of Elayne Laken EC: What is your ultimate beauty tip?

RS: Sleep as much as you can, and drink as much water as you can. I hardly ever go out partying or drinking. That’s definitely not a good regimen for maintaining beauty!

EC: What about make-up?

RS: I hardly ever wear makeup. In fact, when I’m at home, I never do. My mom didn’t let me wear makeup when I was younger so I had a full 18 years of growing up without makeup. I pretty much only wear it for movies, magazine shoots, and events.

EC: So you’re a representative for Playboy’s 2006 summer collection. What do you think about the clothing line?

RS: I love it. It’s very practical and comfortable provided you’re not going to church! There are some really cute skirts, jean jackets, jewelry accessories and purses. I’m very excited to be representing this year’s collection.

EC: Who are your fashion icons?

RS: I’d love to raid Nicole Richie’s closet! She’s the same size as me and she has the best clothes. I love that shabby chic look.