This Canadian starlet gets down to business with her latest comedy series! 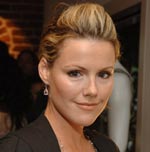 When a film role involves a little time travel, Kathleen Robertson is in her element. In 2001, she starred in Torso: The Evelyn Dick Story, the true saga of a Canadian woman who murdered her husband back in 1946. “I love adopting the mannerisms of different eras,” she says. “I also relished the chance to play
such a nuanced and evil character.”

In her upcoming projects, the 32-year-old Hamilton, Ont.-born actress embodies two very different women. This fall, she stars in the TMN comedy series The Business. As Julia Sullivan, Robertson is a single and hopelessly disorganized woman living in New York City with big dreams of producing films. When a soft-porn producer who aspires to make “real” movies hires her, it seems her prayers have been answered. “They are both trying to reinvent themselves and make this pseudo-art film,” explains Robertson. “But she ends up being surrounded by all this immoral excess, and chaos ensues.”

Robertson’s second project is a supporting role in the big-budget film Hollywoodland, with Ben Affleck and Adrien Brody. It’s the true story of the mysterious 1959 death of actor George Reeves, TV’s first Superman. Robertson plays Carol Van Ronkel, one of the three people in the mansion when Reeves died. “She has a lot of secrets and is very prim and proper,” says Robertson. “Van Ronkel was a small-town girl who went to Hollywood and married a domineering screenwriter 30 years her senior. In a way, she’s a victim.”

While Robertson — who first found fame playing Clare on Beverly Hills, 90210 — now lives in swank Hollywood Hills, she eschews the L.A. scene. She doesn’t lunch at The Ivy or Mr. Chow or shop at Kitson, and she isn’t one of those starlets who strive to have their lives chronicled in US Weekly. “Actors complain about being bothered by the press. So why do they keep going to places where they know the paparazzi are camped out?” she asks. Instead, Robertson prefers to spend time with her husband or take trips back to Hamilton to visit her family. That’s the kind of travel she always has time for.

ELLE is your source for all things celebrity. Check out our profile on Jewel here!