Playing Darwin’s wife in Creation was a natural evolution for Jennifer Connelly. The best part? Her co-star Paul Bettany. 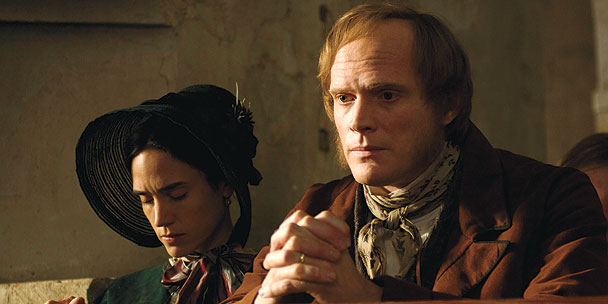 Jennifer Connelly settles into a chair for yet another interview and gently nods that she is ready to begin. Her demeanour is elegant, even regal, in its physical and emotional reserve. Light banter clearly isn’t her forte. Her husband, Paul Bettany, protectively hovers in the background while his wife chats about their latest film,
Creation. The movie, which is the story of natural- ist Charles Darwin and his wife, Emma, had its world premiere at last fall’s Toronto International Film Festival (TIFF). While the movie is ostensibly about the scientist’s groundbreaking magnum opus,
On the Origin of Species, its emotional hook is its exploration of Darwin’s debilitat- ing grief following the death of his daughter Annie.

Emma (played by Connelly) is trying to cope with her husband’s mental breakdown and come to terms with his theory of evolution, which counters her God-fearing view of the world. The film carefully avoids antagonizing either side of the science/religion debate, as does Connelly. “My husband is comfortably vocal about his [atheist] beliefs,” she says. “I reserve the right to keep some things to myself. My role was to portray Emma as best I could. I love that within the framework of this remarkable and incredibly loving marriage, there was this opposition that they had to manage and negotiate.”

Creation — with its focus on love and loss — personally resonated with the 39-year-old actress because it was made shortly after the death of her father and opened at TIFF on the first anniversary of his passing. “We enjoyed ourselves as much as one can on a day like that,” says Bettany, who has now joined the conversa- tion. The pair took some heat for their in-and-out ap- pearance at the party for the film that night, but at the time no one knew the significance of the day for Connelly. “It was my decision to leave the party,” adds Bettany. “I thought it was enough smiling for her. It was a long day, and she’d had no time to think about her- self. First anniversaries are huge. I wanted her to have a little of that back.” Connelly exchanges a knowing glance with her husband and adds: “I went through a really hard time at the end of last year. The biggest thing for me is that my kids grow up safely and have happy lives. For me, that’s enough.”

Connelly and Bettany met on the set of
A Beautiful Mind (2001) and were married in January 2003. Connelly has two boys: 12-year-old Kai, from a rela- tionship with David Dougan, and Stellan, her six-year- old son with Bettany. Although they appeared together in the fantasy film
Inkheart in 2008 and will appear in
American Pastoral in 2011,
Creation was the first time Connelly and Bettany played husband and wife on- screen. “Paul is very easy to work with,” she says, smil- ing. “He does everything I say! He’s a really generous and talented actor. He’s as gracious on-set as he is in life. He’s also funny!” Bettany quickly returns the com- pliment. “I was sort of a figment of Russell Crowe’s imagination in A Beautiful Mind. We were in one scene together and she had to ignore me, which has sort of been our relationship from there on,” he jokes. “It’s tricky for real couples to get together and make a movie, which is sad because she’s really preternaturally gifted. But finally I got to work with her.”

Connelly has been honing her acting skills since she landed her first role at 11 in Sergio Leone’s 1984 gangster film,
Once Upon a Time in America. When she was a young girl, she modelled between films. Connelly says that although she never felt comfortable in that role, she was flattered to appear in the 2008 Balenciaga spring campaign and is honoured to be a Revlon spokesmodel. Besides modelling and acting, Connelly found time to study at Yale and Stanford. In the end, she left academia behind and returned to making movies. In 2000, she became a critical success with her performances in
Requiem for a Dream and
Pollock. Her A-list status was official after she won an Academy Award for best supporting actress in
A Beautiful Mind. Since then, Connelly has appeared in some clunkers (
Dark Water,
Reservation Road and
The Day the Earth Stood Still), but thrown into the mix were such notable films as
Little Children and
Blood Diamond. “Nobody wants to get rid of their life experiences — you are who you are because of them, no matter if they’re good or bad,” she said last year when
He’s Just Not That Into You was released. “But it would be wonderful if those experi- ences weren’t on the shelves of a video club for anyone to see!”

Although it took longer than expected to secure a North American distributor for
Creation, and reviews have been mixed, Connelly says that it will always be an important film for her. “It was a chance to do such an intimate portrayal of love, family and marriage with my husband. I’m very blessed. I have gorgeous, healthy, funny kids and a good husband. My family is the most impor- tant thing to me.”