Pink opens up to Laura deCarufel about music, motherhood and making mistakes. 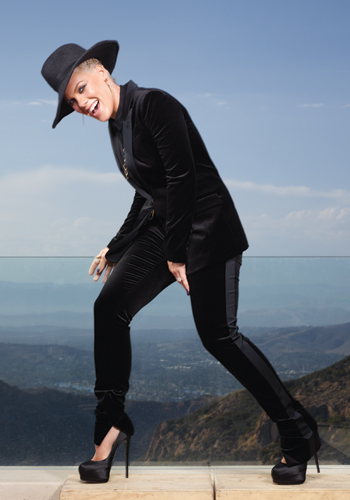 It’s the hottest day of the year in L.A., and we’re shooting Pink at a $45- million Malibu mansion, which is, funnily enough, owned by the inventor of soft earplugs. Marilyn Monroe’s Lincoln sits under a tarp in the driveway, and an infinity pool seems to stretch out to the vineyards below, which are threaded with sparkly aluminum foil to scare off animals.

Pink suddenly appears, barefoot and tanned, in the doorway. “C’mere, cutie,” she says as she reaches for her daughter, Willow Sage, who has just arrived with the nanny. It’s been a little over a year since Pink, 33, gave birth. She nuzzles the child, who is clad in pink pants and a T-shirt emblazoned with boxing gloves and the words “Ready for a fight.” “Mmm, that’s going to keep me going all day,” she purrs.

And it’s going to be a packed one: two back-to-back photo shoots, two interviews and a session with a TV crew, all before dinnertime. Not to mention that Pink’s first single, “Blow Me (One Last Kiss),” from her new album,
The Truth About Love, is already a hit and a world tour will be announced soon. And then there’s the
beauty news. “Guess who’s the new COVERGIRL!!!!!!!!!!!” Pink tweeted when the news broke. The comeback machine is whirring to life.

But the machine can’t contain her. Hours later, after hair, makeup and styling, she’s wearing a jacket by Stella McCartney (“my number one favourite designer in the world”) and braving the heat as the crew cools off with orange Popsicles. As one might expect from a woman who used to tell her record label “I’m not doing it—send me back to McDonald’s” when she felt they were steering her career off-course, Pink is refreshingly, almost shockingly, candid. She has a gaze that fixes and holds you. She’s thoughtful and a little wicked too.

A quick sampling: On the Dior dress that she wore to the Billboard Music Awards in 2000, her self-described most memorable fashion choice: “It was like dollar bills threw up on me.” On giving birth: “I had an emergency C-section.” Pause. “So now I have a smiley-face
vagine”—the last word pronounced with an exaggerated French accent and delivered with a grin. Or her first words about her husband, Carey Hart: “I’m so mad at him right now, actually. I’m going to go home and punch him.” She laughs. “It’s true. But he’s great. He’s
great. He’s an incredible dad.”

Pink and Hart welcomed baby Willow in June of last year, and the singer’s voice changes register when she talks about her. “When you have a child, you realize that you’ve been pretending—you’ve been acting in a play,” she explains huskily. “Everything was tainted or compromised before. Now, before they can talk—or run away—it’s just, wow. Your heart just explodes. I feel stronger—and more vulnerable—than ever before.” She singles out her dad, Jim, a Vietnam vet who played guitar and sang songs in the army, for his “living example of love.” “My whole life, my
dad has never been afraid to let me know that he’s proud,” she says. “That’s a good lesson to pass on.”

Still, she was nervous to start songwriting after Willow’s birth. “I’m like a faucet,” she says. “I turn completely on every time I start to write, whether it’s poetry, journals or songs.” Once she got started, she didn’t stop until she had written all the tracks for
The Truth About Love, her sixth studio album. “It’s the opposite way that
most people talk about love. It’s the psycho version!”

Is it warm and fuzzy? No. It’s searingly honest. In tracks like “Try,” Pink addresses her famously rocky,
on-and-off relationship with Hart: “Ever wonder about what he’s doing / How it all turned to lies / Sometimes I think that it’s better to never ask why.” Does she ever feel that she reveals too much in her songs? “Yeah, and those usually become the singles!”

The new album features guest appearances by Fun.’s lead singer, Nate Ruess, Eminem (“I think he’s the most amazing lyricist. I worked with him on his last record; it was a handshake deal—like, I do you, you do me”) and Lily Allen, now known by her married name, Lily Rose Cooper. “We geek out over music together,” explains Pink. “She’s like the over- the-ocean equivalent of a shit-talker like me.”

Pink’s
no-holds-barred truth-telling is one of the reasons her fans are so passionate. “I don’t really think of it like ‘fan and pop star,’” she says, describing her concerts as being like group therapy. “It feels like a conversation. I share my experiences with them, and they feel they can share their most intimate thoughts with me.” There can be danger with that closeness, though. Pink once left a personal voice mail for a fan who had told her he was going to commit suicide. Instead, he posted the voice mail online. “You have to say ‘That’s just one person. It doesn’t mean I have to shut everyone out,’” she says. “Still, no more voice mails!”

During the shoot, Pink, wearing
Gucci, stands on a block overlooking the Hollywood Hills—a fitting metaphor for conquering L.A., if not the world. She has a family and three Grammys at home, has sold more than 40 million records worldwide and was designated “pop star of the decade” by
Billboard. She’s no longer the moonlighting ingenue interviewing the cast of
Ocean’s 11 for MTV and shyly telling Julia Roberts that she bought her first
pair of thigh-highs after seeing
Pretty Woman.

The next morning, in a British pub in Santa Monica, it’s already hot. A faint breeze flutters the plastic flags ringing the room, which is covered with framed photos of customers like David Hasselhoff and Brooke Shields. Servers slurp tea, joking about their shifts and their hangovers, and Pink’s new single comes on the radio. Right now, it’s innocuous—just background music for the tourists eating jaffa cakes and the busser with the sad eyes. But later, in the car, in the club, in the bedroom, they’ll hear the lyrics and feel that they were written just for them. “I think I’ve finally had enough / I think I maybe think too much / I think this might be it for us.” Imagine the power of giving that “yeah, me too” feeling to people—the grateful release that simultaneously brings you closer to yourself and sets you free. “Music is freedom,” said Pink the day before, eyes serious beneath her smoky shadow. “It’s a world where everyone can win.”

Read more:
ELLE Celebrity interview: Actress Sarah Gadon is one to watch
What would Gwyneth Paltrow do?
Cover girl Cobie Smulders on her big-screen breakout role