ELLE Canada interview: Singer Kelis comes into her own with her latest album

The eclectic singer serves up Food, her hot new album, and a renewed sense of self. 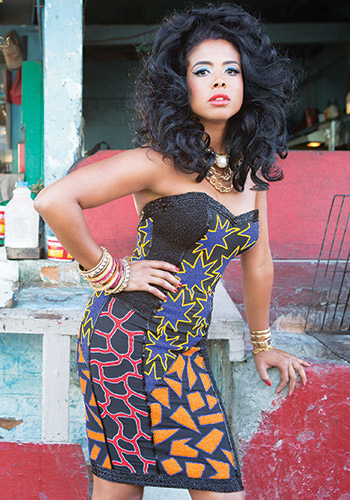 While Kelis’ raw vocals are her undeniable signature, the most surprising voice on her new album is her son’s. “Hi, guys!” welcomes four­ year­ old Knight in his cute lilt. “Are you hungry? My mom made food!” What follows is an album rooted in the ideals of comfort, contentment, creativity and love—all the hallmarks of a home­cooked meal.

Out April 22, Food is the New York native’s sixth album, and it’s clear that she has found a sense of place after the tumult of previous years: her divorce from rapper Nas, the lack of support from labels who wanted to change her (current label Ninja Tune, which she praises, is her fifth) and legal woes. (She was acquitted of charges of disorderly conduct and resisting arrest in 2008.) “I’m in a really good place,” she says now. “I feel resolved and settled; I feel very comfortable in my own skin.”

Creatively, however, Kelis has always been restless, con­stantly reinventing her sound. Witness the leap she took from the eclectic R&B of Kelis Was Here (2006) to the electro­pop of the will.i.am­ produced Flesh Tone (2010). Kelis’ unpredictability is part of her appeal, but on Food, her vulnerability is what’s most striking. The album is grounded in soul, and the genre’s tradition of candour lends itself perfectly because, lyrically, Kelis unburdens her­ self. In “Rumble,” she references her broken marriage: “We got so much history / I hurt you, you hurt me / No, we don’t need therapy… / You got so many issues, but I guess I can top it.”

“I don’t think there’s weakness in acknowledging your circumstance,” she explains. Still, she’s quick to point out that she lives her life on her own terms. When talking about the quiet duet “Bless the Telephone,” a song about serendipitous calls during lonely moments, she asserts: “It’s not so much about loneliness as it is relief. It’s when you can stop for a second and take a deep breath. In my life there’s so much going on: I’m a single mom, I’m putting out an album and I’ve got a sauce line. I don’t even have time for lonely.”

CELEBRITY PROFILE: Taylor Schilling is happy her 20s are behind her

She launched the sauce line, called “Feast,” last year. The singer, it turns out, is also a certified chef, having gradu­ated from Le Cordon Bleu culinary school in 2010. Food is all­ encompassing: It’s a metaphor for her album and her life. “My mom was a chef and had a catering business, so I grew up in that kind of household,” says Kelis. “You couldn’t go to my mom’s house and not have her feed you. Saying you were full was not even an option. I wanted to put a bit of myself into [Feast]. It’s culturally and stylistically consistent with who I am. Food is as me as my music is. It’s a piece of the way I see the world.”