From Toronto to Beverly Hills, Canadian actress Shay Mitchell has bloomed before our eyes. 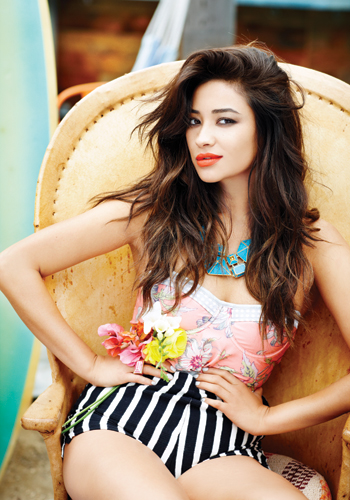 Four years ago, Shay Mitchell was heaving trays of slopping drinks up narrow stairs at a restaurant in Toronto. Today, she’s sitting in the rooftop garden of a posh hotel in Beverly Hills, sipping freshly squeezed pink-grapefruit juice that matches her bright maxidress and talking about a Filipino fan who got “Shay M” tattooed across her arm.

The fact that the 26-year-old actress’ fame happened with whiplash-inducing speed isn’t lost on her. She’s in the midst of filming the fourth season of Pretty Little Liars (PLL), which twists like a knot around four teenage girls trying to solve the mystery of their murdered best friend, but Mitchell talks about life before PLL with the cadence of a seasoned museum tour guide.

Born in Mississauga, Ont., Mitchell moved to a leafy green neighbourhood in Vancouver with her parents and younger brother when she was 10. She noticed she didn’t look like any of her friends, though. “When I was in high school, I was so uncomfortable with myself,” she says, brushing her long, thick hair out of her face. “All my friends were blond and blueeyed. My mom is Filipino—but my friends’ nannies were Filipino.” So she dyed her hair blond and armed herself with watercolour-hued contact lenses in blue, green and grey. But getting scouted to model in Bangkok and Hong Kong at age 18 changed the way she felt about her exotic features. “I was getting cast because I didn’t look like anyone else,” she says now, with a laugh. “I moved out to Bangkok pretty much alone; I had to find my way and get on a motorbike to go to castings.” She landed back in Toronto a year later because she wanted to pursue acting. She got an agent, but she found herself alone in a lonely city— again. Mitchell shakes her head as she remembers one long Friday night. She Googled “wine bars” and then took the subway downtown from her small apartment to sit alone on a bustling King Street patio and watch people pulsing down the street with their friends like schools of fish.

Celebrity fun: Our favourite STARS AND THEIR ZODIAC SIGNS

But in 2009, after a few bit parts and modelling jobs, her agent sent her the script for the pilot episode of Pretty Little Liars. When she got called to test in Los Angeles, she was ecstatic. The studio had prepaid for lunch on her economy flight and she felt “so fancy.” The wake-up-call recording at the hotel said “Good morning; today is your day to become a star.” And that’s exactly what happened: She booked the show two days later. “I just remember screaming,” she says. “Everybody at the hotel must have thought I was getting murdered. On the flight home, I was walking to my seat in the back and the flight attendant checked my ticket and was like ‘Oh, no, you’re in first class.’ I’d never sat there before—it was surreal.”

When they started filming the show in L.A., her friend from Toronto sent her a picture of the subway station Mitchell had walked through every day to get to her waitressing job. It was lined with Pretty Little Liars posters. She cried. Now she has fans—“Mitchies,” as they’re formally referred to—around the world. “‘Passionate’ is the word I like to use,” she says about Mitchies. I’d say “frenzied.” The encounters seem so frequent that the other cast members—Lucy Hale, Troian Bellisario and Spring Breakers star Ashley Benson—tease her about it. When Mitchell was on vacation with a friend in the Aran Islands in Ireland last year (combined population of 1,200), girls started crying and circling in cars as soon as they noticed her waiting for the ferry. (“It’s nice to know there are a couple of places in Ireland where I can crash.”) At a signing in New Jersey, one young girl showed off her tattoo: a quote from one of Mitchell’s interviews sloping down the back of the girl’s calf, complete with “Shay Mitchell” as attribution underneath it. And that’s not the same fan tattoo she mentioned earlier. “Growing up, I don’t know if I really had those kinds of feelings about stars—maybe for Jonathan Taylor Thomas,” she says with a laugh. “So when they start to cry, it’s hard.” These girls—the ones who sleep overnight in Times Square so they can confess eating disorders or depression during signings—are likely stirred by Emily, Mitchell’s character on the show. Trustworthy and vulnerable, she came out as a lesbian and tries to live her complicated life as honestly as she can. “She would be the one on the show I would go to if I had a problem,” says Mitchell.

Celebrity interview: EMMA STONE on beauty and her career

They might also confide in Mitchell because she likes the idea of being a role model. She has a lifestyle website and blog where she tries to connect and share with fans. (And, yes, she’s totally inspired by Gwyneth Paltrow.) “Even on social media, I like to post uplifting quotes because what else would I be doing? Just taking pictures of myself?” she asks. “Although I do that too,” she adds with a laugh. Keeping up with the million-plus followers she has on Twitter, Instagram and God knows what else is demanding. “There’s always that fine line: Am I putting myself out there too much? Am I living my life through my phone?”

Mitchell actually misses the days when her dad would ban phones from the dinner table. When success hit, some friends—and we all know these kinds of friends—started asking her to tweet about them or “like” their photos. “I even went on a date and the guy was like ‘Can you tweet about my new EP?’ Like, really?” she says, twisting her grandmother’s diamond ring, which she wears on her left ring finger.

She’s surprisingly pragmatic about the pressures of living in Beverly Hills. “This isn’t the real world,” she says flatly. “The real world is out there. You want to see it? Go travel.” She’s still shaken from the reality she witnessed in Thailand, the Philippines and Cambodia. She has been several times: first to model and then to work with the Somaly Mam Foundation, a non-profit group that fights sex trafficking. “Sexual exploitation was everywhere, and it really had an impact on me,” she explains. “When I came back from working with the girls, it was hard for me to talk to people. When the TV came on and it was Real Housewives of whatever the hell, I was just like ‘Shut it off.’ Overhearing people’s vapid conversations was hard. I needed to be by myself.” She promised herself then that she would make a change. “To be honest with you, my biggest dream is not to win an Oscar. For me, it’s to open up a Somaly Mam centre in the Philippines in the next few years.”

That’s a far cry from the goal her acting teacher suggested when she was first trying to break into the industry. “We all presented a monologue,” she says, already laughing. “I was so nervous, but I did it. Then the teacher was like ‘Sweetie, you don’t need to go about it this route. You can be in L.A. sitting shotgun in some guy’s Ferrari.’”

Mitchell was pissed. Her parents had taught her that the best trophies are the ones you earn yourself. “Living here,” she says, sweeping her hand across the L.A. skyline, “that attitude is a curse and a blessing. A lot of guys I meet are like ‘I can’t do anything for you—you have a house and a car.’ And I’m like ‘Good to know you’re insecure. Thanks for letting me know.’”

Though she talks openly about the pitfalls of dating (“I want to find a partner, but I’m already complete— despite what the love songs say”), Mitchell is an obvious romantic. She rhapsodizes about moving to Italy to live an Under the Tuscan Sun-style existence and dreams about falling for a National Geographic photographer so they can travel the world together.

Before then, though, she’d like to kick some ass. Wait, what? “I love action movies so much,” she says breathlessly. “I would love to do the Bond or Mission Impossible franchise. I love that the characters are strong women who can wear a dress and high heels. And I can run really fast in heels!” She can also skydive, climb a rope, complete a muddy obstacle course and scale a rock wall. “I’m very competitive,” she says with a shrug, looking down at the little infinity symbol that’s tattooed on her wrist.

It’s Mitchell’s self-awareness that makes her so interesting. “I’ve met some of the world’s most beautiful people—actors, singers,” she says with a smile. “Sometimes I’m impressed, but sometimes I’m not because their personality sucks or they aren’t who everybody thinks they are.”

I’ve often felt that way too. But as I sit here in the sun with Mitchell, it’s easy to think that maybe everyone in Hollywood is as open and warm as you’d like to think they are.