Rufus Wainwright's new album is as poetic and as glam as ever. 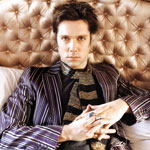 If you’re impressed — as you no doubt will be — by the depth, breadth and maturity of Rufus Wainwright’s fifth album, Release the Stars (Geffen Records/Universal Music Canada), you have no less a figure than Judy Garland to thank. It seems that Wainwright’s audacious recreation of the tragic diva’s legendary 1961 Carnegie Hall concert had some unforeseen effects on his own music. “I think that splashing myself with pizzazz and being involved in a project that was so unapologetically popular gave me room to be more esoteric in my own work,” he says. “It was a way to exorcise the tap dancing demon in me, then go into the studio and totally focus on the music.”

And yet Release the Stars’ seductive tunes and poignant romanticism make it anything but esoteric. It contains lovely little piano ballads and grand orchestral epics — sometimes in the same song — but it’s not nearly as over-the-top as previous Wainwright extravaganzas, like Want One and Want Two.

“Initially, I was intent on this being a pared-down, intimate, bare-bones album,” he says. “But I was a fool to think that my natural propensity for glamour and drama wouldn’t take over. And it did, but that intimate mindset reappeared here and there. I think it made the big moments bigger and the small moments smaller, so it became a much wider experience.”

Wainwright wades into the holy wars with characteristic bravado in “Going to a Town,” which specifically criticizes religious fundamentalism in the United States. “I don’t think it’s a hateful song,” he says. “I use harsh language, but it’s actually kind of a love song — a mournful acknowledgement of a relationship gone south. We live in a time when action is the only option. There’s no more room for contemplation. Whether it’s the environment or the war or politics, we have to do something.”

Apparently, Wainwright — the bad boy child of Kate McGarrigle and Loudon Wainwright III — who has sung openly about his battling family, his sexuality and his former crystal-meth addiction, is now grappling with something like maturity. “This album is the product of someone who has been given the opportunity to make mistakes, overcome issues, be incomprehensible and then come around,” he explains. “It’s rare to be allowed to grow like that, so I feel fortunate.”

Check out ELLE’s list of the top 10 sexy men!