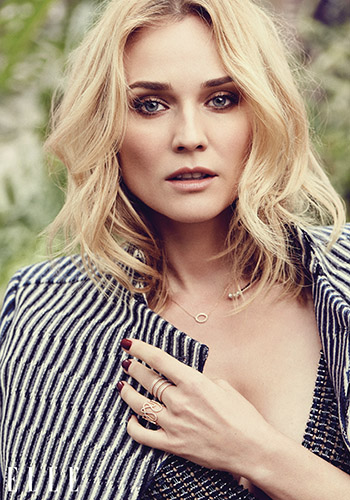 In a simple oversized grey sweater, relaxed navy culottes and ballet flats, Diane Kruger quietly arrives at Dawnridge, design icon Tony Duquette’s over-the-top 1949 Hollywood Hills home and the site of our September-issue cover shoot. Kruger’s well-known reserve is especially apparent today. As carpets are being laid down, boxes are being unpacked and a tech crew specializing in virtual-reality video set up their sci-fi-looking cameras, the 39-year-old actress is the calm in this fashion-and-tech storm.
But perhaps this quiet focus explains how the German-born actress has been able to make 34 films (in both English and French) in only 13 years. Her preference for taking on characters with complex inner worlds (Lily Sometimes, Farewell, My Queen, The Better Angels) is telling, but what Kruger seems most interested in is staying real.
Case in point: When I chat with the actress over the phone a few weeks later, she has just arrived home from Cannes (a.k.a. one of the most glamorous events on the planet) but would much rather talk about the new house she has just bought with her long-time boyfriend, Canadian actor Joshua Jackson.
Between running errands in L.A. (she spent the morning picking out a washer and dryer), Kruger tells me about her upcoming roles, the freedom that fashion has given her and why choosing to become an actress is still the best thing she has ever done.

You’ve been living in L.A. for five years now, but are there still times when you feel especially German? “Oh, all the time! I feel more German when I’m here than when I’m in Germany. My work ethic alone feels very different. I fill my days with lists of things I need to do. My friends always say ‘You’re the most German person I’ve ever met!’ But in Germany, I feel more French. I’m always like, ‘I’ll come when I come, maybe I’ll be home,’ which drives my family nuts.”

Let’s talk about that work ethic. You started modelling when you were 15 and worked for Chanel, Saint Laurent and Armani, and since becoming an actress in your mid-20s, you’ve been in 34 films. Do you sometimes feel like you barely have a chance to catch your breath? “I think this year has been unusually busy for me, and I’m not sure why. But I have to take a break now—I’ve been away from home for six months, and that’s not good. I have to stop and actually live life. I feel like I’m becoming stupid and silly; you live in this bubble when you are on-set—you don’t get to live real life.”

You’ve said that in the past as well—that you’re not interested in living in Hollywood’s bubble. Do you think this comes from growing up in a small town [Algermissen]? “You don’t forget where you come from. I come from the countryside and a very typical middle-class background. I really look up to my mother; she raised my brother and me alone. She’s the one who instilled such a strong work ethic in me.”

Did your childhood influence the roles you’ve chosen to play? [Kruger grew up watching her father struggle with alcoholism before her parents finally divorced when she was 13; she then moved to Paris on her own at 16 to model.] “I think my role choices have been more inspired by my time in France. I was exposed to a lot of art and culture, and French cinema is really the reason I wanted to become an actress. One of my favourite actresses is Romy Schneider; I discovered her work when I moved to Paris. I am still inspired by French film; Michael Haneke’s Amour is my favourite movie of the past 10 years. In Europe, the stories—especially for women—are so much more interesting than in the United States.”

But you’ve played some pretty interesting characters in North America, like Sonya Cross, the detective struggling with Asperger syndrome on FX’s The Bridge. “I think television has always been great for women, but with movies, we still have a ways to go. Maybe I don’t have the same opportunities that other actresses have here, but I think it’s such a rarity to find really good female- centred films.”

In the upcoming French film Disorder, you play a trophy wife dealing with the bodyguard her husband hired to protect her and their son while he is away. What attracted you to this character? “Well, when you first meet her, she seems very cold. But as the weekend goes on, that facade slowly crumbles. I thought it was really interesting to take that journey with the character—this idea that you believe someone to be a certain way, only to discover she is quite different.”

You also have Sky with Lena Dunham coming out in 2016, and it has already been generating a lot of buzz. “I co-produced Sky with one of my best friends, director Fabienne Berthaud. She’s very near and dear to my heart. I’ve known her since I was 16—she gave me my first job, so we have this really intense relationship! It’s a story about a couple who travels to the United States on holiday to save their marriage, and it doesn’t go so well. I love the way it looks at relationships and the self-discovery that happens when you are forced to go through a certain set of circumstances.”

Both of those films seem fitting—your Instagram bio says that you love peculiar people! Do you consider yourself a peculiar person? [Laughs] “No! I actually find myself quite boring, so I’m always drawn to people who are unafraid of being peculiar and strange. A lot of my friends are very, very funny, bizarre people—and I’m forever attracted to that.”

Are there any people in particular who you just love for their strangeness, and have they inspired you to be a little strange? “Well, in general, actors are pretty weird! In one of my first movies [The Piano Player], I worked with Dennis Hopper; I could listen to his stories forever. The way he lived his life in the ’60s and ’70s was just so extreme. I always admire people who are unafraid to go to extremes. I don’t know if I have the courage to do that. But these people, they’d rather die than not live, you know?”

People like that have such a strong sense of self, but I think you do as well—I can see that even in your personal style. Would you agree? “I would agree, but I really think that that comes from working in the fashion industry for a long time. When you work in fashion, you learn not to be afraid of it. I don’t really care what anyone thinks, so it takes away the anxiety of thinking ‘Oh, my God, what is everyone going to say?’ Women in Hollywood are constantly being judged by what they wear, which is very silly, so there is this fear that you always have to wear the glitter see-through princess gown or you’re going to get hammered!”

You still have ties to the fashion world—you’re the face of Hugo Boss and Chanel—so it’s interesting that you’ve chosen not to work with a stylist. “When I first started out, I had the whole thing, because when you first move to L.A., that’s what you think you should do. So you get the stylist and the makeup artist and the hairstylist and the publicist. But I didn’t recognize myself in those early pictures because I ended up looking like everyone else. And there were just too many people around all the time, so I decided to cut some people out. And since I have a lot of long-standing relationships with designers, it just became easier for me to call them myself. And they’ve all been nice enough to make things for me or send things from the runway that I like.”

So I have to bring up that Tim Blanks interview you did a few years ago, when you called him an ass for suggesting that your looks might stand in the way of people taking you seriously— “Mm hmm.”

Well, I love how adamant you were that an actress should never be judged based on her looks. Do you still encounter this type of thinking? “It just gets a h bit boring. Yes, I read fashion magazines and, yes, I enjoy fashion, but I didn’t become an actress to talk about clothes.”

And yet people talk about your style all the time, and the general consensus is how perfect it is. So often I’ve heard people say “Oh, Diane Kruger is perfect.” “I don’t know if people really say that about me. It’s impossible to go after perfection—it doesn’t exist.”

Perhaps people are confusing perfection with restraint. You don’t seem to share a lot of yourself with the public. “I don’t know. I’m on Instagram and I am sharing a certain version of myself that I want to share with people.”

I noticed on Instagram that you share a lot of in­spirational quotes about love, confidence and never giving up. “Do I? It’s so immediate; most of the time I just see things that I like and repost. I don’t know; I don’t think about it quite that hard.”

Do you feel any pressure to share more? So many actresses share so much of their private lives with the public nowadays. “I don’t feel the pressure, no. But I think that has a lot to do with how I grew up. Germans are naturally a little more reserved. But, at the same time, I don’t have anything to hide. I don’t know the people on social media, so I wouldn’t share everything that goes on in my life with them anyway.”

So why did you want to become an actress? What are you hoping to convey to people who watch your films? “I try to make it a reflection of real life. What I enjoy most about a performance is that you can identify with the emotions and the people being portrayed. There are beautiful people who can act, and there are unattractive people who become so beautiful when you watch them because you empathize with them fully. To me, that is the beauty of acting—it’s a reflection of what it is to be a human being.”

It sounds like you’re also deeply interested in story­telling. “I think it started a little bit more unconsciously but kind of egotistically. [Laughs] I mean, to become an actress, you have to be quite narcissistic—it’s all about ‘Here I am, please watch me!’ I started as a dancer, and without knowing it I was able to express these really confusing emotions I had as a kid through dance—and be rewarded for it when I performed onstage. I had a very tumultuous upbringing, and I didn’t realize how lucky I was to get everything out through dance. I feel like I’ve been searching for that my entire life—to connect with a medium that makes me connect.”

You’ve said that you left modelling because acting allowed you to show your vulnerabilities and doubts. After 13 years, does it still fulfill you in the same way? “You personally just gain so much as an actress. You feel. You live those emotions, and that can be very extreme. But, if you allow yourself, you can go on a personal journey as well. It can be unsettling, but it becomes a high you crave.”

Watch the cover shoot in 3D: Coinciding with the release, our Virtual Reality Cover Film will be available to download on September 9 in the app store via Samsung Gear VR and Google Cardboard. Check back here for updates!