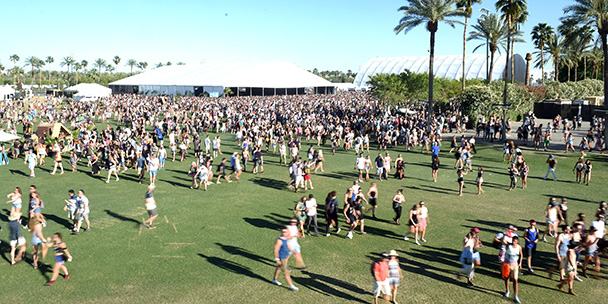 Truth time: As the World’s Least Likely Person To Attend A Music Festival (my soul is 97 and happy to be it), my first day of Coachella was a major learning curve. There was noise. A lot of it. ALL the people. And dust, so, so, so much dust. But I lived to tell the tale (comin’ atcha day 2), and more than that, ended my night dancing it away to Ellie Goulding with all the wild abandon of a youth…my actual age.

Here are three pro tips I learned the hard way yesterday, so that when you hit Coachella you don’t make them too:

1) Bandanas are your new best friend

If you’ve seen any pictures of Coachella, you’ll probably have noted that an awful lot of people are walking around with scraps of fabric tied across their faces. This is not a fashion statement: It’s a survival strategy. Even when the wind isn’t kicking up like it did last night, the festival grounds are mad dusty, and if you don’t want to wake up the next morning with grit between your teeht and the sediment equivalent of a smoker’s cough, you’ll tie one on too. That will not, however, save you from accumulating a fine layer of sand all over your body. Just think of it as Mother Nature’s microdermabrasion and roll with it.

2) You will see celebs. You just might not register it until three hours later.

In the space of about half an hour, I was in the presence of Mad Men’s Jessica Pare, Twilight’s Taylor Lautner, Paris Hilton, Tommy Lee Jones and Jayden Smith…but I only recognised Jayden because we literally locked eyes outside the VIP bathrooms. The other two I completely spaced on until I talked to people who were there at the same time and they were all like, ‘Did you see Jessica and Taylor?!’. The thing about Coachella is that it’s such a low key crowd (and honestly, everyone is more focussed on the music and taking Instagrams of the ‘Besame Mucho’ sign) that celebrities just sort of blend in. Which is good! They’re as entitled to head-band to M83 with impunity as the rest of us. (But if anyone sees Leo you need to text me ASAP, ok?)

3) Between 5 and 7 truly are the golden hours

If you want to feel ‘super Coachella’, these are the two hours to do it: You’ll walk across a field of happy, relaxed people in the golden glow of an about-to -set California sun, the sky a little hazy from the kicked-up dust, you’ll be feeling all pleasantly sun-kissed, and this means that literally any picture you take from any direction (whether it’s of the iconic ferris wheel, any of the art installations, or just a selfie of you in a bandana) will be an instant social media worthy masterpiece.

13 items you need for the ultimate Coachella wardrobe