Candid. Political. Hilarious. Genuine. A surprising but definitive voice of a generation. This is Chrissy Teigen. 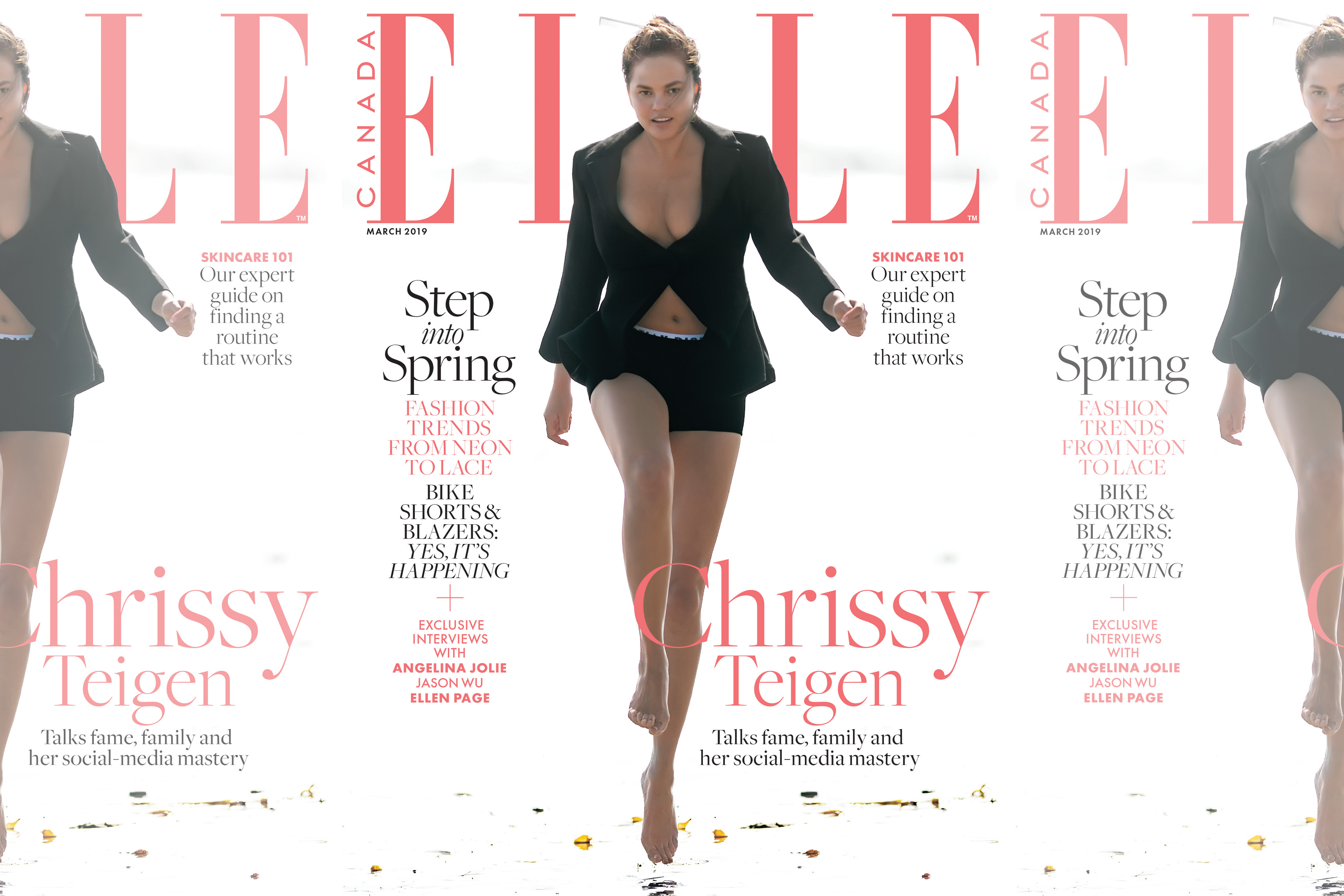 It’s lunchtime in Los Angeles, and Chrissy Teigen—a.k.a. @chrissyteigen, the internet’s funniest (and frankest) person—and I are sitting in the sunny garden restaurant of the Hotel Bel-Air. It’s her choice—she once lived at the hotel for two months while her home was being renovated, so the waitress knows her well—and we’re drinking vodka-sodas because, as Teigen puts it, “it’s nearly Friday, right?” (It’s Tuesday.) On the agenda: the pros and cons of a life lived out on social media. Faced with too much Insta-perfection, she argues, “people get FOMO, or they feel bad about their bodies, and I get it. If I feel bad seeing certain things, what about that girl who has no connection to this industry? It makes me sad because that’s not really how it is.”

So Teigen speaks truth to online fakery, posting pictures of her stretch marks, say, alongside the comment “whatevs,” while making us laugh out loud with her hilarious takes on every­thing from politics to parenting. Like the time she spoke for all of us in response to Kanye West’s political Twitter posts last year when she tweeted, “kanyeeeeeeeeeeeeee iljeflaejsf’pifgaiw’rgjwregfreogjwrpogjjr.” Or the moment someone tried to shame her for going to dinner 10 days after her daughter was born, asking, “How’s baby Luna?” She replied, “I dunno. I can’t find her.” Or when Donald Trump tweeted that it was time to “keep ‘evil’ out of our country,” she replied, “What time should we call your Uber?” The U.S. president—not known for his thick skin—later blocked her after she tweeted “Lolllllll no one likes you” at him. “I would have blocked me too,” she laughs. “I was doing this way before he was president. I just despise him. It’s like he’s on the wrong side of every issue. That takes talent. Even a broken clock is right twice, yes?”

This is why people love her. More than 30 million people, at the last count: 22 million on Instagram and almost 11 million on Twitter. At 33, she is also a successful model and TV host (of Lip Sync Battle), not to mention, along with singer John Legend, one-half of Hollywood’s most likeable couple. But it’s her online feeds that have won her a place in our hearts. She’s funny, outspoken and painfully honest. And, most of all, she’s real. She makes social media a better place to be—and that relationship runs both ways. The internet, says Teigen, has changed her life. “Guys have always come up to me since I did Sports Illustrated,” she says. “But now, they all say the same thing: ‘My girlfriend loves you.’ And I couldn’t be happier.”

If Teigen seems particularly gifted at navigating the online world, perhaps it’s because she’s been doing it for a while. Born in Utah to a Norwegian dad, Ron, who was an electrician, and a Thai mom, Vilailuck (you’ll have seen her on Teigen’s Instagram Stories), growing up she loved posting on online message boards and was an early MySpace fan. More niche was her love of Neopets, a noughties game where users took care of virtual animals. (She even ran a Web forum for it.) Her love of the internet may have had something to do with the fact that the family was constantly moving for her father’s work. They moved about 10 times, each different place meaning a new school, a new circle of friends: “I’m great at wriggling into a new group of people, but I don’t get attached easily, so it’s good and bad.”

She was discovered as a model at age 18 while working at a surf shop in Huntington Beach, Calif., but it took Teigen two years to book a job. “It was boring stuff, catalogues,” she says. “I was a mannequin, really.” Gradually, she began building a commercial career, booking campaigns for major brands such as Nike and appearing on the cover of Sports Illustrated. Now she’s signed to IMG, which also looks after the likes of Karlie Kloss and the Hadids.

Maybe because she had to graft to get there, Teigen has never hesitated to pull back the veil on her industry. I ask about the stretch-marks post. “Everyone Photoshops them out,” she exclaims. “It’s insane. And I don’t want anyone to feel like they’re the only ones. I was on a Victoria’s Secret shoot, and it was a big turning point for me to see those women with scars and stretch marks and bruises. Who’s to say it’s even a flaw?” She believes things are changing for the better: “Fashion is definitely kinder to women now. Some brands cater to a lot of different body types, so it’s obvious now who supports women and who doesn’t.” And it isn’t just fashion—it’s across the board. “I’ve never seen women have more fight in them than now,” she says. “We’re ready to stir the pot and bring issues to light.”

It was through modelling that she met Legend. It was 2007, and she got a call to star in one of Legend’s music videos—“Stereo,” by director Nabil Elderkin, who had shot her for a Billabong campaign. “We just clicked,” she shrugs. “It wasn’t like ‘He’s so sexy!’ But he did make the first move, for sure.” She saw him play at the famous Roxy Theatre afterwards. It was, let’s say, a good night. You’ve probably seen the tweet: “Every time someone asks John for a selfie and he says, ‘I never do this,’ I think back to the night we met when I said it, but not about selfies.” She chips in now: “We spent 12 hours together, so that’s like 12 dates, right?” Still, “it was never like ‘This is the man I’m going to marry.’ There are also those normal stories where you date and talk and just grow together,” says Teigen. She was just getting out of a relationship at the time and sleeping on friends’ couches. “I do remember talking to him on the phone the next day for hours, though. He was on tour. And I’d never do that now.” (She hates talking on the phone; it gives her anxiety.)

Their engagement was also very “normal.” He proposed during a Christmas trip to the Maldives in 2011. “I had the worst cramps!” she says. “He has videos of me complaining so hard. But then the waiter came with this silver dome and all this arugula falls out and there’s a ring box. There was no grand speech, but, yeah, I cried.” She finds the fuss over proposals comical: “The speech and everything that goes into it. It’s absurd! And I was very happy the way we were. The annoying part was everybody else saying ‘Has he proposed yet?’ They never believe that you don’t care or that a woman might be thinking about a career path. So when he asked, I had no idea.” They married in Lake Como in 2013. (Scroll her Instagram for the dresses, three in total, all Vera Wang.) Now, they—with their two children, Luna, three in April, and Miles, one in May—live in Rihanna’s old house, a glorious mid-century modern in the exclusive Trousdale neighbourhood of Beverly Hills, with 360-degree views of the sea, city and canyon. In the early days, they’d go out bowling together. “We got really into it,” she says. “I got him a ball with his face on it.” Now, with the kids, it’s all about trips to the aquarium and science museums. “I’m big into kid attractions. No more day drinking,” she says with a wink.

Starting a family wasn’t easy. Teigen has spok­en about the process of going through IVF—and about how, when it didn’t work the first time, she blamed herself. But she’d do it again in a heartbeat. She wants four kids, she thinks. “I loved being pregnant,” she says. “I think it was mostly the eating binges, though. John used to make this sandwich and leave it for me at midnight. I’d literally just grab it in the night and eat in the dark. Miles was, like, 4.5 pounds and I gained 60 pounds. I had a good time!”

Most days she’s up at 7 a.m. to answer emails—a full hour after Legend, who’s usually in their home gym by 6 a.m. “He can’t work out while I’m awake because I’ll stop him,” she says. “I’m just bitter. Seeing your husband get fit while you’ve got your post-baby body, I’m like, ‘Fuck you, take a day off!’” Occasionally, she’ll drag herself to her trainer at Body by Simone, but she goes to feel good, not lose weight. “Since I was 17, I’ve known my weight in the morning, after lunch and at night. And, trust me, those numbers were wildly different then! But I wasn’t as happy.”

The reason her relationship with Legend works, she says, is because they’re so different: “He’s quieter than me, which isn’t saying much. But he’s more thoughtful, whereas I’m spur of the moment. I can’t hide things very well. If I feel it, you’ll see it on my face, but he’s better at covering. I was never that big into music. Still to this day, I’m very Top 40. And I’m more emotion-based than him. I can see everybody’s side of an argument.” It’s worth noting that his Twitter bio begins with “Chrissy’s husband.”

With her online presence, TV show, modelling career and line of cookbooks (her second, Cravings: Hungry for More, was published in September), a powerful force is taking shape: Brand Teigen. Are there plans for an empire like Gwyneth Paltrow’s? “Oh, no,” she says. “I have no idea what I’m doing next week, let alone next year. I don’t plan things, honestly. I never had any set goals. What motivated me was seeing other people do stuff. Like, ‘Wow, she has a cookbook and she’s not a chef, so I can have a cookbook now?’ That’s how my confidence grew.”

Her criticisms of Trump have made her the subject of bizarre conspiracy theories. “They look at my costumes on Lip Sync Battle or how we dress Luna for Halloween and say we’re sending secret messages. When I Snapchatted that I had a security threat on my card so they closed it, they were like, ‘Donald Trump shut down her card.’” If you can be sure of one thing, it’s that Teigen won’t let the trolls silence her. “It’s not like I don’t want to ruffle feathers,” she says. “If it’s something we really believe in, such as the tented camps [Trump’s child-separation policy], then I’ll talk about it.” And she has found a community online. “I have relationships with people I’ve never met but have talked to on Twitter for, like, six years. To me, that’s a friend.” That’s the thing about Teigen: She’s not just real, honest and funny; she’s warm and approachable. She makes the internet a happier place. Long live Brand Teigen.