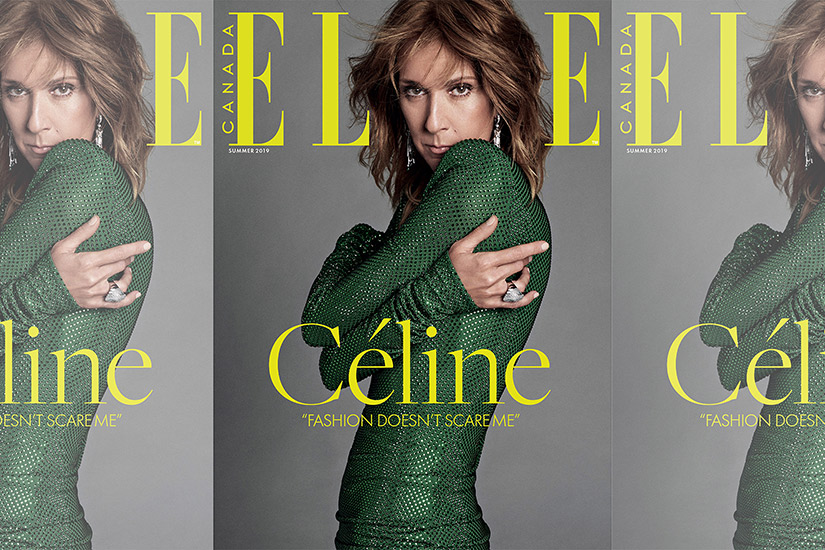 Las Vegas is always a scene, but this Saturday night is turning out to be more of a spectacle than usual. The strip echoes with an ear-splitting cacophony of car horns, dance music and the dulcet tones of hollering, high-fiving college students on spring break. And though the sun set an hour or so ago, sunglasses wouldn’t be a bad idea to help shield one’s eyes from the glare of all the flashing lights.

Amid this mayhem, just outside Caesars Palace, a visible-from-outer-space-size poster of Céline Dion onstage holds court, overlooking the teeming crowd waiting to enter the show. She is in full entertainer mode, with her head thrown back in ecstasy or elation—or both.

Inside the massive building, a few flights of stairs lead down to a nondescript grey hallway that funnels through the basement of the hotel’s theatre. Down here is where you’ll find Dion’s dressing room—and a quiet, well-appointed area for the lucky few VIPs and invited guests who will meet the icon before the show. There are about 20 of us waiting tonight, including a group of women from Dion’s native Quebec dressed to the nines and barely containing themselves; the concrete walls practically vibrate with anticipation. Suddenly, a door swings open and she is standing there in a blinding-gold pantsuit, with a wide smile and open arms, ready to delay the already-late start of the show with enthusiastic conversation, hugs and multiple photo ops. When we’re introduced, I confess that I can’t wait to be subsumed in the heightened emotions that a Céline Dion show delivers. Dion looks me deep in the eyes and says, in that unmistakable voice of hers, “Oh, yes, we will feel all of the feelings tonight!” Then, under the bright pot lights of the waiting area, she thumps her chest with her fist and raises it to the sky. The show, it seems, has already begun.

If ever there was a natural performer, it is Céline Marie Claudette Dion. Onstage and in conversation, she bristles with electricity. She cracks sarcastic jokes. She vamps. She struts. She knows what her audience wants, and she doesn’t hesitate to deliver: For the past two decades, this has come in the form of two Las Vegas residencies and world tours totalling nearly 1,500 shows. Though she took a hiatus as her husband of 22 years, René Angélil, battled cancer, to which he succumbed in early 2016, Dion returned in full force later that year. Onstage, she sparkled as brightly as ever, but offstage, she emerged with a new and more fearless embrace of self-expression through fashion. Thanks to a remarkable collaboration with “image architect” stylist Law Roach, she quickly became seen as a second-act style icon, one who wore Vetements sweatshirts and head-to-toe Balmain at Paris Couture Week and dance-posed her way out of five-star hotels in ensembles so editorial in nature they’d not been seen outside the pages of magazines.

“Nothing is too much for me,” she says when we meet again the next day in a palatial suite at the Wynn hotel, where she is officially debuted as the new face of L’Oréal Paris. She’s wearing an edgy-yet-elegant draped grey Alberta Ferretti suit with Gucci shoes. Her eyes are heavily lined in black, and her hair is almost as golden as the gilded outfit she wore the night before. I ask her how she became so comfortable taking fashion risks. In response, she shrugs and gestures with her hands, which I soon learn is a common response. Dion is a diva in constant motion, like if a hummingbird had the poise of a panther. “I have nothing to lose,” she says of her clothing choices. “I get into my character; it’s art. You can’t please everybody. Fashion doesn’t scare me—it excites me and transforms me.” Then she belts out the hook from Bonnie Raitt’s classic “Something to Talk About.” In fact, Dion is so moved by clothing that she often asks to keep the samples sent to her by designers for events. “I don’t steal them!” she clarifies; rather, she asks to buy the items. Brands can’t always give up their one-and-only runway sample, unfortunately. “They offer to make me a copy of the sample,” she says, but she usually declines. She only wants the original—the very piece she was wearing when she fell in love with it.

Dion is also a one-of-a-kind. At 51, she is still as passionate and animated in concert as a windup toy as she runs through her incredible repertoire of hits, from “The Power of Love” to “Because You Loved Me.” She alternately jumps, kicks, punches the air and orates to extremes. While introducing her song “Ashes,” from the film Deadpool 2, she describes her reaction when she was contacted by Ryan Reynolds. It’s a lengthy diatribe that includes miming her preparation for the role she imagined he wanted her to fill before then demonstrating her reaction when she realized it had all been for nothing—he only wanted her to sing. Dion’s band and backup singers, an elite group of professionals, wait patiently as she shares stories with the audience, actively listening and chuckling at her sidebars. Her voice—the rich vocal power that catapulted her to fame as a teen and has since made her the biggest-selling female musician in history—is still worth the wait. By the time she starts singing “I’m Alive,” the crowd, whom she already had in the palm of her hand, has dissolved. The woman standing beside me is crying, and I’m hoarse from whooping involuntarily every time she nails a high note. (And she hits them all flawlessly.) Throughout the auditorium, people (who are possibly buzzed from the Beauty and the Beast cocktails being sold in the theatre lobby) can’t seem to resist yelling “I love you!” during any moment of silence in the performance. The connection between Dion and the audience is unquestionable. Unlike other entertainers, Dion has never tried to hide her feelings behind the pomp of celebrity. She operates with the same fervour as her fans, which has made her the target of mean-girl mockery. She hollers with delight during runway shows and kisses designers, and when Roberta Flack’s “First Time Ever I Saw Your Face” opened at the spring 2019 Valentino couture show, she wept in her front-row seat. In recent years, the openness that always connected her so closely to her dedicated fans has finally found broader appeal—it’s suddenly cool to care.

That Dion is living more unapologetically than ever is likely one of the reasons L’Oréal Paris came calling. “It’s a miracle—an incredible honour,” she says, shaking her head in amazement. “Feeling beautiful means feeling strong, and feeling strong makes you succeed. I never thought that at 51 years old, I would become an ambassador.” In fact, her youth was plagued by insecurity. She had bad teeth, she explains, and was too skinny. Dion’s diminutive size is once again a topic of conversation in the media. In person, she is not delicate or frail. She carries her long body like an athlete or a ballerina—probably because she spends hours training in the ballet studio. “I think that ballet is so romantic, dramatic and sensual—it’s like a dream,” she explains, adding that if she could have been anyone, it would have been ballerina Sylvie Guillem. “And ballet is so hard; I don’t want to do something easy.”

But after years of speculation and critique, Dion is tired of talking about her weight. “People say ‘She’s a little thinner,’” she mimics with frustration. “But I’m working hard!”

It’s true: Four times a week, after a marathon two-hour stage show, Dion trains at the barre with Naomi Stikeman, one of her former dancers, and does improv with her “bestie” Pepe Muñoz, who is a dancer and an illustrator and also now part of her styling team. (Her favourite move, by the way, is the inelegantly named “Le fish,” a classical movement during which the dancer is held low to the ground by her partner.) Dion is straightforward when I ask her how she’s able to find the stamina to hit the dance floor after headlining a Vegas show. “My job is to train my voice, and I need to sleep and be with my kids,” explains the mother of three: René-Charles, 18, and twins Eddy and Nelson, 8. “So the only way we could do it is after the show.”

She has only recently started pushing herself to explore beyond her main priorities of motherhood and music. “Throughout my career, people have asked me, ‘What do you do for yourself?’ but, to be honest with you, I didn’t quite understand,” she says with a laugh. “I was like, ‘Don’t you think I have enough on my agenda?’ I wanted to say ‘When I have five minutes, I go to bed! Or have coffee! I don’t do paint by numbers.’”

Though she has carved out time to hone a hobby, her schedule shows no signs of abating. After her residency at Caesars comes to an end in June, she will drop an album, due out this fall, and embark on a massive tour to match. “This whole career has been so crazy,” she explains, perhaps unnecessarily since her 26 studio albums have resulted in nearly 250 million records sold and she changed the face of Vegas itself by repopularizing the idea of a residency and transforming the gambling capital into the entertainment mecca it is today. “I never had the chance to think about becoming a singer—I didn’t have time: I was five years old, singing on the kitchen table for my brothers and sisters. Then, I sang in the square with my brother playing piano while my mom watched from the window of the restaurant where she cooked and people started to call and ask ‘Is the little girl singing this weekend?’” Dion goes on to list the landmarks on her journey to becoming the Queen of Pop: writing her first song with her mom at 12, learning English and world tour after world tour that landed her in a custom-built Colosseum dreamed up by Franco Dragone, who has created shows for Cirque du Soleil.

“Today, I have three kids, I’m 51 and now they want to talk beauty [contracts]?” She laughs and throws up her hands sarcastically. “I don’t know what’s going on! Next time, can you think about it just a little earlier?” It’s the perfect time, I argue. “I actually think you’re right,” she acquiesces. “Because in my 20s and 30s, I was discovering myself. People were deciding things [for me] and I just wanted to sing. Now? I’m strong—steady.” Before I can respond, she’s belting out the opening to Soul II Soul’s late-’80s smash “Back to Life”: “Steady are you re-eady? / What’s going oooon?” For the umpteenth time since entering Dion’s melodic bubble, I get goosebumps. We talk more about her soon-to-be life on the road (“Home is where the heart is, but the blood in my veins is still from Canada,” she insists), if we’ll ever see her walking a runway show (FYI, designers: She is ready) and how at her age she is nonplussed by critics. (“I wear what I like because you can’t please everyone. You don’t like it? Check it out tomorrow. Maybe you’ll like that one better!”)

Tomorrow, Dion is back onstage—her true home. There will be fireworks and thrills and all the sparkle Vegas has to offer. And there will be dancing. “I follow the drum to my own heartbeat, so just keep your eyes open and the lights on and follow me, baby!”