Which one do you most want to emulate on your big day? 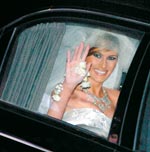 Swag Bride
When the rich and famous get hitched, they’re showered with freebies and discounts. PR mavens call it product placement-the rest of us call it bad taste. “There are only three things that should not be commercialized,” says etiquette doyenne Letitia Baldridge. “When you are born, when you get married and when you die.”

Melania Knauss
In a surprising break with tradition, Donald Trump’s third bride revealed her Dior wedding gown on the cover of Vogue a week before the big day. The magazine’s fashion pasha, Andre Leon Talley, helped Knauss select the Galliano-designed pearl- and rhinestone-encrusted confection, worth an estimated US$200,000, in Paris. Vogue then ran a 14-page feature, shot by Mario Testino, on the boondoggle. (A double-page ad for Donald Trump The Fragrance coincidentally ran in the same issue.) Ten days after the ceremony, the 50-pound gown was suspended from scaffolding and lowered over the Slovenian model for an InStyle Celebrity Weddings cover shoot — taking care not to snag it on her half-price US$1.5-million emerald-cut D-flawless diamond engagement ring.

Star Jones
Zaftig host of The View, Star Jones married Wall Street banker Al Reynolds a year to the day they first met. Her white silk taffeta Reem Acra gown featured a 27-foot train, and her tulle veil-embroidered with Swarovski crystals and seed pearls-was topped with a 19th-century 100-carat diamond choker borrowed from Fred Leighton. An expert in celebrity graft, the Payless spokesperson managed to get “complimentary” tuxedos, invitations and bridesmaids gowns — she even had an official airline for the wedding weekend (Continental). Reprimanded by producers for trying to promote suppliers on the show, Jones’ wedding website thanked more than 30 corporate sponsors. Guest gift bags included Fendi sunglasses, Victoria’s Secret lingerie, a Harlequin romance, a Nintendo Gameboy console-and a slimline copy of the Bible.

Princess Bride
“Marriage is a wonderful institution,” joked Groucho Marx, “but who wants to live in an institution?” Certainly not Princess Diana, who blamed her bulimia on the frigid air of the British royal household. They may get to wear the crown jewels, but — as Princess Grace warned Lady Diana Spencer in the run-up to her wedding — the life of a princess is no fairy tale.

Princess Grace
Oscar-winning actress Grace Kelly met Prince Rainier III at the Cannes Film Festival in May 1955 and — in a unique May-December twist — was engaged by year-end. Princess Grace was strongly encouraged to give up her acting career to sire heirs for the Monegasque throne — a move she later regretted, feeling lonely and trapped in her gilded cage. In return for breaking her seven-year contract, she let MGM film the “wedding of the century” for movie release in America, and the lavish event in April 1956 attracted some 30 million viewers. Grace Kelly’s gown — a wedding gift from MGM Studios — was created by head costume designer Helen Rose from 450 yards of Brussels rose-point lace and silk taffeta. Her veil was embroidered with pearls and orange blossoms.

Princess Diana
Rumour has it that when Prince Charles was instructed by his mater to take a bride, his former girlfriend Camilla Parker Bowles recommended Lady Diana Spencer. Her suitable lineage and blemish-free past made the 19-year-old virgin a catch — or pawn — in the eyes of the British royal family. In 1981, Lady Diana wed Prince Charles in front of 3,500 guests and an estimated one billion TV viewers. Her ivory silk gown with 25-foot long train — designed by David and Elizabeth Emanuel — was decorated with 10,000 pearls and sequins, and her silk slippers had heels of hand-painted gold. Diana wore the Spencer family diamond tiara and a sapphire and pearl choker, a wedding gift from her husband-to-be. Fifteen years later — after admitting infidelity on both sides — the couple divorced. The following year, Princess Diana died in a car accident in Paris, the paparazzi in full pursuit. Prince Charles and his long-standing mistress Camilla Parker Bowles finally tied the knot in April 2005.

Britney Spears
“Not so innocent” Britney married childhood friend Jason Allen Alexander at the Little White Chapel in 2004. Wearing ripped jeans and a baseball cap, Britney was escorted down the aisle by a hotel employee at 5:30 a.m. (Apparently neither bride nor groom was drunk at the time.) “We were just looking at each other and said, ‘Let’s do something wild. Let’s get married, just for the hell of it,’” the groom told Access Hollywood. Britney admitted she didn’t realize the ceremony was legally binding and did it to upset her parents. The marriage was annulled 55 hours later. Britney, 23, married backup dancer Kevin Federline at a surprise wedding last year.

Joanne Woodward
When actress Joanne Woodward first met Paul Newman in 1952, she thought he was “too pretty for words-I hated him on sight.” He was also married. Six years later they tied the knot at the El Rancho Hotel. Their enduring marriage proves that some Vegas weddings really do stick. Repeatedly asked for the secret to his long and happy relationship, Newman says, “When you have been together this long, sometimes you drive each other nuts, but underneath that is some core of affection and respect.” Woodward has her own view: “Sexiness wears thin after a while and beauty fades, but to be married to a man who makes you laugh every day, ah, now that’s a real treat.”

Cindy Crawford
When supermodel Cindy Crawford wed Rande Gerber in the Bahamas, they booked up the entire 70-room Ocean Club resort, spending some US$160,000 on the weekend nuptials. For the beach ceremony, Cindy wore a white Galliano slip dress, and Rande wore a white shirt and Armani trousers. Both went barefoot. This was the second time round for Cindy. Her first — to Richard Gere — was in Vegas, when they made wedding bands out of tinfoil. The union lasted four years, ending soon after the couple took out an ad in the London Times saying: “We are heterosexual and monogamous and take our commitment to each other very seriously.”

Pamela Anderson
This Vancouver Island-born actress first met Mötley Crüe drummer Tommy Lee at a New Year’s Eve party in 1994. (He came up and licked her face. Yum). After much mewling, he managed to get a date, only to have it cancelled because she had a photo shoot in Cancún. He followed her to the beach and, after four days of partying, they married. Pamela wore a white thong bikini, and Tommy wore shorts. Back in L.A., they had wedding rings tattooed on their fingers (Pamela’s says “Tommy’s”; Tommy’s says “Pamela’s”). The couple divorced in 1996. They remarried a month later, only to divorce again in 1998.

Photography courtesy of Splash News/Keystone PressChild Bride
“It’s not the men in my life that count, it’s the life in my men,” quipped Mae West-which could be why 42-year-old actress Demi Moore is squiring web-toed Ashton Kutcher, 26, around town. Up until now, it’s mainly men who marry much younger women, an extreme case being 52-year-old Rolling Stone Bill Wyman, who wed Lolita Mandy Smith, 19, after six years of courtship.

Celine Dion
When Québécois songbird Celine Dion was 12, her brother sent her demo tape to fledgling producer René Angélil, 38. Over the years, Angélil became Dion’s Svengali, building her career and even transforming her Swan-style. When Dion was 25 — after five years of secrecy — she came clean to her fans. “I wrote a note behind my album,” Dion said to CNN’s Larry King. “René is my love, I can’t keep this secret inside of me anymore.” Her publicist, Mia Dumont, had carte blanche to plan the 1994 Montréal wedding. “I said to her, ‘What do you want?’ And she said, ‘I want something I’ll remember all my life.’” Dion had 532 guests, a 17-car motorcade, a hand-pearled dress with 20-foot train and a seven-pound crystal tiara.

Mia Farrow
After Frank Sinatra married Mia Farrow, his former wife Ava Gardner said, “I always knew he’d end up in bed with a boy.” Linked with some of the world’s most beautiful women — Marlene Dietrich, Lauren Bacall, Lana Turner and Marilyn Monroe — the 50-year-old crooner shocked fans and friends when he hooked up with 20-year-old Farrow. Even fellow Rat Packer Dean Martin got the claws out: “I’ve got Scotch older than Mia Farrow,” he crowed. Two years later, in 1968, Sinatra served Farrow divorce papers in front of her fellow cast and crew members on the set of Rosemary’s Baby.

Freaky Bride
Pandered to by hangers-on, the rich and famous find it hard to stay grounded. Which may be how Zsa Zsa Gabor whipped through nine husbands. (“I want a man who is kind and understanding. Is that too much to ask of a millionaire?”)

Priscilla Presley
U.S. Air Force brat Priscilla Beaulieu was just 14 when she met the hip-swivelling rock ‘n’ roll star Elvis Presley in Germany. They dated for four months until he was shipped back to the States. Two years later, the 26-year-old Presley talked Priscilla’s father into sending her to Graceland. Elvis’ control-freak tendencies emerged as he forced Priscilla to dye her light-brown hair black, like his own, and made her wear heavy Elvira-like makeup and false lashes. In 1967, the couple married in Vegas. After their divorce five years later, Priscilla blamed the breakup on Elvis’ stardom and addiction to prescription drugs.

Liza Minnelli
At Liza Minnelli’s splashy 2002 New York wedding to producer David Gest, best man Michael Jackson carried the blushing bride’s train. Bridesmaid and gossip columnist Cindy Adams dubbed it “the night of a thousand facelifts” before adding that Gest, 48, and Minnelli, 56, had left “no VIP unturned. If they could get Mae West from the grave, they’d pick her up and stuff her and sit her in the third row.” Following rumours that Gest batted for the other team, Liza claimed their marriage was truly sexual. “He’s a real tiger in the sack,” she said. Just 16 months later, Minnelli and Gest separated, with Gest suing Minnelli for US$10 million for neurological damage and headaches caused by her alcohol-fuelled rages.