Mix equal parts class and sophistication with a liberal dose of rock 'n' roll and you have ELLE's latest fashionista to watch. 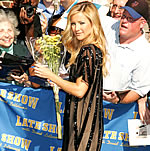 In Almost Famous we were introduced to Kate Hudson as a celebrity cling-on — hanging out with the boys in the band for a desperate shot at stardom-by-association. The actress herself, however, is no wannabe. Confident performances on-screen and off have made her one of a handful of Hollywood’s hottest.

Whose style should we analyze next? Tell us in our forums!

1. July 2006
Arriving for an appearance on the Late Show with David Letterman just days after announcing her split with rocker hubby Chris Blackwell, Kate Hudson showed the world she’s still got it. Dressed in a sheer mini, she glibly turned the other cheek to comments on her separation. Yes, she has earned those stripes.

2. July 2006
At the You, Me and Dupree world premiere, Kate Hudson is sleek in glittering gunmetal, begging the question: where does she stow her secret style weapon?

3. June 2006
Never short on style sass, Kate leaves only a little to the imagination at the MTV Movie Awards. In a draped mini, she manages flirtatiousness with elegant finesse.

4. February 2006
Kate gets all “glamour puss” on us in a monochromatic pairing that makes both a political and a style statement. Rapturously fuzzy at the reopening of Versace’s 5th Avenue Boutique in New York, she flits, she floats, she lets the fur fly.

5. July 2005
Kate shows her true mettle at The Skeleton Key‘s London premiere. Strapless and streamlined, she is a bronzed bombshell.

Check out a year in the style life of Angelina Jolie here!