Looper star Emily Blunt talks about her craft and about lasagna, child stars and the role she’d love to play next. 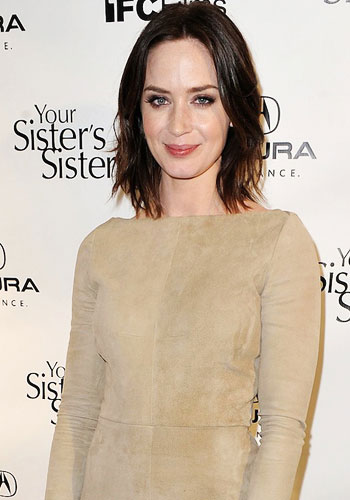 Emily Blunt, so huge in talent and so tiny in person, is chatting about an apparently deep-seated
love of shoes, as she charmingly battles a case of jet lag. Blunt has arrived at the Toronto International Film Festival to support Rian Johnson’s sci-fi action thriller
Looper in its world premiere.

She plays Sara, a gun-toting mother and rancher mixed up with a time-travelling assassins played by Joseph Gordon-Levitt and Bruce Willis.

Our interview starts with Blunt asking
ELLE Canada if shoes are our deal so we send the question right back.

What’s your deal?
Jet lag! No, I’m the girl who makes great lasagna because I make it with so many different cheeses it just oozes cheese into a puddle. I don’t have specific clothing traits. Maybe I am indistinguishable. That’s what I would prefer.

You radiate an unusually intense empathy on cinema. Is that something that you’re aware of?
People have said that before, but I’ve also been drawn to roles and enjoyed playing within the role lots of different things. No one is just one thing, just wonderful, or just bitchy.

People are many things but I really enjoy characters and when I read them I wonder "Oh, how am I going to do this?" You can’t box them in. I have heard that, but I find it strange talking about this because I don’t really know what I’m giving off. I don’t want to know what it is! [Laughs]

Sara takes on a traditionally male role in Looper. She runs the ranch, takes up arms and defends the homestead. I found that exciting.
I did too because so often I read scripts where the character is based on gender as opposed to an actual personality or character and you’re having to conform to a gender which I find really frustrating. I’m always encouraging writers, I always say "Write me as a guy, just write me as you would a guy and I’ll do the rest."

Because I think that Rian never thinks likes that. He just wrote the most fantastic character for any girl to play. I love that she has this fierce protectiveness and strength and this past that she was so regretful of and self-loathing of. And the ambiguity of the girl unpeeling her as you go through and finally in the monologue in the bedroom you find out why she is so guilt-ridden. I thought it was beautiful.

Until the end of the film, you’re the only emotionally stable adult.

When Rian and I met he said that, she’s "the heart" of the film. This storyline of her and her child is the heart and what grounds the film and I thought to myself "Oh, that’s pressure!" but he’s right. In a funny way, some people will say that Looper is along the lines of
Blade Runner or something, but we talked about the movie
Witness for my section of the film. It’s one of my favourite movies.

That isolation and tension and someone coming into your world and rocking it and upsetting it and the darkness of it that a set movie is what I drew from. Love or nurture is the redeeming feature in all of us, in all humanity to progress and prosper and learn from mistakes. All of us at some point have looked back on our lives at some point and gone " "If only I hadn’t done that I wouldn’t have ended up there". It’s about almost embracing those mistakes as well.

Did you have much time with Pierce Gagnon who plays your son?
I spent a lot of time with Pierce. It was the greatest moment where we discovered him. I can’t explain what happened in that room. We read with a few boys that they’d narrowed down this massive search. He was the youngest, he was five, and this little thing suddenly took on this spooky intensity for the part.

What differentiated Pierce from the other boys is that he really understood he was playing a character. He was a proper actor. When he was cast I spent as much time with him as possible, we’d go on little daytrips together and I’d have lunch with him every day. We played games between takes. I wanted him to feel comfortable with me and that it was okay to physically sit on my knee and put his arms around me and not feel awkward. It was important for us to have a bond.

When the film is over, how do you break up with a little five-year-old?
I can’t even talk about it. It was one of the most devastating days. He was beside himself. It was awful. It was awful. [Voice tightens, eyes redden and tear] We spent a month together. I really worried about him afterwards because I was thinking it must be so hard for kids. We get so caught up in it, it’s hard for us to leave a movie, but for him, he just didn’t know what was happening and why he wasn’t going to see these people again.

He was so sad. But we’ve stayed in touch, he sends me funny little emails and notes and presents and I send him presents. They’re not going to show him his part of the film because it’s too violent. They will cut a version together for him to see. Bless him. Five years old.

Do you think people are born actors?

I heard English actors really disdain the process and the method and it’s just hit your marks, know your lines.
I think so! I think all of the work behind it is not something to justify why you do this. It’s funny. I saw Inside the Actors Studio with Mike Nichols who I adore. He’s been a very good friend to me.

They asked him "What do you look for in an actor?" and he went "Hmmm" and you could see this whole audience of students waiting… the secret!! And Mike Nichols said "I think it’s great what you’re doing you guys, this training and I applaud it and good for you if that’s what you think you need.

Those are the best actors that I met the ones who are so interested in everyone and they’re soaking you up like a sponge. That’s what it is; you have to portray real moments. Life is surprising, I don’t know if you can fall back on a technique in those moments.

Is there anything you want to do that you haven’t?
I don’t know really. I don’t know because I never make plans for what I want to do next. Ill read something and go "This is it". I’ll know immediately. It’s very black and white for me, I can say yes or no within 20 pages. Maybe a western?

The lady in the frilly dress?
I’m not going to be the woman in a bodice tied to a tree. That’s not what I want to do! I want lots of guns, tons of guns, an obnoxious number of guns. I love period pieces. Young Victoria was just so beautiful and sweeping, but I also loved it because it was about a girl in a job who feels like she’s way over hear head.

It wasn’t about the monarchy, it wasn’t reverent in anyway. It was really quite an intimate story, so I love period films and I haven’t done one in a while. Maybe it’s time for a bonnet. Maybe that’s what’s next.

How do you view fame?
I’m the girl who pretends they’re talking about someone else. My brain does it, it’s not conscious. I’ll be on the subway and there will be a poster for a film and it will be my face. And I’ll go "Oh who’s that?" My brain slightly disconnects from that person.