Going from nice to nasty in her upcoming film, Jennifer Garner chats about broadening her roles, raising a family in the spotlight, and what's to come. 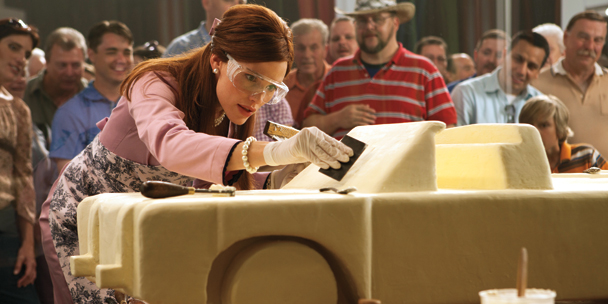 As Jennifer Garner leans gently forward in her chair, chatting away, I’m having a hard time concentrating on the nuances of what she’s saying. She’s gorgeous. Not in that girl-next-door kind of way that I’d always assumed—and that’s easily dismissed as somehow ordinary—but in a Venus-riding-a-scallop-shell way that makes you want to reach out and lightly stroke the side of her alabaster cheek. That she’s radiantly pregnant with
her and Ben Affleck’s third child only adds to the effect. But for the first time in her career, the 39-yearold actress, who is arguably one of Hollywood’s sweetest sweethearts, is being, well, a bit nasty—onscreen, at any rate. In
Butter (which premiered last fall at the Toronto International Film Festival), Garner plays Laura Pickler, a power-hungry potty mouth who tries to conquer the take-no-prisoners world of Midwestern butter carving (yes, it’s a real thing) alongside the town tramp (Olivia Wilde) and a used-car salesman (Hugh Jackman). ELLE Canada sat down with Garner to chat about getting laughs, taking risks and raising a family in the spotlight.

Butter has been in the works for a long time. It must be a relief to see it hit theatres. “I started working on this film when I was pregnant with a whole other kid.” [Laughs]

But this film is certainly a departure for you in terms of tone. So why take it on? “I’m a sucker for writing, and I thought it had a really fresh take on the Midwest— without being mean. It’s not nasty satire; it’s kind of sweet and funny, and it pokes fun at everyone.”

The director told me that his goal was to piss people off, though. “We [initially] pissed a lot of people off, but we toned it down a bit. I’m relieved that we did; there’s enough ugliness in the world. I don’t want to sit in a movie theatre full of a thousand people and cringe at what’s coming out of my mouth. But there are still parts where I’m like, ‘Oh, God, please don’t listen to this.’ For the most part, though, I’m with the character and the humour of it.”

More from Jennifer Garner on growing up in a proper home, raising a family, and being in the limelight, on the next page…

Is it tough to watch yourself play such a different person? “It’s actually a lot easier to watch yourself play somebody different. It’s when you’re playing someone who is close to yourself that you feel like ‘I have this stupid look on my face all the time.’ Watching yourself is always hard. You see things that you wish you hadn’t done or things on your body that you wish weren’t there, or you see your face changing. You see all kinds of stuff!” [Laughs]

So, how have you learned to deal with that kind of insecurity? “I’m not a particularly vain person. I just wasn’t raised that way. No one ever told me I was pretty—ever!”

I find that hard to believe. “Until I was an adult, I never thought of myself that way, and it didn’t bother me. It wasn’t something that a lot of value was placed on. We were almost Amish, I swear. My family all had long, straight hair. We wore no makeup, we had no earrings, we weren’t in bikinis. The Garner girls were very proper.” [Laughs]

Did that kind of upbringing make you want to rebel? “It wasn’t forced on us, it just was…. I don’t know how my parents did it, actually! I wish I could do it with my kids. My daughter is already saying ‘I wonder when I’ll have my first makeup kit’ because she sees me getting my makeup done all the time. I mean, every little girl should love makeup—it’s totally sweet and fine—but I sometimes wonder ‘Did I want that?’ [Sighs] You can’t control it, though; she has to have her own experience.”

Does that stress you out? “I’m not particularly neurotic, but I totally am when I’m pregnant. It must be a hormonal thing; I’m more cluckish—I want to make sure everyone is okay and safe.”

Then how do you deal with raising a family in the public eye? “You just can’t give in to it. You can’t moan about it. Ben and I are always talking to each other about how to adopt a normal life in unusual circumstances without adding self-pity into it. I wish that my children weren’t followed everywhere and that they didn’t have to have a relationship with the outside world. I wish people didn’t walk up to them and know their names. I wish 15 men weren’t aggressive in front of them and didn’t yell at them to try to get them to react and try to get me to react by yelling at my kids every day. But I have to say, given that it’s something I can’t control, my children handle it very, very well. It’s normal to them, and we don’t make a big deal about it or get mad in front of them. We’re very cautious about how we handle it when they’re around, and we talk about it openly.”

And when will it be time for you to start working again? “It’s a whole bunch of decisions piled into one. First of all, my kids are starting school now: My daughter is in kindergarten. They’re not as portable as they used to be, so that goes into it. Ben’s schedule goes into it in a big way. The health of the baby will go into it. Then you just have to dive in. Bring everyone along, bring a pump, have the nurse and baby on-set and do what you have to do. But I’ve done it before, and I know I can do it again.”

You seem in control. “Nothing bad is happening, you know what I mean? It’s a lot, but it’s all good.”