"We stand together. We stick up for the vulnerable. We challenge bigots. We don't let hate speech become normalised. We hold the line." 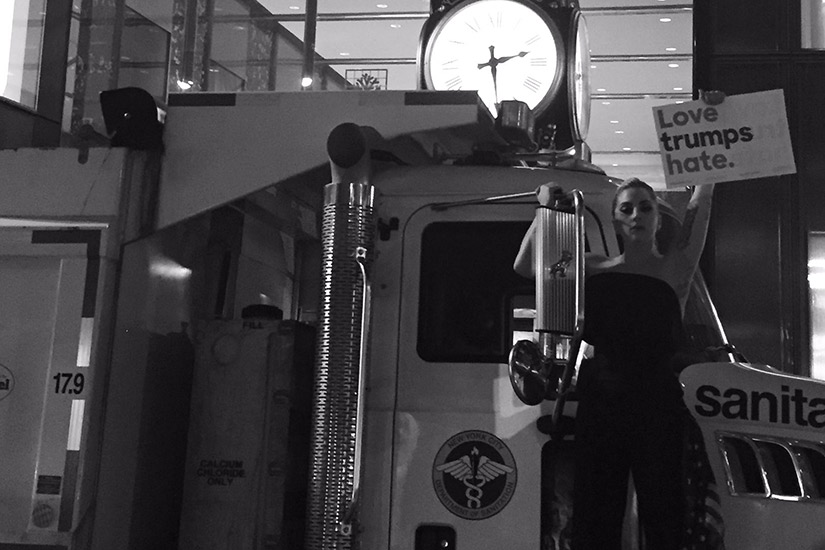 Awareness, Acceptance, Action. I am saying this acceptance prayer to myself as I fall asleep tonight. #ElectionNight pic.twitter.com/DdRywDdHFm

Woke up feeling like I’d had a nightmare. Then started crying again. Mantra: I am not alone, we are not alone.

OLIVIA POPE is trending. But Olivia Pope is not real. Whats real is the need for love today. LOVE yourself. Take CARE of you & your loved 1s

NOTHING IS FUNNY ABOUT TONIGHT‼️ MILLION OF WOMEN,?? POC??‍♂️ ?️‍?MUSLIM, N IMMIGRANTS ARE SCARED ?LESS #ElectionNIGHT

I feel like America just sent in our tuition check for Trump University.

This is an embarrassing night for America. We’ve let a hatemonger lead our great nation. We’ve let a bully set our course. I’m devastated.

We stand together. We stick up for the vulnerable. We challenge bigots. We don’t let hate speech become normalised. We hold the line. https://t.co/ro9AkRSc9Q

“In spite of everything, I still believe that people are really good at heart.”
Anne Frank pic.twitter.com/40lgFTgJeJ

Tradition over truth, arrogance over info, Fame over decency, white male power over, everything. Being horrible is a culture. #ElectionNight

Gonna miss Obama. maybe this country needs a Trump presidency to see just how good we had it and took it for granted!!!!! #GodBlessTheUSA

well this is utterly terrifying

Never in 15 years of living In this country have I ever felt afraid to look like I do. #immigrant

Hold each other close. It’s not over but this is a reason to really look at ourselves. What motivated this?

buckle yer bootstraps ladies and gents. we got major work to do. #UpToUs

The positive element from all this is that we can no longer pretend that we are free of racism & sexism. The question is, what do we do now?

Retweet if you want a recount

WE WILL NEVER BE SILENCED. #LOVETRUMPSHATE

My condolences to the President and First Lady. We will keep aiming high. We may not have you honored you this time, but we will honor you.

The hate tweets Im getting based on trying 2 promote unity inspite of division is a perfect example of how his hate has already affected us?

Really, people? ANYONE can be President? ANYONE? ANY-ONE?

Today we must continue to stand for what we believe in: love, acceptance, equality, fairness and respect for all. We mustn’t be divided. We must reach out and hold on to each other… To our friends, families and communities who share our common goals of unity, compassion and faith. I will continue to #spreadlove and fight hate at all costs. This is the beginning of a new chapter for our country, and together we must embrace it so that we can move forward as one. Know your values, keep your head high, stand strong… we’re in this together. ❤️?? #radiatelove

I will not kneel. I will continue to fight for equality. I will spread love. I will be a warrior of education & kindness. I will NOT kneel.

You know what we do now? We finish building what we started and we FIGHT BACK! Lift your heads up brothers and sisters.

My new home. @champagnepapi I need the hookup on some property. Nefew fuck this shit I’m… https://t.co/mvyNlXmxJa pic.twitter.com/BfvQLjzRyq

Dear Americans: It will be all right in the long run. (How long? We will see.) You’ve been through worse, remember.

Maybe this is rock bottom and there’s no where to go but up.

I am just absolutely beside myself right now. I can’t believe the way this thing has turned. Trying to remain hopeful but geeez louise.

I am disappointed, shocked and shaken at my core by what has transpired tonight. I gathered around the TV with my family and loved ones, ready to celebrate history being made. My daughter had this little blue dress on. I was ready to pop the Martinelli’s and hold her, watching Hilary Clinton become the first female president of the United States of America. But…It didn’t happen. I had a sick feeling in my gut, riddled with anxiety as the polls started coming in. After hours of a growing pit in my stomach, it was over. I left the TV, grabbed my daughter and took her to bed. But now, as I’m laying next to my her as she sleeps, I remember. Remember what I have control over and what I don’t. I don’t have control over Donald Trump becoming president. That has been decided. But what I do have control over is where I go from here. I will teach my daughter to love. All people, regardless of the color of their skin, gender, religious beliefs, sexual orientation or where their birth certificate says they’re from. I will teach her how important it is to be an advocate for humanity. Not just the portion of humanity that benefits her. I will teach her non violent communication. That in the face of hatred we must love each other even harder. Not give in. Not get discouraged or feel like our progress in the past is void. Keeping fighting for all of us, with an emphasis on those that and have been the most affected by systemic oppression. I will teach her that when she is silent during moments of injustice, she is siding with the oppressor. I will teach her that walls divide people, and by their nature cannot bring us closer. And that just because someone holds the most powerful position in the world, does not make that person right, just or fair. Donald Trump is not raising my daughter. I am. I get to encourage and nurture her to be who she wants to be. Teach her that her voice and actions can change the world. Teach her that she can do anything that a man can do. And one day, even become president of the United States of America. I have work to do. It starts now. And that work is the only thing bringing me peace at the moment