Charming. Refined. A visionary artist with integrity and grace. This is Cate Blanchett. 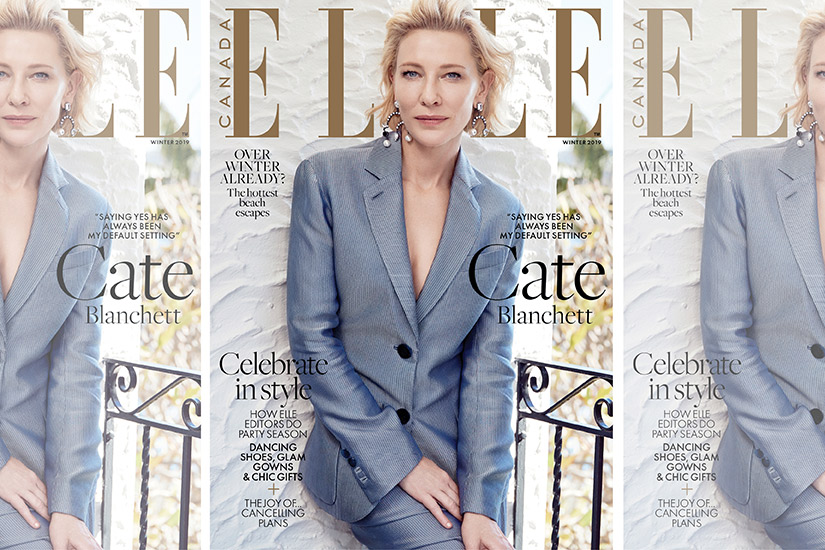 Cate Blanchett is a surprise from the moment she shows up. Wearing jeans and a T-shirt and no makeup, she arrives alone at the seaside apartment by Manly Beach in Sydney, Australia. The only clue identifying her as the award-winning actress is that same husky voice from the silver screen: “Hi, I’m Cate. Sorry, I seem to have caught a cold on the plane.” Though she is known for her poised demeanour, the Australian actress and global ambassador for Giorgio Armani Beauty gives us a warm smile.

Even non-movie fans would surely be familiar with Blanchett, but this Hollywood A-lister rarely appears in entertainment headlines. A search engine can confirm that she recently settled in the English countryside, where she is raising four children with her writer- director husband, Andrew Upton.

BLANCHETT DOESN’T HAVE social-media accounts. Her viewpoint on this matter is clear: “There are two reasons: For me, it’s too time-consuming, and for the other, communications over the internet can become narrow and negative; they can incite jealousy or anger without the counterbalance of face-to-face accountability. I fear that much of our engagement with social media is ego-driven—and I like to separate the ego from the ideas.”

Her advice to young actors is to set aside their ego. “As an audience member, I’m never interested in the actors’ personal lives. I want to forget all that and immerse myself in their characters and the story they are telling. The tabloid gossip around actors just gets in the way of engaging with the work.”

When it comes to acting, she craves real, creative dialogue. She enjoys working with visual artists, musi­cians, writers and directors and using more trad­itional methods. She collaborated with director Todd Haynes on Carol and I’m Not There—the former garnered Blanchett her fourth Oscar nomination for Best Actress, and the latter won her a Golden Globe Award for Best Supporting Actress. She admires the creativity of German artist Julian Rosefeldt; his short film Manifesto, in which Blanchett played 13 roles, was viewed by critics as a “true art film.” Last May at Cannes, she attended as jury president for the first time, which, she says, allowed her to gain new insights into the film industry. She is deeply concerned about climate change and the world’s wealth distribution, and she thinks about the mess older generations have created—the environmental, social and politic­al issues the younger generations will inherit. “I am sometimes worried about the future because I am a mother of four children. I often think ‘What will the world be like when they are 20, 30 or 40 years old?’” Recently, it’s refugee issues that have moved her the most. As the goodwill ambassador of the UN Refugee Agency, she has witnessed first-hand the difficulties that Rohingya refugees face. An 18-year-old girl she calls Laila left a deep impression in her mind: Her house was burned down, her family was killed and she was displaced with her newborn baby. “I am a mother, and I saw my own children in the eyes of every single refugee child I met. I saw myself in every parent. How can any mother endure seeing her child thrown into a fire? Their experiences will never leave me,” she said recently in a speech at a UN Security Council meeting.

TUCKED IN THE BACK of Blanchett’s transparent phone case are the yearbook photos of her four children: eldest son Dash, who just completed his high-school entrance exams, 14-year-old Roman, 10-year-old Ignatius and young daughter Edith. A day in her country life begins with sending her three older kids to school and ends with picking them up afterwards. She and her husband divide the chores evenly, but, even so, the following scene is a familiar one in their household: Blanchett with a laundry hamper in her arms, one ear to the phone as she discusses work while trying to free up an arm to sign some paperwork. “My kids are always telling me ‘Mum, you don’t have to do three things at once.’ Then they come help me put things away.”

Blanchett tries her best to work in an efficient, intensive and well-planned manner. “Being well organ­ized is the only way to get along with four children and the best way to satisfy both parties at work,” she says. Before the photo shoot began, she personally asked about the entire process and tried on every outfit. She has very clear perspectives but also fully respects stylists and photographers. She listens to their opinions before changing into the next outfit. “As a woman, one can feel like one has to do everything well. That’s the standard I hold myself to, but it can be exhausting.”

In a time when women’s rights are a major topic, Blanchett is glad to see the status of actresses in Hollywood changing, with more strong and talented female directors and producers turning the tide. “I don’t know when this misconception started,” she says. “This industry always assumes that most audiences going to the theatres are men over the age of 30, so they are willing to seek more budget and distribution channels for male-dominated movies. But, in fact, female audiences have long since exceeded half of all moviegoers.

“Many people only talk about women’s rights, but the discussion of gender equality is actually about campaigning for more for everyone,” she continues. “I think both men and women have been trapped under certain social expectations for a long time and that clouds their vision and ideas. I think equal pay will be a good start.”

WHEN TALKING ABOUT CATE BLANCHETT, you can’t ignore her stunning record: seven Oscar nominations and two wins. She has already transcended society’s definition of success, but she seems not to care at all: “I don’t just sit there thinking ‘Hmm, am I a successful actress?’” Blanchett laughs as she strikes a thinking pose.

“Success can be quite random. Some things are just meant to be, like if you meet someone and just feel like you know them…. I know many people who are very talented but don’t get the recognition they deserve. Think about Van Gogh. Think about all those writers whose works are only published after they’ve died. I consider myself very lucky.”

In 1992, 23-year-old Blanchett graduated from Australia’s National Institute of Dramatic Art. Afterwards, she participated in many theatrical productions, most of them Shakespeare. Years of stage training gave her the habit of reflecting on her mistakes: Why did things go wrong this time? Why are these mistakes made? “I only care about failure, learn from it and make sure I don’t make the same mistakes again,” she says. She did not stop acting in theatre after making her mark in Hollywood. Last year, she brought her husband’s play The Present, an adaptation of Chekhov’s Platonov, to Broadway. To no one’s surprise, this debut won Blanchett her first Tony nom­ination, and she’s in rehearsal for her upcoming role in Martin Crimp’s When We Have Sufficiently Tortured Each Other at the National Theatre in London. She and her husband used to run the Sydney Theatre Company, for which they once moved back to Sydney for 10 years. “If you made me choose between film and theatre, I would definitely choose theatre,” she says. “There is a real sense of camaraderie on the stage. You have a more direct connection with the audi­ence. Film reviews and audience reactions are two very different things.”

When interacting with others, Blanchett is frank, humorous and outspoken, and she’s forthcoming about her own shortcomings. “Where do I begin? I am im­patient, have perfectionist tendencies, have a fear of heights…there are too many.” Her modesty is charming, and so is her straightforward nature. “The most interesting women allow all their complexities to co­exist without ever feeling sorry for themselves,” she says. “She is definitely her own person. She doesn’t want to become anyone but strives to be her best self.”

The World According to Cate

You are also the face of Sì fragrance. Sì means “yes” in Italian. What is your understanding of the Sì attitude? “I think saying yes has always been my default setting. People around me often tell me that I should learn to refuse, that you can’t take care of everything. But I am always willing to try—doing something is better than doing nothing.”

What encouraged you to keep working with Armani? “It has been a very creative relationship. My relationship with Armani began in my student years, many years before I met Mr. Armani in person. I’m very interested in men’s clothing. I bought my first Armani men’s suit when I was studying in drama school. Armani represents more than fashion and beauty—it’s also about architecture and food. It represents a lifestyle.”

Describe a scenario that makes you feel absolute bliss. “When I wake up on the weekend, my first reaction is ‘Oh my gosh, what is my schedule today? What do I need to do?’ In that moment, if someone were to say ‘You don’t have to do anything today. There are no plans.’ Then someone suggests ‘Let’s take a walk in the forest!’ Or, ‘Let’s stay in our pyjamas all day! Let’s just sit and see what happens!’”

What are you currently afraid of? “Skydiving! Gosh, I will never try it!”

How do you define success? “Success to me is having the ability and time to think. I pay more attention to failure. I think people can learn more from failure.”

What are some feminine qualities you admire? “Wisdom, generosity.”

What do you see in the ELLE woman? “ELLE gives me the feeling of being very free. You know, fashion can sometimes be very serious and sacred. But ELLE makes it lighthearted and fun.”