After three years away, this actress is returning to Hollywood—in a blockbuster way. 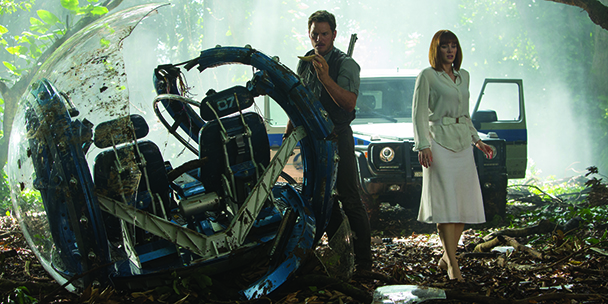 After 15 minutes of near silence, Bryce Dallas Howard’s voice suddenly bursts onto the line. “Hellooo!!!!!” she says with so much energy and enthusiasm that I can’t help but grin from ear to ear. Her publicist in Los Angeles has been trying to track her down on the other side of the world, in New Zealand, so some waiting and holding is to be expected. And that kind of hello is worth the wait—because not only does it warrant five exclamation points when written but it also makes me think the 34-year-old actress must be grinning as well. And if Howard is smiling, it’s for a good reason: Her return to the acting world after almost three years away sees her headlining this year’s biggest summer blockbuster, Jurassic World. “2015 is shaping up in a way that’s pretty exciting for me,” she says while taking a quick break on the set of her next film, Pete’s Dragon (out in summer 2016).

The Village, Spider-Man 3, Terminator Salvation, The Twilight Saga: Eclipse—Howard’s career can be charted in big-budget summer blockbusters. And her return is no different. After six non-stop years of sharing the screen with mysterious creatures, superheroes, robots and vampires, she bowed out of Hollywood to spend more time with her children, Theo, 8, and Beatrice, 3, and her husband, actor Seth Gabel; now she’s back to add dinosaurs and a dragon to the list. Considering that her career has been made up largely of supernatural en­counters, the first question I have to ask is how she—a classically trained actress with a predilection for existentialism—wound up in a bunch of action films whose target audiences fall somewhere between video-game-playing basement dwellers and lust-addled teenagers.

“I just think they are so engaging to watch,” says Howard. “And while they all have some element of spectacle, they also ask deeper thematic questions that res­onate globally. With Spider-Man 3 it was ‘With great power comes great responsibility,’ and then with Terminator Salvation it was ‘Can you change your destiny? Can you save the world?’

These stories have very powerful messages, but they also ask complex and h challenging questions that we’re all faced with in our lives, even if we’re not swinging from buildings or running for our lives or stopping an apocalypse. I love watching those movies, so when I get the chance to be in them, it’s really exciting.”

For the reboot of the cult Jurassic Park franchise, Jurassic World picks up where the last film left off: It’s 22 years later, the park is open again for business and scientists’ quest for genetic marvels takes a very expected deadly turn. The trailer, which came out late last year, went viral in a matter of hours, with fans cheering the return of a “classic.” And for a certain generation (those 35 and under), it really is. “This is something Chris Pratt [with whom Howard stars alongside] and I talked about a lot. Jurassic Park is like our Star Wars,” she says. “I have very distinct memories of going to see the film for the first time. It was a seminal film for our generation. It represented the power of not just cinema but also storytelling and how it can really transport you to a place that you could only have imagined or read about.”

READ MORE: How Kate Middleton snapped such an adorable pic of the princess

But it’s Howard’s deep curiosity about existentialism that becomes most apparent as we talk about the film. Before long, we’re discussing the merits of biotechnology as she effectively breaks down the term “thintelligence,” coined by Jurassic Park author Michael Crichton, as if she were sharing a recipe for peach cobbler. “We view technological innovations as an extension of human intelligence. But what happens when we become so focused on the progress and advancement of technology that we can only see what’s immediately in front of us? That’s really the central jumping-off point of the film,” she says. “I think about what the social implications may be for my children down the road. It’s crucial to contextualize everything—not to stop progress but to balance everything. Progress with perspective and wisdom.”

Her children come up often. “With my kids, the question always in my mind is ‘How can I preserve their innocence for as long as possible?’—not in a stifling way but in a way that gives them the gifts that I had in my childhood,” she says. “It’s so weird to now be in that place where I’m like ‘When I was a child…’ and idealizing my own experience the way my parents and grandparents did,” she adds with a laugh.

READ MORE: What we should talk about when he talk about Caitlyn Jenner

Her parents, of course, are award-winning director and producer Ron Howard and writer Cheryl Howard, although the actress is quick to dispel any romantic notions one might have about her growing up in Hollywood. “It was a hectic household with four kids and working parents,” she says. “But I saw the joy of working in a creative industry and how they made it work and how they balanced it—or occasionally didn’t—and that was my version of normal. And now that is what’s happening in my world. My husband and I are both actors and, again, it’s not like we’re reading poetry to our children or reciting Shakespeare, but they know what’s up and hear us talking about characters and stories. They’re really interested in their imagination, so we can relate on that level.”

As well as raising a family during her time off, Howard went back to New York University to finish her degree in drama, creative writing and sociology. “I left in my third year to do The Village,” she says. “But I stayed in touch with my professors because my intention was always to go back—without really realizing where my life would take me, like having kids so young and staying in Los Angeles. It’s kind of a surprise to realize that it has been over a decade since I was in school!”

But it’s her career she credits most with allowing her to continually satisfy her curious nature. “It takes a lot of courage to step outside your comfort zone and do something so different, and I feel really lucky that my job facilitates that,” she says in a tone that makes me think she’s still smiling from ear to ear. “And I think that’s all we want to experience when we open a book or sit down to watch a film: We just want to be taken on a ride.”