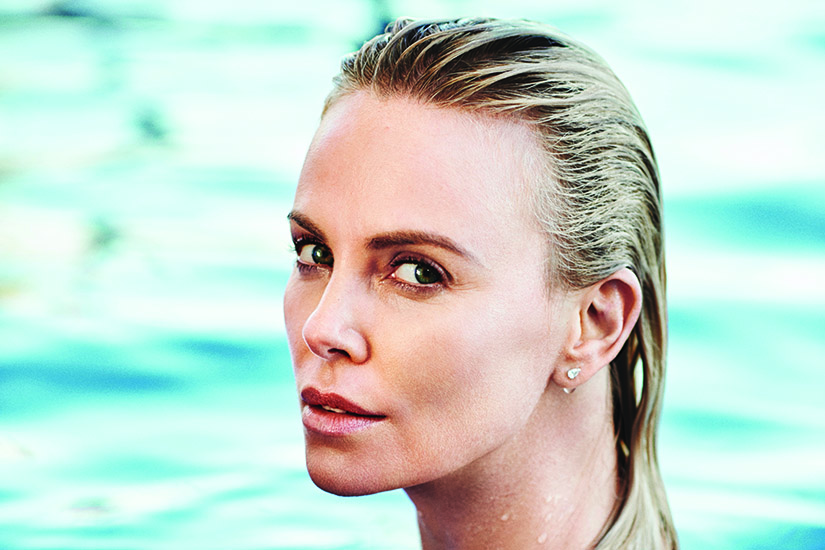 The crew is patiently waiting for Charlize Theron to emerge from hair and makeup for the last shot. It has been a sunny but cool day in Los Angeles, and we’re wondering how she’s going to feel about climbing into the pool. Wearing a one-piece bathing suit, the tall blonde approaches the edge and dips her toe into the water. “It’s freezing!” she says but then quickly pulls herself together and slides into the water without a second’s hesitation. She’s like a Greek goddess unaffected by extreme heat or cold (unlike we mere mortals).

Later that day, in the luxe living room of her Hollywood Hills mansion, Theron appears for the interview wearing a simple white robe. Her face is makeup-free, and her wet hair is casually tousled. She’s a generous conversationalist, which isn’t always the case with actors. We chat about the Africa Outreach Project she launched in 2007 to fight HIV/AIDS, her two children—four-year-old Jackson and one-year-old August—and The Last Face, the film she made with her ex-boyfriend Sean Penn. You’re left with the impression that Theron is an intelligent, confident woman who has led a rather extraordinary life. Case in point: her impressive filmography. She has often chosen extreme and rather disturbing roles, such as serial killer Aileen Wuornos in Monster (2003). For this film, she famously gained 30 pounds and was made to look very unattractive. The upside? She won an Oscar for Best Actress in 2004. Last year, she starred in Mad Max: Fury Road, sporting a shaved head and missing an arm. She jokingly suggests that playing these disturbing characters has been rather cathartic. “I’ve never had any psychotherapy,” she says. “Being an actress is enough.”

For the past decade, she has counterbalanced these dark roles by playing the muse for Dior’s J’adore fragrance. The campaigns all depict a modern woman at different moments in her life. Theron smiles when asked which character she is most like. “I lay claim to all of them,” she says, laughing. “I think that women can be all of these things at once. It’s a big mistake to think that we can play just one role: a mother or a seductress, a homemaker or a working girl. In the past, women suffered too much from being categorized. Like men, they are multi-faceted.” She uses her own modelling background to illustrate her point and also to showcase how things have changed.

“Remember that when I first started, there were no models who went on to become actresses,” she explains. “It was really frowned upon. If it did happen, people thought that these no-talent girls were exploiting their beauty to get acting roles. So I tried to keep my distance from modelling as much as possible so that I could assert myself as an actor. Fortunately, things have changed a lot over the past 10 years, and these boundaries no longer exist. And it is a tremendous pleasure for me to be Dior’s muse.”

Some people say that you are inaccessible, even secretive. How do you, as an actress, live with the fact that you have to expose yourself in your films? “But that’s just it! I don’t expose myself in my films—I play a role. There is a false and very widespread belief that an actress has to give up her privacy. I don’t believe that. I don’t reveal some parts of my private life to the public. That’s what I need to do to preserve my mental health. I want to be able to come home at night and feel that part of me is still intact, secret.”

At the beginning of your career, you said you dreamed of seeing your name on a billboard on Sunset Strip. How do you feel about seeing it today?  “Oh, did I say that? [Laughs] My greatest dream at that point in my life was simply to make a living with my art. I know a lot of actors who didn’t make it and who have to take on any sort of job to make ends meet. It’s really hard. I feel exceptionally lucky.”

You’ve achieved so many of your goals. What drives you now? “It’s always the same: to tell stories. I see myself less as an actress than as a storyteller, both when I play a role and when I produce films through my own company. Being involved in creating a story that moves me, that makes me think, that makes life more exciting—life doesn’t get any better than that.”

I’ve read that you are very close to your mother. What role does she play in your life? “An essential role. We see each other all the time, and we can talk about anything—but that doesn’t mean that we’re joined at the hip! [Laughs] She is a solid, down-to-earth person, and she likes people. She can get up at five in the morning to go hiking with her friends. I really admire her! She thinks nothing of packing her backpack at a moment’s notice to join me for three months of filming in Hungary and do a little babysitting.”

You have adopted two children in the past few years. How has that changed your life? “Everything has changed! When I became a mother, I had already wanted it for a long time. I craved motherhood, and I was incredibly invested in it. It’s not easy to adopt, even when you’re a celebrity. But when I held my children in my arms, I was happier than I ever expected to be. Today, motherhood is a source of joy every single day, something stronger than everything else, more powerful than my career.”

You adopted as a single mother. Do you feel that you represent an alternative model for parenting? “I don’t know. I’m not trying to prove anything or become a symbol. It’s just the way things worked out. When you adopt, you have to do it unconditionally. I threw myself into the adoption process because I was convinced that I could fulfill the role of mother and give my children all the love and attention they need. No one aspires to become a single parent, but I learned a long time ago that you can’t control everything in life. I have adapted to the situation because I am pragmatic.”

In Sean Penn’s latest film, The Last Face, you play a woman who works for an NGO in Africa. Does this role reflect your own experience as a celebrity activist? “Not really. My character is a real humanitarian professional. My work with the Africa Outreach Project is much more modest. I try to surround myself with experienced people and learn as much as possible. I also try to go into the field as much as I can to gain an under-standing of the situation. But I am definitely not as involved as she is.”

In the film, the two characters are in love, but their visions of their work are completely different, to the point that it drives them apart…. “The character I play thinks that poverty should be dealt with on a large scale, on the macropolitical level. Her lover, the doctor played by Javier Bardem, has the opposite view: that people should be helped on an individual basis, every day. Beyond the humanitarian issues at stake in the film, these differing viewpoints are ones that speak to us all. You can be madly in love with someone, but your world view, your beliefs, can be diametrically opposed.”

You are fighting against AIDS and sexual violence in Africa and for equality of the sexes and gay marriage. Where does your passion for activism come from? “It’s just my personality, who I am. I’m a militant; I like to take action and get involved in issues. Even if I weren’t famous, I’d be the type of person who writes to her MP. I grew up in a situation of extreme injustice: apartheid. Given what I saw as a child in South Africa, my involvement is unavoidable.”