Behind the March 2012 covershoot: Amanda Seyfried

Amanda Seyfried gets real about babies, boys and getting naked. 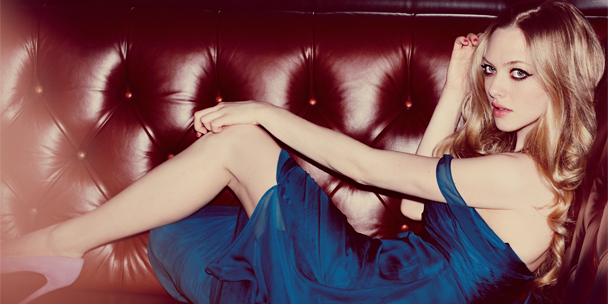 On this cold, rainy evening, Amanda Seyfried’s 26th-birthday shindig is the place to be. In an impossibly glam five-storey townhouse in Chelsea, N.Y., throwback Madonna tunes blast while sexy (candy) cigarette girls circulate the room, which is overflowing with cakes and confectionery. I’ve spotted at least two pairs of the infamous
Miu Miu glitter booties already.

Sadly, a delayed flight and a mad dash into the city have left me in the distinctly non-party ensemble of cheap jeans, soaked hair and flats. I’m amazed I wasn’t barred from Manhattan. Pledging to travel in a party dress from now on, I snatch a glass of champagne and head off to find the star.

Seyfried is holding court in a salon on the third floor in a white and gold beaded dress from Alberta Ferretti’s latest collection and sky-high Jimmy Choos. Her face is framed by a soft, flapper-style chignon, and her
skin is so flawless that I surreptitiously glance around to see if there is an Oprah halo light in place.

A former model, Pennsylvania-born Seyfried got her big break as the ditzy Karen Smith in the cult favourite
Mean Girls before playing the daughter of polygamous parents in the acclaimed television series
Big Love. Then she sang and danced her way onto the A-list in the screen adaptation of
Mamma Mia!

Although there are throngs of people in the packed room clamouring to meet her, Seyfried is affable. When Lucia Pieroni, makeup creative director for Clé de Peau Beauté, introduces her as “stunningly beautiful,” Seyfried crosses her eyes and sticks out her tongue—no matter that she’s now the global face of the prestigious beauty brand. In fact, she is—dare I say it—disarmingly normal throughout the entire evening.

But how much of this charming, down-to-earth vibe is a carefully constructed persona? She is an actress, after all. Rumours abound of her interviews being closely monitored by publicists, but that’s not the case when we head downtown the next morning to the Crosby Street Hotel—one of her favourite SoHo haunts. Sitting on a large sofa with her heels kicked off and feet curled beneath her, she’s eager to talk about anything I throw at her: namely, sex scenes, drugs and getting knocked up.

Amanda Seyfried talks about her exhibitionism on the next page…

You got your big break working with Tina Fey in Mean Girls. How did that set up your expectations of the industry? “Working with Tina was one of my first experiences, and it was one of the best. Thank God for her. She’s so hot and self-deprecating, and, yes, she’s practically perfect in my eyes. She taught me that you can get really far in life with a great sense of humour.”

I’ve noticed you’re often relaxed discussing topics that others may shy away from—like how much fun sex scenes can be. “Definitely! They’re so fun. I’m a straight woman, so I’m already used to the physical aspect of being with men. It’s familiar territory. It’s just work—feelings don’t go deeper than the scene. And, come on, who wouldn’t like to make out with a really attractive man? That’s what we want in life. It’s fun. There are no consequences at all.”

I was just watching Dear John in the screening room before our interview. Hello, Channing Tatum. “Channing is so awesome and so playful. He kept saying ‘This isn’t weird!’ Justin [Timberlake] made it so easy—he’s a great kisser. With Julianne Moore [in
Chloe], it was a bit tougher because it was with another woman. There was nudity, and [the director] was trying to get a specific shot.”

Isn’t it awkward? “Sure— there are people watching you, but I’m used to it now. That’s not to say I’m jaded, either—it’s very exciting. At one point being naked was weird, but now I’m just a good old-fashioned exhibitionist. You can do all kinds of crazy things in movies and not take it home with you.”

Aren’t you a little young to be having baby fever? “My mom and I got into this discussion in the middle of the night recently. She suggested I wait until I’m 29 or 30, but I said I wanted to start sooner. Maybe I should plan to get pregnant at 29….”

Isn’t there supposed to be a significant other involved in this situation? “Yes. [Laughs] There isn’t right now! But that’s the thing: The new, modern-day way is if you want a baby, you just have one, regardless—which is interesting. It might be the only way.”

I don’t think you need to rule out the traditional model just yet. “A unit is great, but nobody should be 100-percent dependent on somebody else. Independence is so important to have a really fulfilling life. Most committed relationships usually fall apart.”

You don’t really seem to end up as tabloid fodder as often as other celebrities.
What’s your take? “My personal life is pretty boring! How many pictures can they take of me walking my effing dog? My wish is for [the paparazzi] to be banned. It’s a bad part of our culture. It’s weird how much access we have. It used to be that we didn’t know our actors. Now we know what everyone’s cellulite looks like. It’s gross.”

At the party last night, you mentioned that being a brand ambassador feels a little overwhelming at times. Is there a different kind of pressure because you’re not acting but rather appearing as yourself? “Sure. I’m not always going to be perfect, nor do I really expect that. But I’m about having a clean,
healthy perspective. Do I respect myself at all times? No. But I have a semblance of it. I’m growing toward it. It’s not realistic to love yourself all the time, but for the most part, it’s something we should all focus on.”