BACHELOR RECAP: The 6 most awkward moments from last night's episode 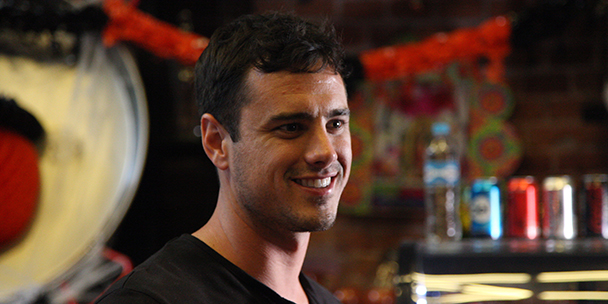 Boring Ben’s season continues apace! We’re getting close to the end, which in theory means the romance factor is at an all time high, but in practice just means it’s getting more and more awkward for this guy to be dating all these women at once.

Some highlights of a particularly uncomfortable night…

So after last week’s cliffhanger—Emily reveals to Ben that Olivia is this season’s ‘different around us girls than with you’ character, he pulls her aside before the rose ceremony, end scene—the episode begins with Olivia persuading Ben that she’s just misunderstood by a bunch of girls who “like painting their nails and doing her hair”, when she just likes to read books and quote, “talk smart things”.

2) Kayla gets a second date…

And now they’re in the Bahamas! Disney princess look alike Kayla gets a second one-on-one, which makes other girls (aka Leah, who you literally have never seen before) mad, because they haven’t had any chances for a face-to-face guidance counselling session, err, we mean romantic time with Ben.

Ben, in true Human Resources professional form, uses affirmative statements and sympathetic facial expressions to get Kayla to “open up”; she balks, which actually makes us like her more. Then she gets into a confusing explanation about how she “feels like she’s falling in love”, but isn’t sure if that actually means she’s falling in love. Ben thanks her for sharing, and then reveals he how that confusing conversation really lights his fire. They also both kiss a fish on this date.

In what may be a top five finisher in “weirdest dates ever”, the group date takes place on a tiny sandbar apparently inhabited by salt water dwelling pigs that Ben thinks it will be fun for the ladies to cuddle and feed hot dogs (chicken hot dogs, to be clear). Most of the women seem to spend the entire date running from the aggressive hogs while Ben and Lauren B canoodle off shore.

Remember Leah from earlier? After having approx 4 seconds of screen time before this, the episode in dominated by a weird plot involving Leah telling Ben that Lauren B (“who he has the most obvious connection with”) is different in the house “and does catty things”. This is a brilliant move, since nothing confuses a bachelor more than the thought that maybe all these women aren’t “here for the right reasons”. In step 2 of her plan, Leah heads over to Ben’s for some after hour tash talking, which backfires and ends up with her leaving. Did we mention that Leah was asked by the other girls if she’d spread the Lauren B rumour, and flat out lied, apparently forgetting that she’s on national television.

In a bit of sad exit for this season’s supervillian, Olivia goes on a two-on-one with Emily, and is surprisingly rejected by Ben after telling him she loves him, and again reiterating her love of “news and books”. Emily and Ben go off on a boat, and Olivia is literally left on a rocky outcrop in the ocean all alone, save for the drone that’s filming her humiliation from above.

Why is this season of The Bachelor so relentlessly boring?

5 “amazing” things to happen on the Bachelor week 5