Mad Men star Alison Brie opens up about dodging TMZ and her sexy image in ELLE's behind-the-scenes interview of the April 2012 cover shoot. 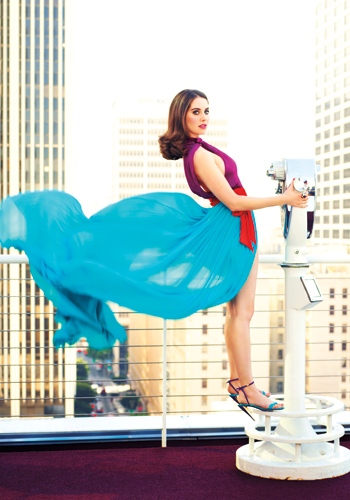 Alison Brie is standing on the roof of The Standard hotel in sunny Los Angeles, striking a pose for the camera and laughing as the wind kicks up the hem of her Dolce & Gabbana dress—a saturated version of Marilyn Monroe’s famous grate scene. It’s almost too fitting, since, at 29, this doll-eyed knockout defines the modern bombshell: whip-smart, sexy in a way that both women and men can covet—and totally unconcerned that half the people on the hotel terrace sipping late-afternoon imported beers can see her underwear.

Clearly, Hollywood agrees that she’s having a moment: She’s currently taking over the big screen in Judd Apatow’s latest comedy, The Five-Year Engagement, alongside Emily Blunt and Jason Segel, and reprising her roles in the much-awaited new seasons of Mad Men and cult-fave Community.

Brie first made a name for herself in the theatre world, though—before taking a guest spot on Hannah Montana in 2006 to help pay the bills. (Besides, it was better than her previous gig as a birthday-party clown.) “I spent all this time being such a snob about TV,” she says with a smile. “Then, as soon as I worked my first job, I loved it.”

It didn’t take long for her to get cast as Upper East Side wife Trudy on Mad Men, the better (although not very yielding) half to Vincent Kartheiser’s Pete Campbell.

But despite her knack for playing buttoned-down characters (Community’s Annie is so tightly wound, she’s likely to snap a tendon at any moment), Brie is the kind of girl I’d want to party with. (And I’m not alone—her girlfriends have been texting her non-stop all day.) “I’m generally well behaved when I’m working but maybe not so well behaved other times!” she says, laughing. “As long as TMZ isn’t around when that’s happening, it’s all good.”

Still fresh from screening her latest project, Save the Date, at the Sundance Film Festival, which she describes as a few days of “too much coffee and booze—and not enough sleep and water,” Brie sits down with me over a round of pear martinis and fries to talk about nudity, Mardi Gras and marriage.

Did you always want to act?
“I’m sure in one of my notebooks in, like, first grade, I said I wanted to be a veterinarian or something, which is weird because I don’t even really like animals…. [Laughs] My first role was Toto in The Wizard of Oz at the Jewish community centre. I had no lines; I just crawled around on all fours barking the whole time.”

Now you’re starring in Judd Apatow’s The Five-Year Engagement. What was it like working with Apatow, Segel and the rest of the bro crew?
“They’re cool, easygoing guys who love working with their friends—and it just so happens that their friends are all so amazingly talented. They’re not elitist assholes. When new people come in, they’re not like ‘Sorry, we have a little crew already.’ They’re like ‘Come and play with us.’”

Do you think a lot about first impressions?
“When I first started acting class, there was this exercise where you’d walk into the room and then everyone shouted their impression of you. Nobody was especially cruel, but I got ‘horseback rider’ so many times. It’s so weird. I like to think it’s because I have such good posture.” [Laughs]

Maybe it’s because you look very Upper East Side.
“That’s funny because I grew up living in a duplex. We lived in South Pasadena, and I had a nice, middle-class family but no horses! I play uptight personalities, but I’m not myself.”

Alison Brie talks about being a free spirit, being happy with herself and what it means to be a bombshell, on the next page…

So you’re more of a free spirit?
“We joke that my older sister is kind of the boss of the family. I’m able to be more silly and irresponsible—an artist. But suddenly I noticed that when I’m planning trips with friends, I’m the one finding us a house and making sure everyone gets their flights on time. I’m like ‘Wait! I’m not supposed to be Annie. I’m supposed to go out and have fun.’”

I hear the cast of Community goes on vacations together.
“We’ve been to Mardi Gras, and we also go to Lake Arrowhead’s Oktoberfest. There are stein-holding and beer-drinking contests.”

Lederhosen?
“I’m more of a plaid-shirt girl. But we’re actually going back to Mardi Gras this year.”

I’m sure Mardi Gras would be a trip with you guys.
“The key is scoring a good balcony, so instead of being the girl on the street who’s flashing her boobs for beads, I’m the powerful girl up on the balcony, deciding who will get the beads. Last time I was like ‘Should I feel bad about doing this?’ I felt pretty good, though, actually. I thought I would be a good judge of boobs because I’m familiar with them.” [Laughs]

Speaking of which, this is ELLE Canada’s “bombshell” issue. What does that mean to you?
“I think of a voluptuous woman with curves, which I think is coming back because of Mad Men. We went through heroin chic— thank God that’s over, for my sake.”

We think you’re a bombshell. Do you?
“Well, it’s someone who owns her sexuality and uses it to her advantage in a smart way. Women should embrace the way they look and realize that guys are always going to want to have sex with them— we’re women, after all. [Laughs] Gillian Jacobs and I got some flack for posing for GQ in a sexy way. There are still articles about why women in comedies feel they have to be sexy instead of just funny. I don’t think you’re exploiting yourself if you choose to embrace your sexuality and have fun with it. It’s really about being honest with yourself and what you’re comfortable with.”

Our April 2012 cover girl talks attending a clothing-optional college, dating, and dealing with the media, on the next page…

Have you always been so comfortable with yourself?

“It’s just part of who we are, I think, as human beings! I went to California College of the Arts, and it’s very open—clothing is optional everywhere but the cafeteria. It’s not like I was going to class nude, but there was a lot of performance art where people would paint their bodies in chocolate or whatever. There was also always the token naked guy at the Friday-night parties in the main lobby of the school. He was awesome. Of course, we became friends.” [Laughs]

Did you ever take advantage of the no-clothes-required policy?

“From time to time I would put on a pair of tennis shoes—nothing else—and go for a little jog around the campus or swing from the trees to make my friends laugh. It was just funny; it didn’t seem weird to me. Even in college, I would go into the backyard, take off all my clothes and pretend to be a wood nymph behind the bushes for laughs.”

You wrote a comedic, but true, essay about having sex with your gay friend in college. Did you give any thought to how that would be received?

“A lot of people misread it as some weird confessional memoir. I just thought it was funny. I didn’t think it was going to get as much attention as it inevitably got. I’m not interested in hiding who I am, though. I’m fine with me—hopefully you guys will be too.”

You’re very open—and yet little is published about your personal life. Why is that?

“It’s a new thing for me to decide how to manoeuvre it. I’m single now, so dating has become an interesting monster. I have to be like ‘Let’s hang out—but could our
first few dates be a bit more private?’ That’s weird, though. It goes against the grain for me to hide anything, but then you read something later and see how wild speculation is. People see two people walking together down the street and…”

“I’m always like ‘I hope I’m wearing flattering pants in these photos!’ I think I have to decide just not to care.”

“Meeting people you want to spend a significant amount of time with is difficult enough without thinking about who’s watching. I didn’t fall into any of that in high school, though, so why should I be open to it now? Not that people really cared about who I was dating in high school.” [Laughs]

What kind of guy are you looking for?

“I’ve just been looking for somebody I feel excited about. He better have a job and all of his teeth. Hair is optional. I like a little belly on a guy, but I’m okay if he’s fit. [Laughs] But, really, it’s all about the spark.”

Between The Five-Year Engagement and Save the Date, you’re in a lot of wedding movies. Is art imitating life?

“It could not be further from what I personally want. I don’t even know if I want to get married. I’ve never been the girl who’s planning my dream wedding— I was always practising my speech for the Oscars. That was my dream, which is kind of sad but kind of great.”

Do you think the mindset about marriage is changing?

“I do. Our parents got married because it was expected of them. Even my parents, who are hippies, felt some kind of pressure, I’m sure. I don’t know that I’m the marrying kind…. It’s hard to work in an industry that changes from minute to minute and then lock into thinking of something as forever. It’s kind of daunting. Maybe I just haven’t met the right guy yet—that’s the flip side.” [Laughs]

That’s always the question, I guess.

“I’m the same way about kids: I never thought that I wanted them and suddenly I was thinking ‘Well, maybe if I met the right guy I would.’ I’m probably just very self-involved and not ready for kids. [Laughs] Luckily, my older sister is. I’ve always envisioned myself more as the cool aunt, but you never know! You could be interviewing me again in two years and I’ll be like ‘I’m so happy that I’m married and pregnant.’ I think you just have to be true to yourself in the moment. That’s so cliché that it’s got to be true.”

So, no regrets so far?

“Sometimes I wonder if because I place so much importance on my career and I get so much from it that I’m obsessed with it. Will I regret that later? Even with turning 30 being imminent, I think I still have time to figure that out.”

Behind the March 2012 covershoot: Amanda Seyfried