Amanda Seyfried on fame, stress and the meaning of life 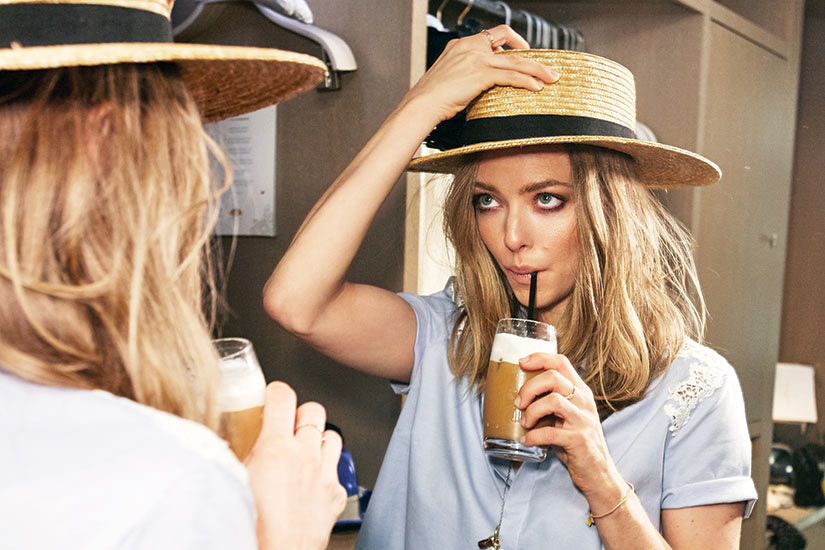 Like a whirlwind, Amanda Seyfried tumbles into a palatial suite in the Mandarin Oriental hotel in Paris. A doll-like creature in a pair of dark jeans and a T-shirt, she’s yawning—a lot. “Jet lag and late bedtimes,” she explains. “But I can’t complain—it’s my job.”

She grabs some fruit from the kitchen island and then drinks a macchiato before taking a seat in the bathroom, where her glam team start to prep her for our shoot. She is very at ease, twirling and laughing while chatting with her makeup guru, Mary Greenwell, and affectionately kissing her publicist.

Time for the first picture. Our photographer, Riccardo Tinelli, worries that Seyfried might be too tired; on cue, she yawns again. But as soon as she’s in front of the camera, she comes to life—for a few seconds at least. It’s enough to give us a winning shot before she fades again. As the day moves along, Seyfried seems to gradually wake up, and by the time we wrap, she’s jumping on the bed.

As the day ends, Seyfried has plans to get her hair cut in the bathroom, but, before that, she’s in the mood to talk. “Let’s do the interview on the bed!” she says enthusiastically, in the way she has that makes everything seem exciting, even if it’s just choosing where to sit.

In fact, as we talk, with Seyfried lying on the bed, the conversation almost immediately takes a dark turn of its own. (As you’ll see, it starts with confronting one’s mortality.) “Sorry!” Seyfried apologizes. “It’s funny because sometimes I don’t really know what I’m talking about.”

You started acting at 15 years old, and you’ve done 27 movies so far. You’ve only just turned 30! “I’m scared of getting old. How quickly time flies! How quickly the years go! It’s scary.”

There is a scene in your ad for Givenchy Very Irrésistible where you tap your foot and the lights of the Eiffel Tower turn on. Has life been like that for you—you just get what you want? “It’s not that easy! But usually, yes. I get what I want, for the most part.”

Are you in love? “Yes. With myself. I found last year really intense, in terms of my career and big moments—wonderful moments, horrible moments and personal moments, including a breakup. After filming Twin Peaks last September, I just collapsed into myself and felt the lowest I’d felt for a long time. That’s when I started practising meditation, self-knowledge and self-awareness. I overcame something, and hopefully I’ll keep moving forward.”

What do you find most unsettling or stressful?  “So many things! Travelling and airports…. Flying is okay, but it’s the airport for some reason. Everybody is coming and going. It’s a very hectic place, and I’m sensitive to that. I find pressure stressful too—the pressure to be great, to communicate well and to be a great person.”

Do any of those pressures come from your childhood, do you think? “My childhood was pretty normal. I lived with my parents, who are still together, and my sister. We were a very balanced suburban family. I played sports, I sang and I played piano. I got to do what I wanted to do. I got good grades at school and had lots of friends, but it was still pretty stressful. I was a very obsessive and somewhat compulsive child—even at five years old! I had to have my socks at the same length. I kept all my toys organized.”

Have you ever had any counselling? “I have a therapist, and I read a lot. I’m very interested in Buddhism as a teaching tool; I think the Buddhist philosophy is really wonderful. I try to live in the moment. I hate the idea of living in the future because it’s just fantasy, and, for me, fears come from fantasy. You can project your fears into a fantasy that would never happen. That’s not a positive way to think. It’s important to seize the day because we don’t know what could happen in 10 minutes even. I mean, we will probably still be here, but, you know, maybe there could be a nuclear war!”

That’s a rather dark vision of the world. “We are born alone, and we die alone. You have to some- times come to terms with the facts. You can’t look to a man or anyone else to make you happy. That’s just not the answer, and I understand that now. Maybe in a year I’ll be on the floor crying hysterically about all this, but at least I’m able to talk about it. It is something I’ve experienced a little bit in my 20s. When I’m 40, I’ll see how I feel, but who really knows? I hope we’re still alive in 10 years. I hope to have three lovely children by then too.”

Do you use acting to work through any of your fears? “When I’m acting, it’s a different part of me doing it. I’m fearless when I’m acting, but I’m not in real life. Nobody is completely fearless, or else you’d be a sociopath! When I’m acting, I’m stronger and there are no restraints—I’m free to do whatever, to play whoever, to be whoever. It’s actually an escape for me because I can jump into that world and then come back to reality.”

Which of your films is your favourite? “Jennifer’s Body! I’m so proud of it. My character is super- anxious, honest and stuck. It felt like I was playing myself!”

Is fame a challenge for you? “No…I mean, yes. There have been times in my life when I’ve been more concerned about it than I am now. Getting used to fame is so unnatural. It has its downside, but when you are not being hassled, the idea of being famous is good. I have fans I’ve grown up with; that’s a wonderful thing, and it translates to other things, to opportunities. But sometimes you get hunted, and that’s the downside. Fame can be terrifying and uncomfortable.”

What is your recipe for happiness? “My dog, Finn, and my farm. I’ve got six chickens, three horses, a cow and a baby donkey. I also feel happy being with my sister, her husband and my friends. And I’m happy when I’m not in a loud bar! I like to have dinner, a glass of wine or cocktails and a whisky at home.”

How was collaborating with Givenchy for its new fragrance, Live Irrésistible? “It was great and so much fun. Matthew, the film director, had really good ideas. He’s eccentric and animated, and he seemed very excited about it. I absorbed all that, and it was really fun to be, like, an American girl in Paris and capture this moment. We also had kittens on-set, so it felt like it was tailored just for me.”

What’s next for you? “I’m looking forward to start- ing a movie [The Last Word] in L.A. with Shirley MacLaine. It’s a film about a friendship, and it’s going to be intense and awesome. I also have to go to Mexico City to shoot another movie, American Express, which is so at the opposite end of the scale. It’s about drugs, and it’s a comedy—sort of! It’s a big movie with Charlize Theron, David Oyelowo, Joel Edgerton and Viggo Mortensen.”

You’re involved in the I AM THAT GIRL cause. Can you tell us about it? “They don’t necessarily talk about it like this, but to me it’s like New Age Girl Guides. There’s a leader in each region and a group of girls, and every week they get together and talk about everything. It’s a safe space for girls to empower each other and be honest, open and vulnerable. It’s so positive and empowering. It helps a lot of girls feel like they belong somewhere. High school is hard, and college is hard; being a woman, at any age, can be hard because there is a lot of insecurity and competition.”