Alicia Keys is back on track with a new outlook on love, career and the meaning of life. 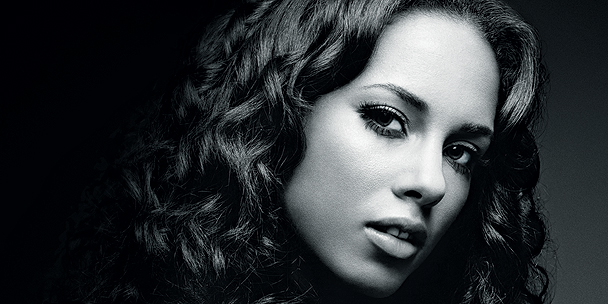 The best and worst year of her life
In the liner notes for her chart-topping new album, As I Am, Alicia Keys doles out the requisite thank yous to friends, family and collaborators. She also makes an unexpected statement about the period in which the record was produced: “This year…how can I explain it? It has simultaneously been the best and worst of my life.” So, can she explain it?

“It’s tough to nail down in a quick, neat package,” says the 28-year-old singer-songwriter during an interview on the eve of her performance at the American Music Awards. “I can definitely say that I was forced to learn about myself and the type of woman that I wanted to be. There comes a time in everyone’s life when they realize they’re following other people’s good judgments. At that point, you have to stand up and make your own choices.”

It’s a surprising admission, since one of the defining aspects of Keys’ career thus far has been her almost preternatural sense of self-possession. Her Grammy-winning 2001 debut, Songs in A Minor, was notable not only for its abundance of complex yet radio-friendly compositions (all written or co-written by the then-21-year-old Keys) but also for its creator’s beyond-her-years bearing. Whereas so many of her pop-starlet contemporaries suggested label-made creations, Keys struck chords of authenticity as naturally as she elicited melodies from her keyboard. She was poised but not posed. Like her music and her lyrics, her persona seemed to be her own.

But six years and two successful albums later, the pressures of stardom started bearing down on the singer’s fragile frame. Onstage or on disc, Keys sounded as empowered as ever, but behind the scenes she was struggling to assert herself. “I’d been touring so much and I was just over-exhausted from the whole process,” she says. “I wasn’t being clear about what was bothering me and the things that were bringing me heartache. Sometimes you try to ignore them, but it comes to a point where you can’t.”

Her new album
As I Am is the sound of confidence renewed. Her triumphant first single, “No One” — which could be caught blaring out of every other car stereo on its release last September — is an upbeat number with a defiant singalong refrain: “No one can get in the way of what I’m feeling.” Old-school Motown grooves power “Wreckless Love” and the infectious “Teenage Love Affair,” which has rightly been compared to the bubbly pop of the Jackson 5. Asked if the Motown sound was a guiding influence on the album, Keys implies that its presence runs deeper than mere stylistic homage. “It’s a part of me,” she says. “It’s what I connect to, what I relate to.”This issue of personal expression is especially pertinent given the calibre of collaborators assembled for the record, including ex-4 Non Blondes member Linda Perry, who has penned hits for the likes of Gwen Stefani, Pink and Christina Aguilera. Did Keys have any difficulty making her creative voice heard in the studio? “No,” she says. “It’s not difficult. Either you connect with the person or you don’t. Linda Perry and I connected incredibly well. John Mayer [who co-wrote and performs on “Lesson Learned”] and I also clicked. I didn’t have to worry about asserting myself — my voice comes through.”

Personal life
She clams up a bit when asked about another close collaborator-producer, Kerry “Krucial” Brothers, long rumoured to be the singer’s boyfriend. “I’ve never confirmed that we’re together, and I never will,” she begins, choosing her words carefully. “Obviously, [Kerry and I] are very close, dating back to the first album. When you have a great friendship with somebody, there are always ups and downs and ins and outs, but they enhance the working relationship. It makes it more real and honest. You can’t hide from somebody who knows you so well.”

Keys knows a little something about hiding; she has never been shy as a writer or performer, but there has always been a guarded quality to her interviews — and she admits as much. “That’s one of the things I learned this year,” she says. “Doing interviews, I was private to the point where I was desensitizing myself to my own emotions. It’s funny because I’m a very emotional songwriter and a very emotional woman, so it’s weird that I would be so emotionless in interviews. I did it to protect myself: I feel like if you let people in, they take advantage of it and abuse it. Now there are some things I still won’t talk about — things that are nobody’s business — but otherwise I have made a conscious decision to be more open, more honest and more verbal about myself.”

Her work outside of music
One thing that Keys is happy to talk about is her philanthropic work. The CD jacket for As I Am contains an ad for Keep a Child Alive, a non-profit organization that delivers lifesaving AIDS medicines to children and families with HIV/AIDS in Africa, and Keys has visited the continent as an ambassador for the group. “I do it because I want to and because there’s a real way that a large group of people can be helped,” she says. “It gives my life a greater purpose.” Keys will also dish on her recent move into movies — and not because her performances in mainstream fare like Smokin’ Aces (in which she convincingly portrays a lesbian hit woman) and The Nanny Diaries (in which she plays Scarlett Johansson’s character’s best friend) have have her dreaming of becoming a crossover star. The big news is what she’s doing behind the camera. “I set up my own production company through Disney,” she says. “It’s an incredible opportunity. I have my own unique perspective on the world, and my goal is to find stories that can spread that kind of diverse vision.”It’s a full plate, yet Keys yearns to “keep things simple.” “It’s hard to be everyone for everyone, everywhere. But it’s also a beautiful thing because, hey, what if you weren’t wanted anywhere at all! I just have to be conscious of everything I’ve agreed to do because I want to be fresh. So, sometimes less really is more.”

There’s something else Keys wants to give her full attention to: starting a family. And that’s why it will probably have to wait. “I have so many things I want to accomplish,” she says. “A family is probably the most important thing in life, period. I want to do it when I can give all of me. It’ll happen. It’s my future. But right now, I’m learning a lot about myself, and I don’t want to rush it.”

Alicia’s faves
Lyric you love most? “From ‘Lesson Learned.’ It’s on the bridge. It says: ‘A life perfect ain’t perfect if you don’t know what the struggle’s for / Falling down ain’t falling down if you don’t cry when you hit the floor.’”

New fave tune? “That’s hard! Maybe ‘How to Save a Life’ by The Fray. That’s a great song!”

Stress buster? “I love to get massages — that’s where I get into my little comfort zone. I can go there to relax, be quiet and get pampered.”

TV addictions? “I’m not really up on television right now. Last year, I was totally addicted to Rome on HBO, but sadly it’s finished now.”

Last time you looked fab? “At our release party, I had this deep purple Herve Leger dress that made me feel really good. I was able to let my hair down — and, boy, did I let it down!”