Talking going #nomakeup on the big screen with this rising star. 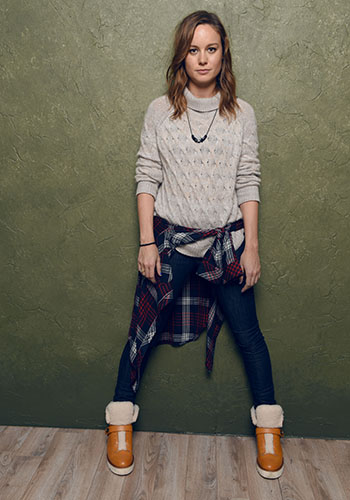 Of all the things you im­agine you might talk about with one of the year’s most-buzzed-about young actresses, the beauty of a clogged pore isn’t up there. But here we are, Brie Larson and I, in a hotel room on a gloomy day during the Toronto International Film Festival (TIFF), getting excited about breakouts.

“I actually get a weird rush out of it,” explains 26-year-old Larson on how it felt to see her bare face on the big screen in the film Room, which premiered at TIFF. “I get excited about seeing my face without makeup, as big as that theatre screen is. I think it’s a beautiful thing. I could have done all the same preparation, but if I had done that performance wearing foundation, I don’t think anybody would have believed a second of it.”

The California native has a point: A character who’s meant to have been held by her kidnapper in a shed for years but somehow has just the right natural flush would have made the Canadian film less indie authentic, more Lifetime drama.

“That’s not what this movie is about, and it’s not what I’m about personally,” says Larson. “I’m way more interested in ‘Let’s see ourselves!’ I’m more comfortable without makeup.” A quick raised eyebrow indicates that, yes, she’s aware of the fact that we’re doing this interview with her in a full face of makeup, and, yes, she totally sees the irony. “I think this concept of perfection is slowly killing us,” she elaborates. “I’m never going to be; once you release yourself from that confine, life is so much more fun!”

Larson wasn’t always comfortable in her own skin—in fact, she says she used to be the girl who wouldn’t walk the dog without a full face of makeup. “Then one day I woke up and did the math,” she recalls. “I was going to lose years of my life getting ready for something that was already happening.”

It’s a realization that has parallels in her career: After films like 21 Jump Street and Don Jon, Larson has finally hit her stride with Room. It’s an emotionally charged film that won critical acclaim at TIFF and generated major awards talk for Larson’s performance.

“I’m very interested in the complexities inside of us, so if I’d stuck to being really obsessed with clothes and makeup, maybe I wouldn’t have taken the time to look deeper because I would be contouring for the rest of my life!”

3 incredible quotes every woman should hear from Malala Yousafzai

Our exclusive interview with Kylie Jenner