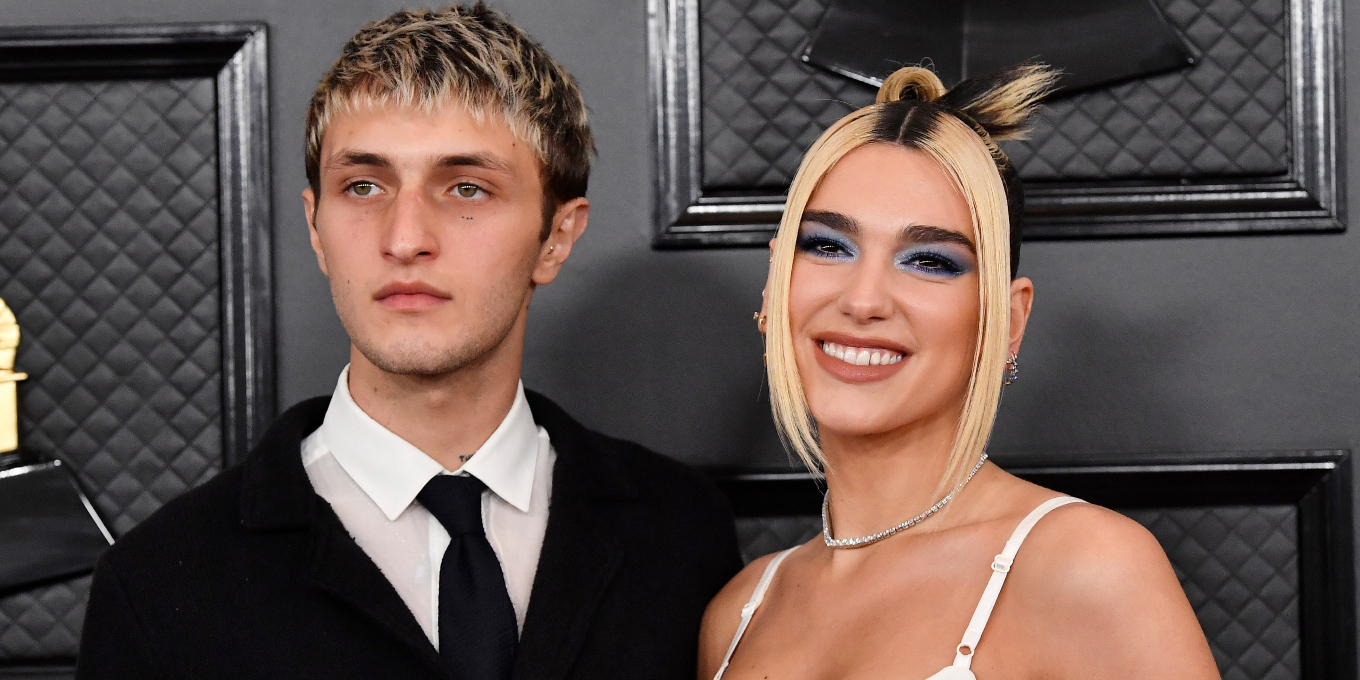 British superstar Dua Lipa, 25, is one of the world’s biggest pop artists, with her mega-hit song “Don’t Start Now,” reaching number the two spot on the Hot 100 in the U.S. and U.K. And off-stage, the pop star is in a serious relationship of almost two years with model Anwar Hadid, 21.

Initially, Lipa kept her relationship private but now shares pictures of her and Hadid with her 63.6 million followers on Instagram. Hadid is no stranger to celebrity himself: He comes from a famous family and is the younger brother of supermodel sisters, Bella and Gigi.

Hadid and Lipa first sparked dating rumors shortly after Lipa’s split from celebrity chef Isaac Carew, who was her boyfriend for nearly five years. A video of Lipa and Hadid celebrating his birthday together in June 2019 first fueled romance speculation.

From then on, the couple has shown PDA in photos, attended each other’s family gatherings, and post regularly about their love for each other. Here is everything we know about the two’s history, from the first time the couple met to Hadid’s post-Grammy celebration for Lipa.

Sources told TMZ in early June that Hadid “reached out” to Lipa for a date after he learned she had split from her ex-boyfriend Isaac Carew. Hadid was a fan of the British star’s music prior to their first date, and she was a fan of his own album Bleach.

Later in the month, a video emerged of Lipa attending Hadid’s 20th birthday party. The Sun posted the video of Lipa along Hadid’s side. According to the British tabloid, Lipa and Hadid had gone a “string of dates” in Malibu before Lipa’s appearance at his birthday party.

The following month, Lipa and Hadid were spotted at the 2019 Nordoff Robbins O2 Silver Clef Awards. Both appeared on the red carpet alone but were photographed together inside the event. 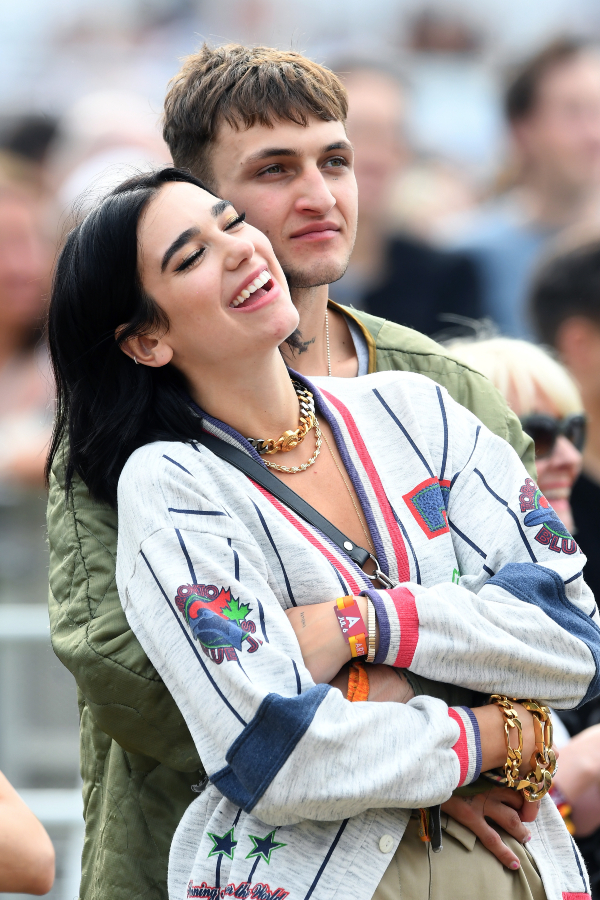 After their public PDA sighting, the model supported his rumored girlfriend at her Amazon Prime Day performance. People reported Hadid was accompanied by his sister, Bella, as they both attended the show. Later that night, Lipa was photographed with Hadid as she held onto his arm and walked through New York City. Despite dating reports, the two did not confirm their relationship at the time.

After months of being seen together, Lipa and Hadid went Instagram official. The twosome was featured in a photo gallery that Lipa posted on her Instagram. The duo posed for a quick picture as Hadid held up a peace sign. The Hadid family quickly chimed in on Lipa’s post. Gigi Hadid commented “Cuteness.” Yolanda Hadid, Anwar’s mother, wrote a “❤️.”

The Sun  reported that the couple moved in together after a few months of dating. A source told the outlet that “Dua and Anwar are spending all of their time together, so it just made sense for them.”

The source added, “Once she comes back with new music, she will spend more time in New York, so it’s good for her to have a base there, and it makes sense to him because a lot of his family live[s] there.”

Following their big move, Lipa and Hadid made an appearance at the Burberry Spring/Summer show in London. Lipa wore a black lace mini dress with an oversized striped sweater paired with baby blue suede block heels. Along her side, Hadid wore a Burberry signature plaid teddy coat with matching Burberry plaid sneakers. 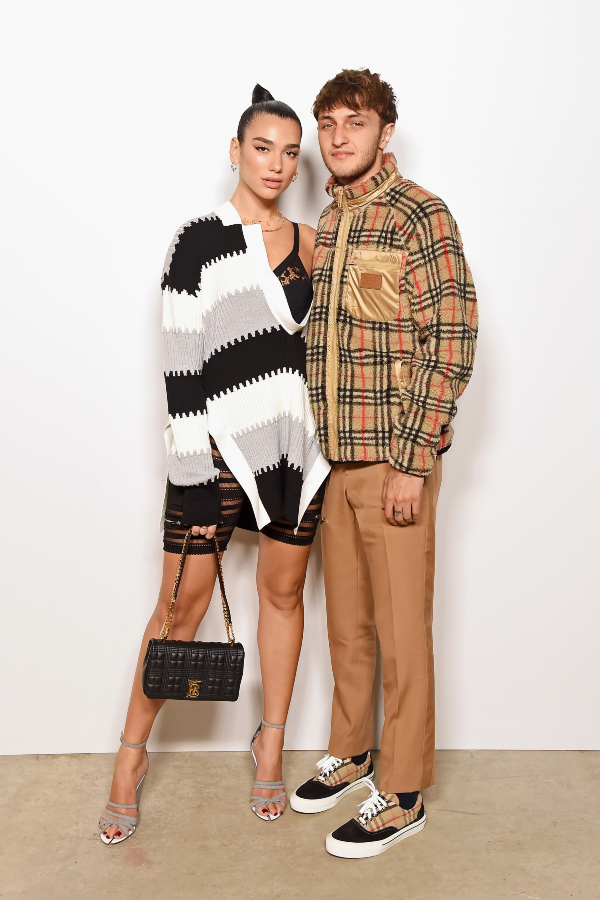 On November 4, the couple attended the MTV Europe Music Awards in Seville, Spain. Hadid cheered on his girlfriend as she performed her hit song “Don’t Start Now.” They were seen kissing and smiling at each other throughout the night. 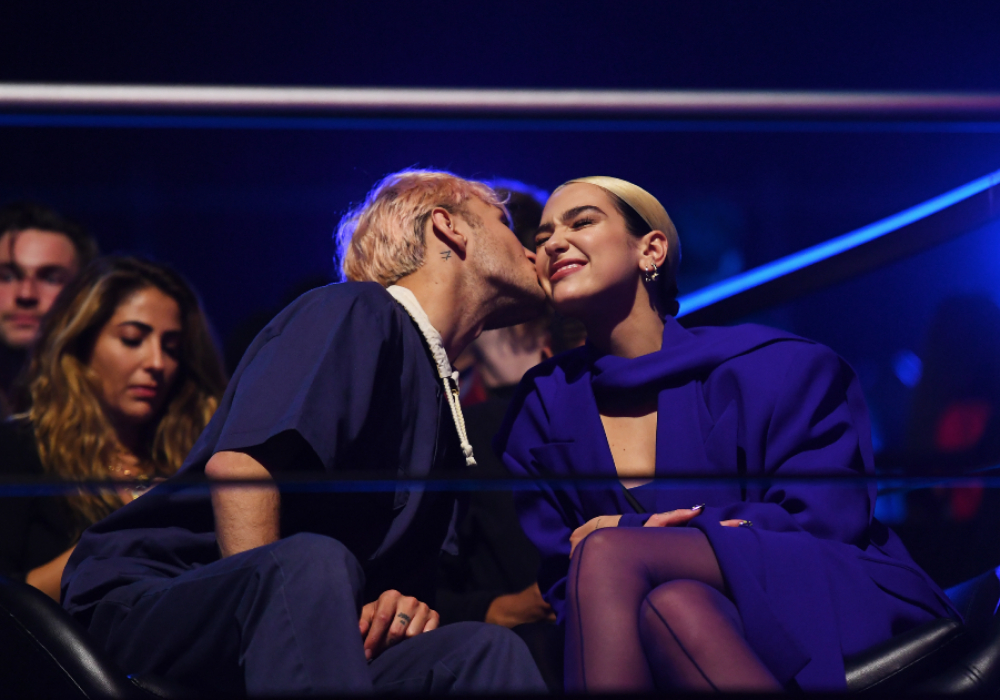 Later that month, Lipa and Hadid made their red carpet debut at the 47th American Music Awards. Lipa wore a hot pink Miu Miu gown paired with Bvlgari jewelry. Hadid was more casual in a black suit with an Iron Maiden graphic tee. They shared a kiss for the cameras, publicly confirming their relationship. 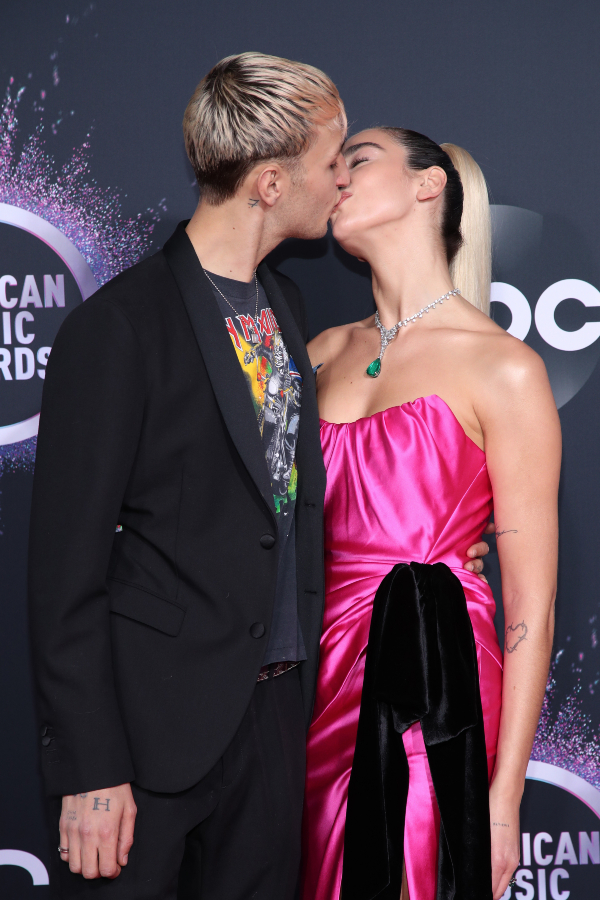 The following month, Lipa and Hadid flew to Miami to celebrate New Year’s Day. Lipa posted pictures of her New Year’s Eve house glam party. She was dressed in a glittery silver mini dress paired with sparkly pumps. The gallery of photos featured her and Hadid sharing a New Year’s kiss.

The celebrity couple attended the 62nd Grammy Awards. They walked the red carpet hand-in-hand, looking in love. The two complemented each other as Lipa wore a ’90s-inspired Alexandra Wang ensemble of a white corset top paired with a mid-maxi ivory skirt, and Hadid wore a black and white suit. The Future Nostalgia artist took home the Best New Artist award, along with the Best Dance Recording for “Electricity.” 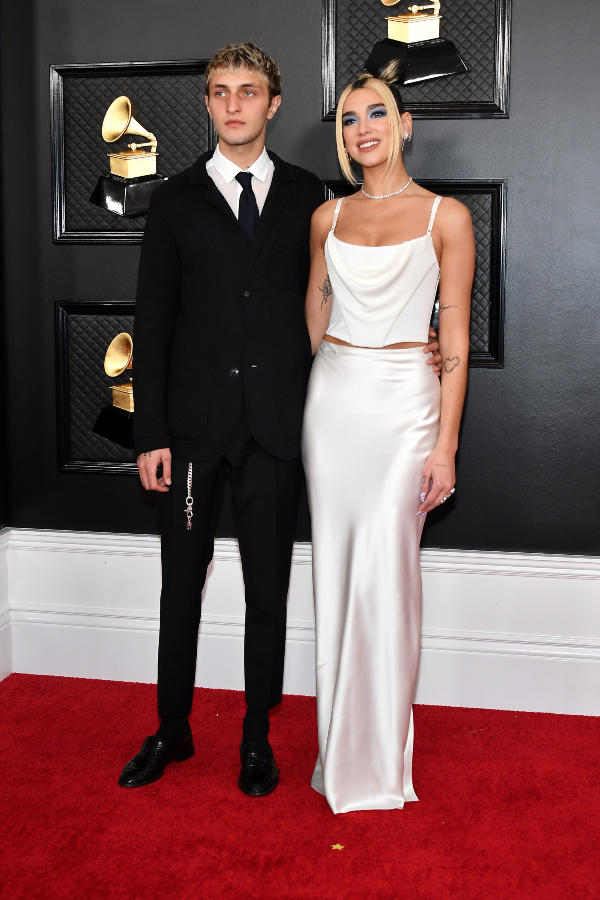 Hadid and Lipa celebrated their one-year anniversary in June 2020. The singer took to Instagram and shared a collection of her favorite photos of the pair. “Nothing sweeter than 365 days joint at the hip with you ❤️,” she captioned the post.

Lipa also shared a picture of a bouquet on her Instagram story. “1 year ago today we went on our first date… crazy how the best times fly by so quick @anwarhadid I love you,” she wrote.

After initially quarantining in London, Lipa and Hadid decided to take a vacation abroad (a little controversially, as the coronavirus pandemic was very much ongoing). The pair took traveled to St. Lucia for the Fourth of July. Lipa shared a collection of vacation photos on Instagram featuring gorgeous scenery, a four-leaved clover, and a video of Hadid enjoying a St. Lucia rain shower.

After vacation, the two went back to the U.S. to celebrate Gigi’s pregnancy news and close friend Leah McCarthy’s birthday. Yolanda Hadid posted photos of her hugging her son, Anwar, and a picture of Lipa on Anwar’s back. “❤️My tribe complete ✅ #Family,” she captioned the post.

The couple adopted an adorable dog together. The puppy, who they named Dexter, made it on Lipa’s Instagram feed. She introduced him to her followers, captioning his debut photo, “our tiny best friend Dexter!!! Thank you @thelabellefoundation HE’S PERFECT.”

Lipa had a merry Christmas with Hadid’s family. Lipa took to Instagram and posted a gallery of holiday fun that included photos of her and her boyfriend, gingerbread houses they made, and the Hadid sisters and Yolanda wearing goofy holiday glasses.

Lipa covered Rolling Stone. In her interview with the outlet, she spoke about her relationship with Hadid and how he influenced her second studio album Future Nostalgia. Lipa mentioned she is more comfortable in her relationship with Anwar than her past ones. “When I was creating [my] first album, a lot of what was going on in my life was about heartbreak. This time around, I was feeling so happy, and things were going so well; I was like, ‘Okay, I need to be able to portray this feeling in a way that doesn’t feel cheesy to me,’” the singer told the magazine.

In her February British Vogue cover story, Lipa discussed her romance with her boyfriend and how much they are willing to share on social media. “We have all these incredible memories and experiences, and if there’s something that we want to share, then okay, that’s fun,” Lipa said. She added that beyond what they post on Instagram, the couple is very private: “We’ll only show you as much as we want you to see. It’s a little bit of give and take, trying to find the right balance of being so excited and being in love, and wanting to share that with the people around me, but at the same time not wanting to put too much out there. I want to be able to just be happy in this relationship without having other people’s opinions.”

On the night of the 2021 Grammys, Lipa performed her hit songs, “Don’t Start Now” and “Levitating,” featuring Da Baby. Lipa also won Pop Vocal Album for Future Nostalgia. Due to COVID-19 restrictions, Hadid did not accompany the singer on her big night.

But he still celebrated with her. Following her win, Lipa shared a gallery of photos from her post-Grammy celebration that Hadid planned for her. “All the love in da world waiting 4 me my angel boy,” the star wrote.

Lipa and Hadid signaled their romance was still going strong as they made a rare coffee run together in Los Angeles. The pop star wore a graphic tee with a red mask as she clung to Hadid, who wore a black tank top. He carried their Starbucks drinks. The appearance marked the first time the couple had been seen together in months.

Ahead of their two-year anniversary later in June, the couple was spotted hand-in-hand in Santa Monica for dinner. Lipa wore a white tank top with a red leather belted mini skirt paired with knee-high leather boots. Hadid kept things casual as he wore a graphic tee with a black cable knot cardigan over the top with jeans and sneakers.

On June 13, Lipa took to her Instagram story to celebrate her and Hadid’s two-year anniversary. She posted a picture of her beau and their dog, Dexter, saying, “I love you @anwarspc happiii happiiii 2 years!! ❤️ ❤️ ❤️ ❤️.” 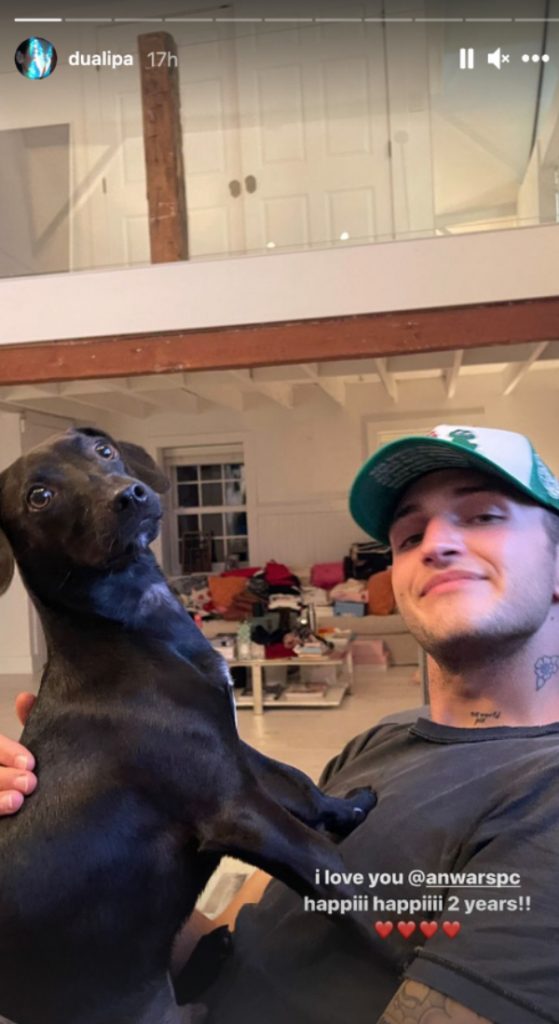 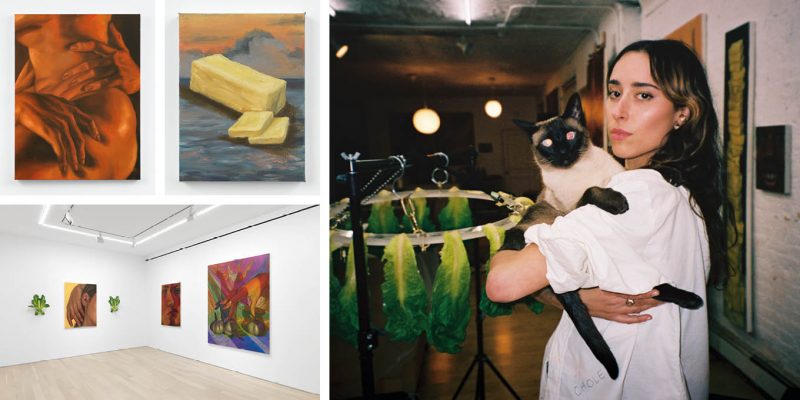