5 things you need to know about Mø

A primer on the next big Scandinavian singing sensation 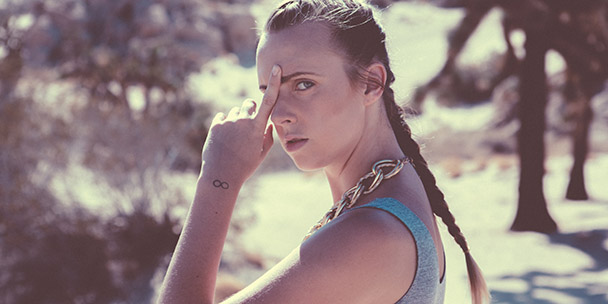 It’s pronounced “moo,” and it means “virgin” in Old Norse. Also, her real name is Karen Marie Ørsted, and the addictive pop on her album, No Mythologies to Follow, sounds like the love child of Sam Smith and Grimes (which is why we asked her to provide the soundtrack for our Dior-collab videos). What else do you need to know about the next big Dane in pop?

You already know her. (you just don’t know it.)
Mø is huge in her native Denmark (Breakthrough Artist of the Year at the 2014 Danish Music Awards was just one of three awards she won that night), but you most likely know her for singing the swaggering hook on Iggy Azalea’s Billboard Top 40 hit “Beg for It.”

She’s no ingenue, and that’s a good thing.
Mø is 26, which is like 65 in pop-star years, and she brings a hard-won sense of self to her new fame. “In the beginning, people were saying ‘This is so hot now; you should do it’ and I was like ‘Maybe.’ But I’ve learned I’m fucking terrible at playing a role. If I know it’s not me and I try it anyway, it always fails. I’m bad at faking it!” She has also been around long enough to realize how unlikely her success is: “I never thought I would be rich and famous. I’ve always known that this is an industry where not a lot of people make it.” (Her “backup plan” was “to be an artist, fundraising and living off what [she] can get.”)

Her favourite Spice Girl is Mel C.
The Spice Girls were Mø’s first musical love. When she got a little older, she moved on to “strong, edgy” role models like Kim Gordon and Karen O and actually spent 10 years on the punk scene, but her goal remained the same: to make music. “I’ve been dreaming about it since I was seven. You don’t dare say your dreams out loud because you’re afraid to fail, but, yeah, I want to take over the world!”

She makes intense eye contact.
Mø writes songs as therapy (mostly about “feeling as confused now as when [she] was 15”), so her lyrics aren’t short on drama. “Onstage, I dig into the feelings and go into a more primal, basic state instead of the controlled, social person of daily life. I love looking into the eyes of a stranger and singing right to them.”

The awards and accolades are gravy.
Mø says her biggest achievement is being a decent human being: “When I’ve been working hard and then I go and do a good job in a session, and I’m kind to people even though I’m fucking tired—that’s when I’m like ‘Karen, you did good there.’”