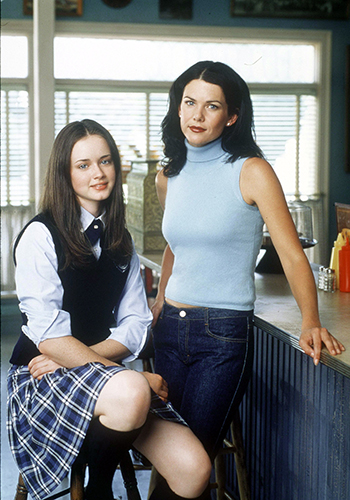 So it’s not 99 percent confirmed yet, but rumours of a Netflix reboot of every 90’s girl’s favourite dramedy, with the original cast, have a lot of heft to them, thanks to a tweet by Lauren Graham (aka Lorelei Gilmore) last night, saying she can’t confirm, but she can’t deny the news.

In celebration, hopped up on Twizzlers and grossly over-caffeinated, we’ve prepared this list of 5 plot points we would like to see covered in this reboot, which you should read aloud at a break-neck pace.

1. Return of the Jess

Assuming this reboot takes into account time passed (show ended in 2007, so it’ll be 8 years on), the bookstore/cafe/beatnik hangout Jess was running in NYC has folded (thanks Amazon), and he’s back in Stars Hollow teaching English at the local high school.

2. Return of the Rory

…which is perfect timing because Rory is also back in Stars Hollow after years as a succssful journalist at the New York Times. She’s back as editor-in-chief of the local paper, tasked with helping it transition into the digital age before it fails (thanks internet). That or she founded a Gawker-type website which just got bought for billions of dollars.

3. Luke and Lorelei are happy, end of story

Frankly, we don’t have the emotional energy for another 7 years of “will they, won’t they”. I’m sure plenty of narrative tension can be found in C plots about finally getting rid of Lorelei’s bandana collection from Season 1.

The third star of the show was always the improbably quaint town the Gilmore’s lived in, but it could be fun to see how the town is coping with the encroaching modern world. What will Luke and his diner do when Starbucks opens up down the road? How will Dosey’s market react to the new demands for organic food from the hipsters who’ve retired to the country?

5. Lots and lots of Suki

Melissa McCarthy better be on board.

18 dresses Kate Middleton should wear to her first state banquet