5 reasons to heart HAIM (even more than you already do)

Baby Haim dishes on the secrets of The Wolfpack 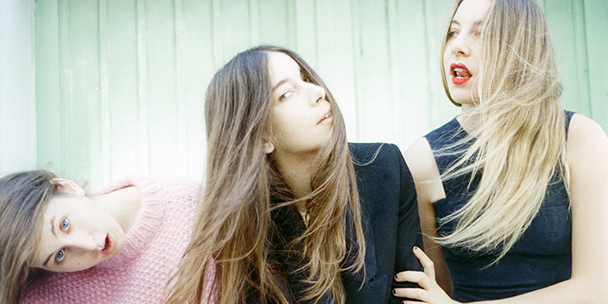 Currently in the early stages of writing a follow-up to Days Are Gone, Grammy-nominated Haim is music’s hottest sister act. Fresh off the road from touring, Alana, 23, the baby of the group, called us from her L.A. pad to share secrets from inside “the wolf pack.”

The origins of the wolf pack
“My oldest sister, Este, is why we became so close. She introduced me and [my sister] Danielle to the L.A. music scene. They got me my first fake ID so I could go out with them. We’d go to the Echo, the Silverlake Lounge and the Satellite; we were this wolf pack that was always together.”

How the wolf pack stays together
“You should ask my parents how they raised us. They totally should write a parenting book. To this day I’m like, ‘Can you raise my kids? I don’t know what you did to make us love each other so much!’”

Where the wolf pack eats
“Tacos and burritos literally fuel our lives. There’s this place [in L.A.] called Taco Zone—it’s like a roach coach and it looks really scary; you wonder if you’re making the right decision, but then you get the tacos and you’re like, ‘Completely the right decision.’”

What the wolf pack fears
“Being charged for a crime that we didn’t commit and going to jail is a weird fear that my sisters and I have.”

Why the wolf pack is a powerful force
“When all three of us go out together, something crazy is going to happen—something where we think ‘How did we get here?’ We went to the Saturday Night Live 40th reunion and I didn’t see my sisters at the beginning of the party because we got separated, and then the second we got together, Prince showed up. We’re like a weird witchy wolf pack that conjured up Prince in a purple cloud.”