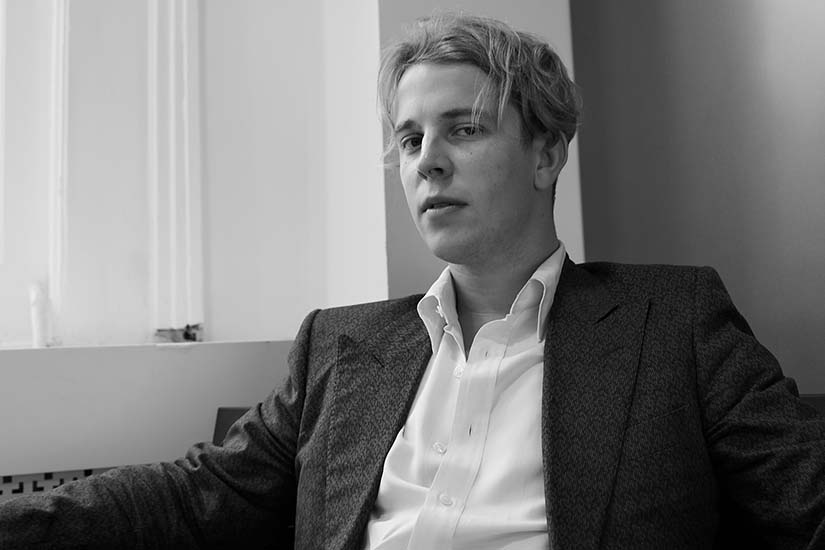 UK singer-songwriter-deep soul Tom Odell was recently in Toronto to play an intimate gig at Saks 5th Avenue, and in between sound check and performance, we grabbed the soft-spoken 25 year old for a quick shoot (see above) and a chat.

ELLE Canada: You released your sophmore album, Wrong Crowd, a little while back. This is meant in the best possible way, but it has such an Elton John vibe to it.

Tom Odell: Why, thank you! I’m a huge fan of Elton and I grew up listening to his music. What inspired me to write songs was I had an Elton John song book on my piano when I was like 12 years old, actually.

EC: One of the first songs I ever learned to play on the piano was ‘Candle in the Wind’…

TO: TO: Yeah, it’s a beautiful song. I like the alternative version of that song. It’s just acoustic guitar and lead vocals and backup vocals. It’s like on some deluxe album he put out in 2000 or something, but it’s a great version.

EC: You’ve probably done a ton of press for the album at this point. Is there a question you’re sick of answering?

TO: ‘Do you have any rituals before you go on stage?’ It’s just bizarre because I guess if I had a more interesting response I’d find the question more interesting, but to be frank, my ritual before I go on stage is very sort of dull. You know, it’s like, I try not to think about the show as much as possible. I might read a book or watch something on my laptop or talk to the band, but there’s really nothing. I think they almost want that, like I sort of lay a rug down on the floor and chant ‘white elephant’ six times and look for the Northern star and do six claps towards it before I walk on stage. But there’s nothing like that, unfortunately.

EC: Are nerves still a thing for you?

TO: I do quite often pace, yeah, I pace whichever room I’m in.

EC: In the direction of the North star?

TO: [Laughs] Yeah…there’s a lot of pacing that goes on. It’s interesting in you asking me what’s the question that I get asked the most, I’ve actually probably given the best answer I’ve ever given towards it.

EC: Is there anything you’re waiting for someone to ask you?

TO:  I’m trying to think what I would ask someone who’s made an album. I met Elton John and he’s become a friend of mine. The first time I met him, I asked him, I grilled him about making those early albums, and I guess the thing well I didn’t ask him directly, but the thing I wanted to know was how hard was it to do, like how difficult was it to make that album. Was it…did it just happen or did it…you know, did it take everything you ever had? You know I got the feeling from his responses is that it took a lot. I guess that’s what I would ask, is how hard was it? Did it really take something out of you?

EC: Well, Tom – how hard was it to make this album?

EC: What does that actually look like in daily life? Like, is it long walks alone in the woods…

TO: No, no. I like the idea of that, but it’s, no. it’s being honest with yourself constantly and it does take sitting at the piano for long hours. But I think the real struggle is when you have those moments when every bone in your body is telling you to give up on that song, but you keep going, and eventually some other idea comes along and then you’re away, but you’ve got to be there, you know? You can’t control when inspiration hits but you’ve got to be around when it does, you’ve got to be sat there, ready.

EC: You’ve made a name writing songs about heartbreak. Have you ever tried to write happier music?

TO: Writing happy songs is fucking difficult. That Pharell Williams song ‘Happy’ is such a masterpiece because in order to write something about that and make it interesting and give it a depth is so hard. You know, sadness is just immediately more rich and it’s a feeling which sinks a bit deeper. So in that respect it’s just easier to get there, easier to write about. But I like to think that my songs aren’t…whilst they probably draw from sadness that I like to think there’s a hope in there. And I think that’s what I’m always drawn to it’s the sad songs with hope. Some sort of light at the end of the tunnel.

Kylie Jenner’s Pregnancy Timeline: From Maternity Looks to Due Date