Canadian ballerina Sonia Rodriguez is in her prime

This dance superstar talks her new role in Sleeping Beauty, never giving up, and why these are her best years yet. 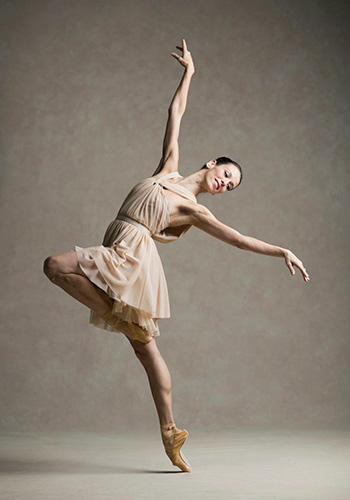 At 42, Sonia Rodriguez—principal dancer, wife to championship skater Kurt Browning and mother of two—isn’t showing any signs of stopping. On the eve of her 25th anniversary with the National Ballet of Canada, and as she preps for her reprisal role as Princess Aurora in The Sleeping Beauty (June 10 to 20, national.ballet.ca), Rodriguez shares what she has learned along the way.

As a principal ballerina, what does your day typically look like?
Well, I’m usually just trying to get my kids out of the house on time! So in the morning I’m scurrying around to get dressed, have breakfast, prepare lunches and get out the door by 8am. I’m at the studio by 9am so I can have some time to myself before class starts at 10am, then we’re in rehearsal all day. Evenings, I usually rush home, make some dinner and try to have a little quality time with my family!

How has it been being a mother and a ballet dancer, both of which are extremely demanding professions?
It’s not an easy thing to balance a family and full time job – for any woman – and it’s definitely stressful at times. For me, the key is not blend the two. When I’m at work, I just focus on my dancing. And when I get home, it’s all about family. When I was younger there was no separation at all. After dancing all day I would go home and watch videos about technique and read about the industry. I don’t have that anymore; whatever I have to do that’s work related I do in the studio now.

How are you finding the separation?
It puts a lot of things in perspective! Having a family rearranges all the things that you thought were important. As a mom you’re always on call, so it’s not realistic that I’m going to get work done at home, but at the same time, it’s nice to feel needed, so I wouldn’t want to distract myself with work.

What initially drew you to ballet? Do you think people are born ballet dancers?
No, I don’t think so. It’s too specific. There were different aspects to ballet that initially attracted me, but mostly it was the ability to become someone else. It was an outlet for me, to be able step outside of myself and feel uninhibited. I was quite shy as a kid and when I was dancing I found a sense of freedom that I still haven’t found anywhere else. When I was young I also flirted with acting, but with dance, not only could I inhabit someone by speaking, but my whole body could express the character, it just seemed so much fuller.

Were there any moments along the way where you wanted to stop?
I’ve spent 25 years as a professional dancer so I’m not going to say it’s always been a high. There have been highs and lows. And there were times when I second-guessed my choices and was filled with self-doubt – this was one of my lowest points. But eventually the fog lifted and I found a new sense of strength and love for ballet. And I’ve had many, many years after that. It’s a hard job when you spend the majority of your day looking in the mirror and looking for faults, and it’s hard sometimes to take a step back and look for what’s great.

Was this low period before or after you had children?
It was before! To be honest, having children was a very empowering thing for me, especially the first time around. After giving life, it just seemed like I could tackle anything. When you’re in a very small environment like ballet, things that aren’t really important can feel like mountains that you have to overcome. But taking that step back and seeing the big picture is what kids can do for you. Things just seemed easier after having children; I felt like I could do anything.

Do you feel like you became a better dancer?
I think so. I felt stronger as a person, and surer of who I was and how I saw myself. That gave me a lot of power to come back and continue to dance. I stopped letting others’ opinions affect me to the point where I didn’t trust myself. It also made me feel more uninhabited, which gave me a new sense of freedom that I had never experienced before.

What’s your favourite part of the process leading up to a performance?
I really love the rehearsal period, that’s when you’re discovering who you are as an artist and who your character is. So then, when you’re on stage, you can strip yourself of that analytical work and you can be in the moment. I don’t like to repeat things over and over, and that comes by knowing who I’m supposed to be so well that whatever reaction may happen, it’s always the right one. And I think for the audience, it’s a more truthful performance.

There seems to be this wonderful dichotomy in ballet, of complete rigidity giving way to complete freedom…
That comes with years of experience. That real sense of freedom didn’t come until later on in my career. It comes with knowing who are fully and not worrying about pleasing everyone else. When you’re younger, you’re constantly looking for approval and trying to please while on stage. You’re always asking yourself, ‘am I what they want me to be?’ instead of just trusting yourself.

I find it so interesting then that the norm is to have dancers retire at 30, when there is so much more that can come after…
As you age, magical things happen. My performances today are richer and fuller than when I started, not only for the audience but also for myself. I feel very fortunate that my body has held up – and touch wood – I hope it continues so I can enjoy the ride.