I Read 'Midnight Sun' So You Don't Have To 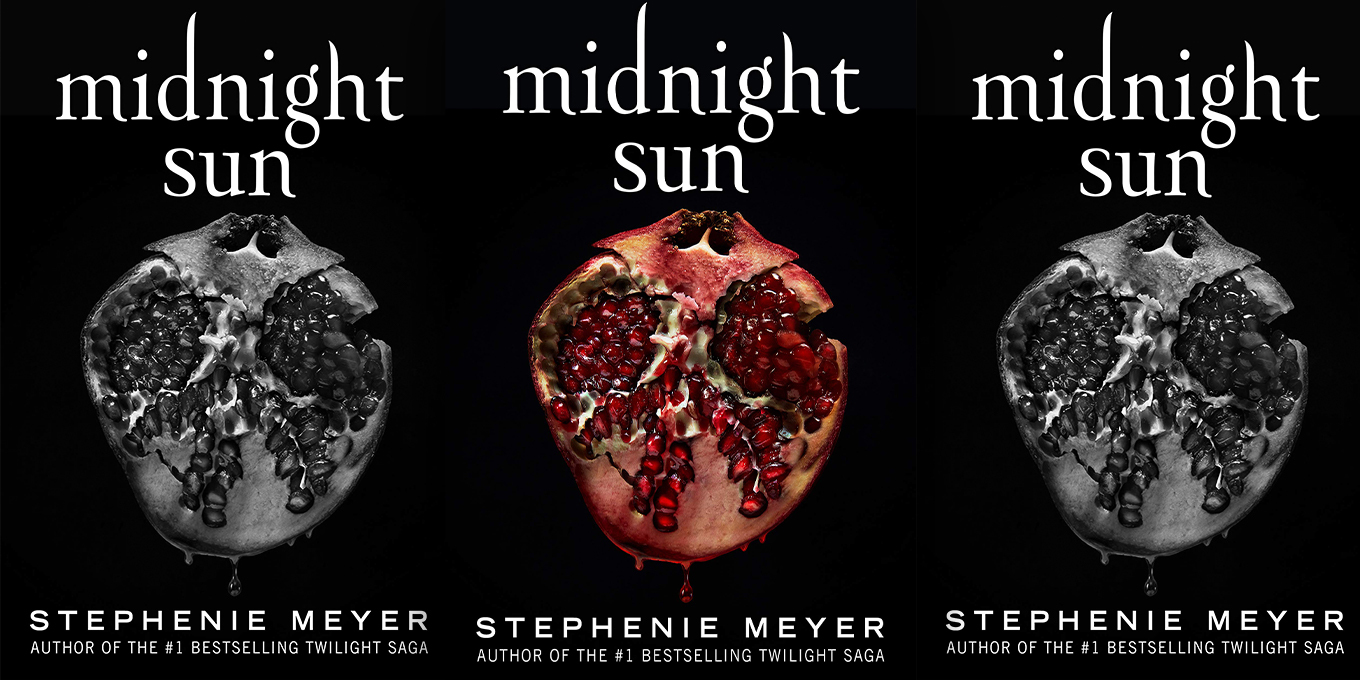 An important thing to know about me is that I’m a completionist. This is often to my own detriment – I will watch every episode of a TV show well past its prime just because I need to know how it eventually ends. So when Stephenie Meyer announced that she’d be publishing Midnight Sun, the long-teased companion novel to Twilight told from Edward’s perspective, I knew that I was going to read it, even though I had moved on from my middle-school obsession with the fantasy-romance saga quite some time ago.

When I received my copy of the book, I immediately noticed that it was significantly longer than Twilight. I was…puzzled: What could possibly account for a 160-page difference in length between the books that told the exact same story? I was about to find out, I guess. And so I returned to the familiar world of Forks.

Here are just some of the rambling thoughts that popped into my head while reading this book, broken down by page.

When Edward meets Bella and gets a whiff of “the sweetest blood [he’d] smelled in over 80 years,” he spends pages detailing how he would have to kill her – and everyone else in the room who would witness it. It’s disgusting, frankly, especially knowing that we are supposed to love him as Bella eventually does. Make no mistake: He can refer to himself as a monster as many times as he’d like (and, boy, does he) but this is, ultimately, not an anti-hero story. I finish the first chapter knowing I’m going to regret reading this book, but flip the page anyway.

In an attempt to thwart his murderous urges, Edward flees to the Denali coven, a group of female vampires who also don’t hunt humans. I sigh thinking about how much I’d rather be reading a book about them instead.

Now back in Forks, Emmett, one of Edward’s vampire brothers, tells Edward that it wouldn’t be the worst thing in the world if he ends up killing Bella because he’s so bloodthirsty. This is…a lot of murder talk.

Something that has quickly become annoying about this book is that Edward’s family communicates with him almost exclusively using his mind-reading power. Admittedly, this has its uses – vampire secrets, and all – but they do it even while in private. Please, just have a real conversation, I am begging you.

Edward begins his routine habit of spying on Bella while she sleeps. Obviously, this is a gross invasion of privacy – we’ve had this discussion on the internet before. But it’s the way that Meyer writes it that really reinforces how disturbing it is. First, Edward tries to rationalize it: Bella needs protection, he just wants to make sure he’s safe. Then he admits what he’s doing is wrong; he’s racked with guilt but just can’t stop himself. It’s like acknowledging it is supposed to make it okay for the reader. It doesn’t.

“I loved her,” Edward thinks while still lurking over a sleeping Bella. They’ve had, like, five conversations in total up until this point. I think we can slow things down a little, my guy.

Chapter six – when Edward decides he and Bella can have a friendly relationship – is home to a lot of fan-favourite lines from Twilight. There’s “I decided as long as I’m going to hell, I might as well do it thoroughly,” which Edward wryly tells Bella when he invites her to sit down with him at lunch. Later, it’s Edward dramatically trying to scare her off with the over-the-top “What if I’m not a superhero? What if I’m a bad guy?” (Run, Bella, run!) I remember enjoying this same banter back when I first read the book. Now, punctuated with Edward’s overly long and angsty thoughts, it drags. There’s a (dangerous) drinking game to be made of how often I roll my eyes reading this.

Bella and Edward listen to Debussy’s “Clair de Lune” together. I’ve already said all there is to say on this matter.

Yes, I know it’s a classic, but do people know that when they use Clair de Lune in their movie/TV show, an entire generation automatically thinks of Twilight?

Edward realizes that part of Rosalie’s dislike towards Bella is because she’s jealous that he never found her attractive. We’re supposed to believe that even though she is in a happy relationship with Emmett, and the two have lived as siblings together for even longer than that, she’s harbouring resentment over this? In a book where there is plenty to be offended about, this is near the top of the list.

Bella is almost attacked by some random men while out of town with friends. Edward, of course, is able to save her because he is stalking her. I realize, not for the first time, that this entire saga of books is just a series of events Bella needs saving from. It is dull and frustrating, especially from the perspective of a creepy man who keeps telling the girl he supposedly loves that she’s a target for trouble. Way to victim blame, Edward.

For what seems like the thousandth time, Edward hears the thoughts of a random woman who thinks he’s too hot for words. And yet, Meyer has apparently not run out of words to describe this alleged hotness for paragraphs at a time to the reader. I do know what Robert Pattinson looks like, thanks.

Edward confesses that he was stalking Bella and she smiles. I want to scream.

“What Bella wanted and what was best for Bella were two very separate things,” Edward thinks. And, granted, Bella makes some poor choices, but maybe let’s allow her to have some agency! The very next page, he emphasizes that things “must always be her choice” (remember, he’s a good guy, actually), but we know this isn’t true.

I should have kept a tally of how many times Edward observes Bella biting her lip. I hope she has a good lip balm.

“You don’t see yourself very clearly, you know,” Edward tells Bella during a moment of self-doubt. I preferred this message coming from One Direction.

They are watching Lorenzo’s Oil in their biology class, which isn’t actually important but does remind me of the excellent episode of movie podcast Blank Check that covered the film. May I recommend listening to it instead of reading this book?

Bella refers to the six-episode Pride and Prejudice miniseries starring Colin Firth, a movie, and I would really like to have a conversation with her explaining that TV is not movies and movies are not TV.

I’ve never really understood Edward’s agony about Bella seeing him in the sunlight for the first time – and getting to see it from his perspective doesn’t help clear things up at all. He’s acting as if he’s about to reveal the worst side of himself to her (somehow that is not the fact that he thinks about killing her) just because he’s going to…sparkle? I would suggest a rip-off-the-bandage approach here, which he does not take me up on.

Here it is, the most iconic line in possibly the entire franchise: “And so the lion fell in love with the lamb…” I am raising a metaphorical glass to my 12-year-old self, who, at the time, thought this was the most romantic thing in the world but grew up to recognize it for the alarming red flag it truly is. At least I am displaying character development where these characters are not.

Edward plays Bella the song he wrote for her on the piano when she visits the Cullen house for the first time. I have nothing to say here, I just wanted to link to this TikTok, which is a work of art.

Chapter 21 is the one I’ve been waiting for: Bella accompanies Edward to the watch the Cullen family play baseball. It’s a moment in both the book and movie that I remember as fun and silly – a reprieve from all of the suffering. (The Muse soundtrack doesn’t hurt.) But, as it turns out, reading Edward’s mind-numbing descriptions of a notoriously slow sport – even at this elevated vampire level – is not at all exciting.

Finally, the nomad coven, which includes the evil tracker James who becomes obsessed with killing Bella, arrives, setting up the climax of the story. It takes 500 pages for the chief antagonist to show up in Midnight Sun. Twilight is only 498 pages. This is where my resolve starts to really fade: nothing that has come before this point has justified the longer page count and I’m dreading finding out why there are still 158 pages left in this book.

You’ll notice I’ve skipped right to the end. As I suspected, nothing new or interesting is revealed as Bella gets kidnapped and Edward must save her (again). It plays out exactly how I remember it, just with so much more wordy exposition. “I’m not worth it,” Edward finally tells Bella when she says she’s willing to give up everything for him. It’s an important reminder that when someone tells you they’re not worth it – and shows it with their actions – you should believe them. And maybe, when a series of books continues to prove itself unworthy of your time, you should believe that too.