Margaret Atwood Takes Readers Back to Gilead In "The Testaments"

The hotly anticipated Handmaid's Tale follow-up is out today. 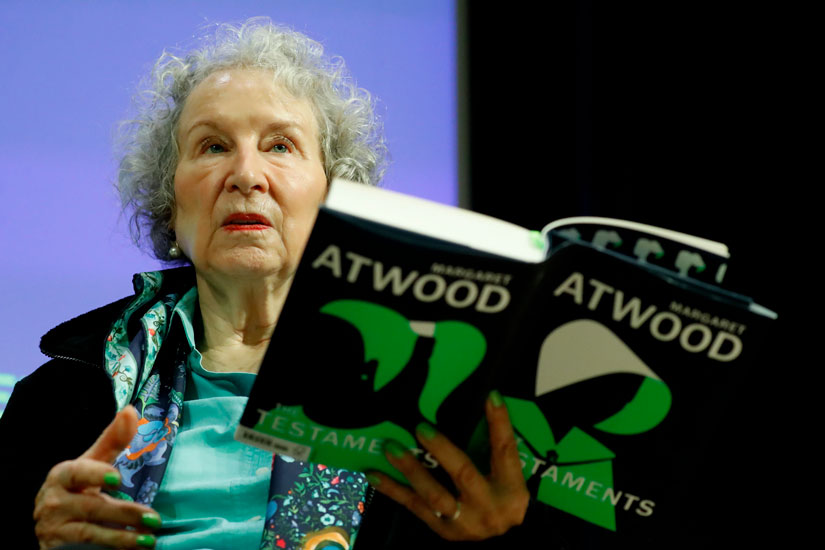 Two young women, standing silently with their heads bowed, greeted attendees of The Testaments press conference Tuesday morning in London, England, where author Margaret Atwood spoke for the first time about the highly anticipated follow-up to her dystopian fable, The Handmaid’s Tale.

Both women are ethereal in shining silver satin gowns falling to their ankles, their white headwear smaller and more subdued than Offred’s infamous imposing veil. The look is punctuated by tiny matching silver backpacks, at once nostalgic and perfectly modern, in line with the prairie subversiveness of Batsheva and the early aughts memorabilia making tracks on runways in recent seasons.

Margaret Atwood poses with Pearl Girls, new characters in The Handmaid’s Tale follow-up The Testaments, at the book launch in London, England.

There is a palpable excitement in the room, as The Handmaid’s Tale has taken on renewed interest amongst readers and critics alike both because of the award-winning television series starring Elisabeth Moss and the polarizing political climate that has reignited the fight over women’s bodily autonomy.

When she first conceived of the book in the early 1980s, Atwood worried she’d find it hard to convince people America could ever return to oppressive religious zealotry. But in 2019, many find the novel a searingly astute parable for our own social and political battlegrounds in a post-Trump world.

The book itself and the instantly recognizable costumes from the TV show (blood red robes and stark white hoods) have become mainstays of the protest movement aimed at fighting the erosion of reproductive rights across the globe, from Texas to Ireland. The outfits and the novel have become a type of shorthand for what some see as a movement to disempower half the world’s citizens. The Testaments, already shortlisted for the illustrious Booker Prize, has readers anxious to see how this tense, harrowing story, 34 years in the making, finally plays out.

The new novel had its international launch at midnight on Monday, September 9 to throngs of eager crowds in London, making it clear that Atwood is still a global tour de force, even as the author approaches her 80th birthday this November. When she takes the stage at the press conference Tuesday morning, someone in the usually reserved crowd of critics lets out a reverent gasp. She is still the kind of artist who can quite literally steal the breath from a room.

A scene from TV show, The Handmaid’s Tale. (Photo: Instagram.com/handmaidsonhulu)

When asked about why she decided to revisit the story of Gilead she remarks on how she kept returning to the idea as cultural and political sands shifted. “As time moved on instead of getting further away from Gilead, we moved closer towards it, especially in the U.S.,” she offers. “In the 90s I felt we were moving away from it [Gilead], but then 9/11 changed the chessboard. Then I started thinking about it more in 2008 after the world financial meltdown and much more in the run up to the 2016 U.S. election.”

And where The Handmaid’s Tale was an introduction to this dystopic world, The Testaments enters a conversation that’s already taking place. In an era of fake news, election tampering and withering abortion access, it’s not a stretch to imagine a country where the status quo places its most marginalized citizens at the heel of the privileged. The Testaments aims to tell the story of the beginning of that end.

Readers should not expect a direct continuation of Offred’s story. There’s no doubt in this book that we are in a different era of Gilead, even leaving behind the dramatic red robes of the old regime. Atwood signals this new change with a flash of her perfect lime-green manicure. “There’s been some costume changes,” she says. “As the regime changes you have to have new outfits.”

The Testaments also offers us three narrators in place of the singular voice of the handmaid. Aunt Lydia gives us a blistering perspective from inside the regime, Agnes is a second-generation citizen of Gilead and Daisy brings us an outsider’s view from across the border in Canada. Their three stories combine for a penetrating, often devastating look at the slow, creeping moral compromise that underlies oppression, picking apart the motivations of those who uphold the quiet, everyday brutality that allows an authoritarian regime to function and thrive.

Aunt Lydia is our Thomas Cromwell, amassing power where she can even as she becomes increasingly hostile towards the regime. Atwood brilliantly probes the keepers of rule asking how they justify it to themselves. It’s a perspective that seems ever more pertinent as you catch glimpses of the Trump administration’s reinforcement of aberrant behaviour that feels right out of political satire. How do you justify it to yourself?

Canadian readers will be particularly piqued by the Daisy narrative, as we so often find ourselves on the outside looking in at what we consider unimaginable social and political eruptions. But as the missionaries in Gilead make their way north, Testaments begs the question, how are we so different?

Nearing the end of the conference Atwood recalls that when The Handmaid’s Tale was first published, the three major English-speaking markets all had markedly different responses to the book. In the UK, she remembers they called it a “jolly good yarn.” In the U.S. they shook their heads and said, “well it would never happen here.” And in Canada we asked, “could it ever happen here?” With the clarity of hindsight, it seems like an especially out-of-touch question. We are not so different to our neighbours in the south, particularly in a globalized digital age. We struggle with similar issues and we have to ask ourselves similar questions.

And with an election looming that has Canadians looking closely at what we truly value and how we define ourselves, The Testaments is the perfect book to test our resolve against what we choose.

But for those who fear it’s all doom and gloom, Atwood reminds us that there is an inherent optimism even in the worst regimes because “they tend not to last.” And leaves us with, “Is The Handmaid’s Tale and The Testaments about a dystopian world? Let us hope so.”

Inspired by the true story of how librarians contributed to the war effort.

How deepening friendships, practising empathy and contemplating your purpose in life can help you live longer.