Journalist Taffy Brodesser-Akner Wrote the Book of the Summer 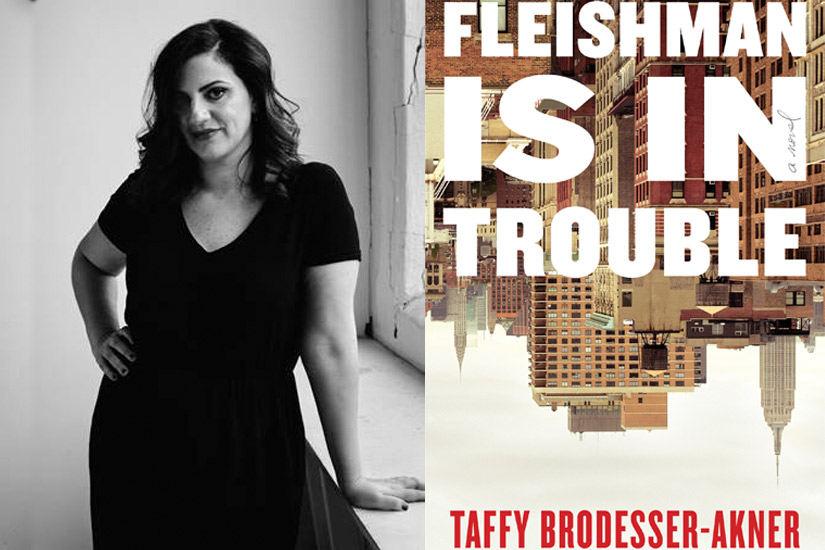 Journalist/author Taffy Brodesser-Akner has a morning routine: for the first hour that she’s awake, she stays in bed, drinking water and watching TV while doing leg lifts to help heal an old knee injury. She’s in the middle of that routine—which also ends up doubling as some handy life advice—when we reach her by phone in early June. “It took me until I was, like, 41 to be able to call myself on my own bullshit. I know if I don’t do this [exercise first thing], it’s not going to get done,” the now 43-year-old says. “But I did not know that until fairly recently.”

Even if you don’t recognize Brodesser-Akner’s name right away, you’re likely familiar with her work. She’s written for publications like GQ and the New York Times, penning witty and sharp (and often viral) celeb profiles on stars like Gwyneth Paltrow and Bradley Cooper (you know the one). Now, she’s gearing up for the publication of her first novel, Fleishman Is In Trouble (out June 18), which follows a recently separated doctor whose ex-wife leaves their two kids with him for a weekend and then disappears. It also means journo Brodesser-Akner has found herself on the opposite side of the table she usually sits.

Literally the day after I confirmed our interview, you tweeted: “A great thing for me to stop doing would be telling people who are interviewing me how I would write a profile of myself if I were me.” So I have to ask: How would you start?

[Laughs] I don’t know. Every time somebody’s asking me questions, I keep thinking in my head, “No wait, these are the wrong questions,” or “This is not how I would have started,” or “This is the thing you should be writing down.” It’s absolutely obnoxious and the reason I put out that tweet is because I’m so ashamed of this behaviour. My husband likes to say, “When you’re a hammer, everything is a nail,” and I think that’s a very poignant statement about not being able to do things differently. I’m often having conversations with friends and wondering what I would write about, which is a weird way to conduct yourself.

Let’s talk about the book. Where did the idea come from?

When I turned 40,  a lot of my friends started coming to me and telling me they were getting divorced. One day, I went to meet with one of them at lunch who I hadn’t seen in years and I said, “Oh, are you doing okay?” And he said, “I’m doing better than okay,” and showed me his phone. And on his phone were all of these women totally interested him, totally eager to see him. If you were dating in the ‘90s, that was right before major online dating took off; it was before smartphones and apps. So I wanted to write a book about the state of dating right now, then I realized I actually wanted to write a book about marriage and then I ended up writing a book about divorce.

But the way it became a book was right after that meeting, I called up one of my editors at GQ and said I’d love to do this story about divorce and online dating. And he told me the magazine doesn’t really do those things anymore, and I used to do those big stories. I literally got off the phone with him, sat down at a café and pulled my computer out. I don’t always travel with my computer, but I had it that day and I wrote the first 10 pages in, like, minutes. It just came to me fully formed like that.

What were you able to do differently by turning the idea into a novel instead of making it a feature?

I was able to mix things up, which is a danger. In making people up, there’s the freedom of not being obligated to a person, of not worrying that I’m betraying somebody—which I can never do when I write profiles. I really come at it with a lot of compassion for how hard it must be to be written about. I’m certainly feeling that now. That’s what that tweet was more than anything: my need to control things. The first time I sat down with a reporter, it was like an abyss. Not only do I know that I have no control here, but I know exactly how much control the other person has in shaping my narrative. And it’s terrifying.

As a journalist, how does it feel to now be the one being written about?

I mean, it’s so strange. It’s surreal to me, like being in a weird dream. An anxiety dream where you’re interviewing someone and you realize, “I don’t know how to do this, I don’t know how to answer questions with a stranger and not be thinking about the next question to ask them.” It’s like muscle memory, but twisted. I’m sitting here with you, we’re talking and I’m supposed to just answer questions.

The secret to my success is that I have none of that. I have no routine, I have no preference. I’ve written stories on airplanes, in the bathroom lounge at Nordstrom, in the carpool lane picking up my kids. It feels like a very male idea to have a place, a time, a need for inspiration. If I left my success up to those devices, I would be in so much trouble. I would never get anything done. Why do we talk about our jobs as if they are bent on inspiration?

Do you ever get writer’s block?

I don’t believe in writer’s block. I think it’s the act of thinking about writing instead of doing it. Sometimes I write bad things, but I know that there’s always a next sentence available. Sometimes I have a hard time figuring something out, but I’m just so lucky with the editors I have that I feel very safe to make mistakes knowing that they’ll save me.

Is there a dream celebrity profile you want to do?

I’d love to do Courtney Love, I’d love to do Melania Trump. But Gwyneth Paltrow was my white whale for a very long time, and it has been very hard to replace her in my heart. I wanted to do her for years and years, and finally I did—and also Bradley Cooper, by the way. But Gwyneth, nobody has risen to that standard for me. But it’s only been a year.

Do you think you’ll write another book?

I’m already on the hook for it. I sold it a few months ago. It’s called Long Island Compromise. It’s the first book that I wrote, so it’s half written. I just re-read it and didn’t like any of it, so I’m going to re-write it.